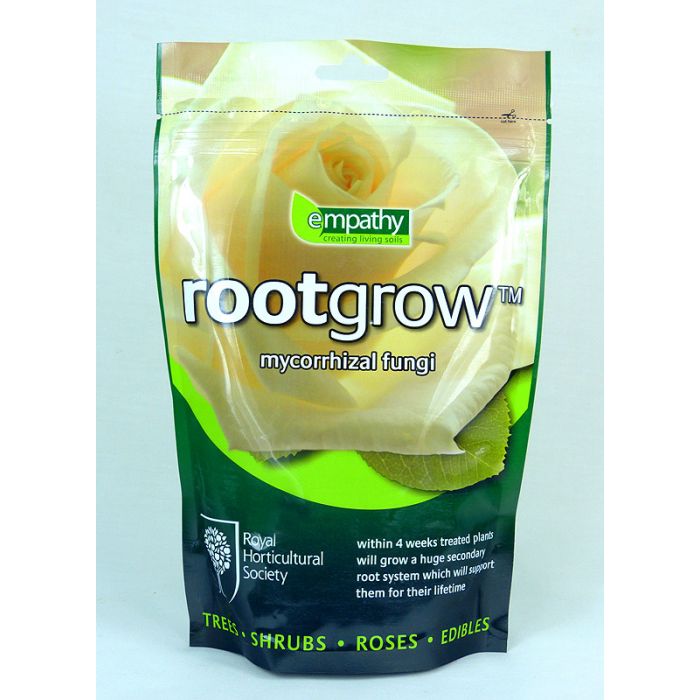 There can be few folk in bonsai today that are not aware of the beneficial relationships most plants share with fungi. For bonsai trees growing in pots these fungi cannot easily become established and so it is extremely helpful to seed them directly into your plants root system at repotting time. Rootgrow™ is a revolutionary organic product that enables virtually all garden plants to withstand drought, take up nutrients better and resist soil diseases particularly re-potting syndrome in Bonsai. Contains natural U.K origin mycorrhizal fungi. Simply sprinkle into your bonsai trees root system at repotting time and within one month the plants roots will be colonised by a secondary fungal root system that will extend out into the soil increasing the size of the roots hundreds of times over.

Only one simple application required during the plants lifetime.

Plants, Fungi and the Underground Internet

Image on the pack may vary from that shown but will be a factory sealed brand new re-sealable package. We do NOT supply decanted product.

Information supplied by the manufacturer....

Mycorrhizal fungi are a remarkable group of organisms that have been benefiting plants for at least 500 million years.

At the dawn of time when plants were just beginning to colonise our planet mycorrhizal fungi were there living in a symbiotic relationship with plants enabling them to extract nutrients and hold onto water in very difficult soil conditions.

In effect, the fungus provides a secondary root system, a system that is considerably more efficient and extensive than the plants own root system.

These fungi are living organisms and will live with the plant, sourcing a continued nutrient supply for its entire lifetime – a truly sustainable plant nutrition solution. In exchange the plant provides carbon and sugars to the fungi. Not unsurprisingly, 90% of all land plants employ this relationship to enhance their own root system’s capacity to deliver nutrients.

Rootgrow contains a mixture of species of UK origin mycorrhizal fungi. These fungi are completely natural and are grown at our production facilities in Kent. rootgrowTM also contains an inert clay carrier which acts as a substrate for the fungi to grow through and a few bio-additives which enhance mycorrhizal colonisation.

Why do I need rootgrow™?
All plant roots in all soils have a relationship with a staggering array of microorganisms, one of the most important families of these microorganism are the mycorrhizal fungi.

Most gardeners buy or raise plants in sterile composts where the plants have easy access to the essential nutrients, however as soon as they are planted into soil, the root environment changes radically which can lead to plant failure and poor growth.

In most soils there simply are not enough of native mycorrhizal fungi close to the new plants roots to colonise fast enough to show the incredible range of benefits complete colonisation can achieve.

This is why it is so important to use rootgrowTM. Just 1 teaspoon can contain up to 5000 pieces of fungi all ready to explode into growth, colonising every millimetre of a plants roots in a matter of days.

A new plant with a fully functioning mycorrhizal root system will have the best chance of becoming the rewarding plant gardeners so passionately want to thrive in their gardens.

The benefits of rootgrow™ mycorrhizal fungi

In summary the benefits include

The roots of a mature Beech tree laid out end to end would stretch for 5 miles, the mycorrhizal hyphae responsible for feeding that tree would stretch around the globe!

Hyphal network can be in excess of 100 metres of hyphae per cubic centimetre.

Glomalin, a sticky glue like substance exuded by the fungi is locking up one third of the worlds carbon underground. It also binds soil particles together that results in good soil structure.

Pine trees and conifers would not exist on Earth without the association with mycorrhizal fungi – imagine the Earth without forests!

Some of mycorrhizal fungi produce mushrooms used in cooking, including the Cep and Chanterelle, delicious!

The largest single living organism on Earth (by area) is said to be an Armillaria fungi covering almost 2,200 acres in a forest in Oregon, North America – awesome! Humongus Fungus!
Click here