Getting Bonsai Hawthorns to flower

Crataegus monogyna is a small tree native to the U.K, and parts of Europe, that has come to be known by many names. Hawthorn, May tree, quickthorn, whitethorn, haegthorn, hedgethorn, bread-and-cheese tree and, most evocative of all Moon flower. The tree is steeped in folklore from being a meeting place of enchanting spirits to a protection against evil spirits. Its use in traditional medicine is primarily to improve circulation and heart stimulation…..among a great deal of other things!

The hawthorn is one of the most familiar trees in the U.K and can be seen in a million miles of hedgerow as well as woodlands, wetlands, moors and mountains. Every spring we are thrilled to see it's fresh bright green spring foliage and in May a spectacular display of white flowers that light up the country side. 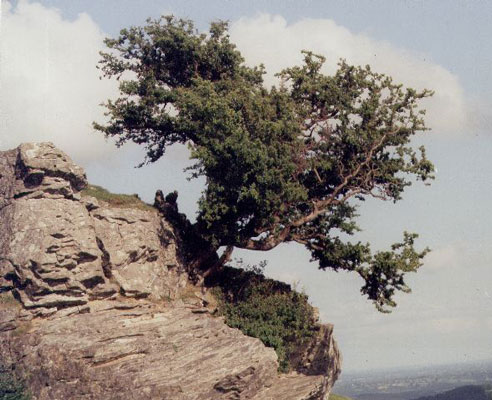 Hawthorn growing on the edge of the Welsh mountains.

Hawthorn has to be our finest native deciduous species for use in bonsai, however, there is always some trouble in paradise…..The species exhibits two characteristics that often conspire to spoil our enjoyment and reward for the work we expend. Firstly the tree has a habit of forming heavy knuckles around the ends of the twigs where pruning is carried out year on year. Secondly many trees refuse to flower or only flower occasionally. 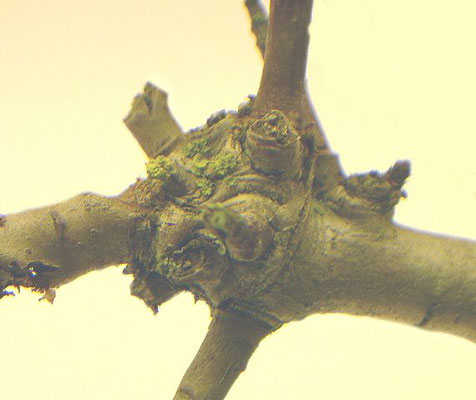 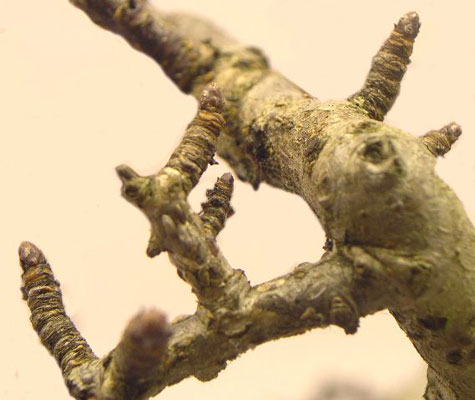 Fortunately both of these poor characteristics can be remedied with a single technique. I have heard many theories concerning how to make the species flower, some are just old wives tales and others are downright barbaric. In bonsai we have to encourage the tree to be beautiful rather than FORCING it into submission. This will ensure long term success. 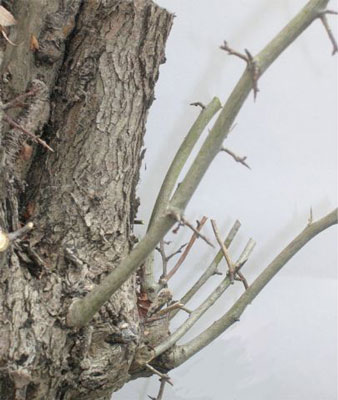 In order to ensure success with hawthorn it is necessary to look at some old pruning techniques for fruit trees from the past, but first we need to understand the growth habit of the tree.
Grown in favourable conditions the tree will endeavour to expand rapidly by way of strong, vigorous, fast growing smooth branches traditionally termed 'water shoots'. These do not exhibit any side branching of note and are apical dominant. A more mature tree or one growing in a more restrained situation will produce less water shoots and more short stubby branches which are not overtly apical dominant. Finally we have little fruiting spurs. These are short, stubby and generally have larger buds at their tip.
Hawthorns grow with relatively short nodes and so produce many buds. Depending upon the hormonal messages that the bud receives it can develop into leaves, a flowering spur, a secondary branch, a water shoot or perhaps just a thorn. Controlling these hormonal messages within the tree will ensure good characterfull development and as a side benefit…..flowering.

Often when we collect old hawthorn they will flower very well but this declines over a few seasons. This happens because the trees situation will have improved and it gradually reverts to a 'juvenile' state of expansion growth. Over time energy is diverted away from mature fruiting growth towards expansion growth and flowering quickly declines.

The following technique should only be applied to relatively mature trees with a fair level of secondary branching, not raw material in need of primary branch growth etc'. The hawthorn resents root disturbance and will only normally need to be re-potted every 3-5 years. Fertilise the tree very well from February (late winter) until late autumn with a balanced fertiliser. 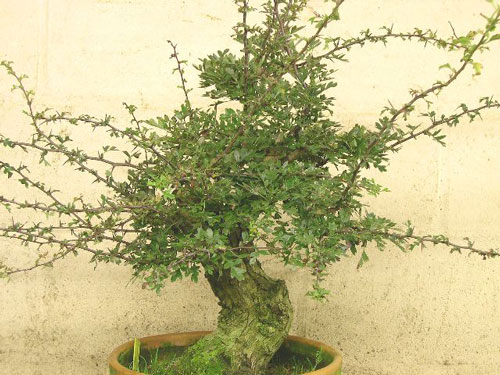 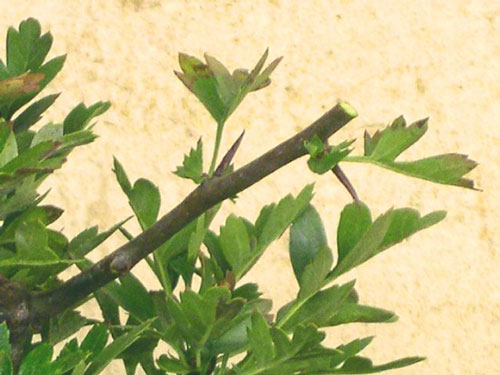 When summer pruning leave the shoot a little longer than necessary. 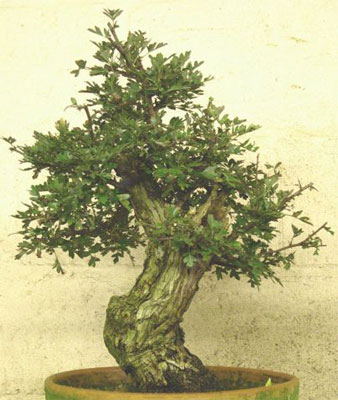 Following pruning of the first break of growth. 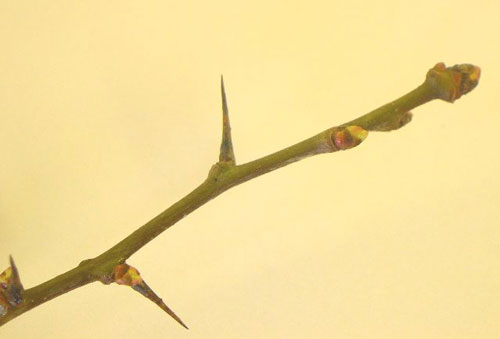 In late winter the previous seasons second break will exhibit strong apical buds that need to be pruned away. 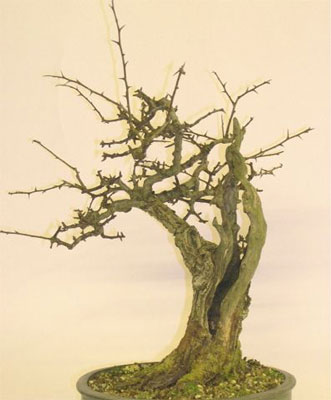 In late winter we need to prune the overly long shoots to balance vigour. 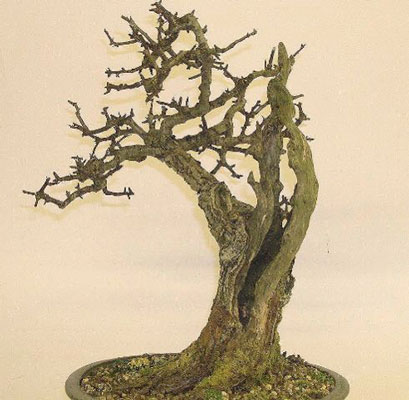 Following pruning the tree will equally distribute it's energy.

In the initial years of using this technique your tree is going to look a little out of shape for much of the time, as the tree matures and ramification increases the situation will improve greatly.
The technique relies upon controlling apical dominance and will evenly distribute energy throughout the tree whilst allowing it to still fuel strong growth and maintain vigour. The whole crux of the idea is that the secondary growth will mature over the autumn and early winter. Strong apical buds will form at the end of the shoots. In late winter these are removed and as a result the tree will fuel development of all growing points rather than just the branch tips. In the first season you will not see flowering but in the second year it should begin and will subsequently increase. A strong healthy tree will easily make two breaks of growth in a season as long as you prune the first break fairly quickly.

The final question that remains is how to stop the birds from stealing the attractive autumn berries? 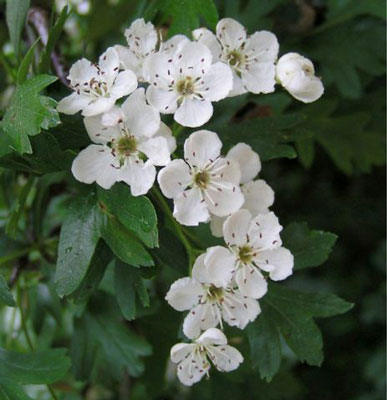 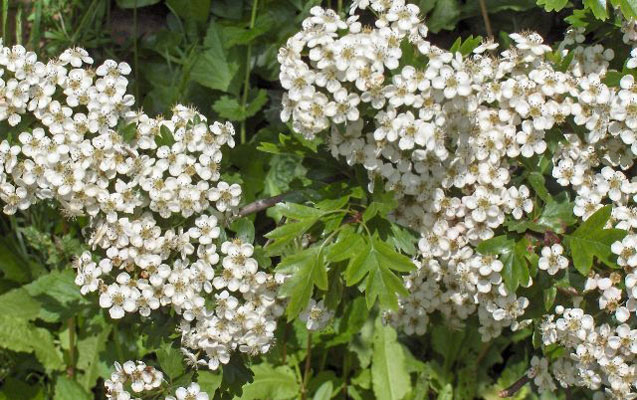 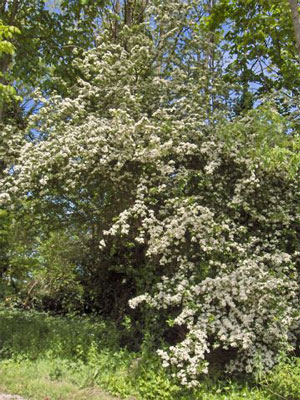