A Tale of Flowers & Friends

No ‘bloke’ would admit to owning a bonsai tree just because he liked the flowers. I know we are all supposed to have our radar tuned to ‘sensitive’ these days but bonsai, in many circles, remains a macho sort of pastime for ‘real men’. I was bought up in a place where flowers were for girls. But take a look around social media at this time of year and bonsai pages are awash with images of flowers. There’s a mixed message here perhaps but in my book flowers on bonsai trees are great so long as the bonsai beneath is a good one.

These days a lot of plants go through my hands, in excess of fifteen hundred a year typically. Because of that I don’t really develop attachments to bonsai as easily as perhaps I once did. These days I have to put a lot of work into a tree, over several years, before I succumb to it’s charms. Of the three thousand odd trees on the nursery there are only perhaps half a dozen I hang onto for anything other than business.
This particular blackthorn has a story and I now intend on keeping it. Way back in the mists of time when I had hair and a waist and before Kaizen Bonsai was even thought of I wanted to have good bonsai but, was so poor I didn’t have a pot to piss in or a window to throw it out of. Getting what I wanted was going to take some ingenuity and hard work. I met a guy who had some blackthorn for sale and trusted me enough to do a sale or return deal on six of them. Amazingly within the week they were all sold and I got to keep one from the proceeds. This particular example was sold to what became one of my life’s best friends. Graham Black, a cantankerous old sod and wily character who taught me so much about life and gave me so much strength, courage and confidence I sorely lacked at the time. I can confidently say I would not be here today doing this if it were not for Blacky.
Much like me Blacky ploughed his own furrow in life, didn’t suffer fools and was opinionated to a fault. Plain speaking folk are my favourite kind and Blacky did plenty of that to my sorry snivelling face back then. The influence of this man in my life was simply massive. Blacky’s passion for bonsai was simply enormous unlike his skill. He enjoyed bonsai in his imagination, seeing clearly what the trees he had would become in umpteen years time. They never really made it though because he kept changing his mind and didn’t learn the requisite patience bonsai demands. However amongst all his wonderful failed and mis-guided endeavours this little blackthorn remained untouched by and large. Respect for an old tree is a rare commodity these days but old folk may have learned a thing or two.
The tree actually made it into one of John Hanby’s Newstead events and got immortalised in the book too with Blacky’s imaginative display complete with a scroll depicting pit-head winding gear in deference to it’s Welsh heritage. A few years later my good friend moved away to Portugal and his trees were left with me to sell. Several, including this thorn were disseminated amongst our mutual friends and I reluctantly let this one go. Then a couple of years ago Blacky passed away and left a massive hole in my life, there is not a day goes by I don’t think of him and rely upon lessons he taught me.
Imagine my delight when late last year my other good friend Stu’ returned the blackthorn to me. Thankfully he had kept it nice and it still looked just like it did when Blacky handed it to me. It’s here to stay now amongst the other half dozen trees I hold special and it can be planted on my grave when I’m gone. I have always thought bonsai should tell a tale and for me this one certainly ticks all the boxes even though in reality it’s only mediocre but, much like Bagpuss and Emily I love it.
G. 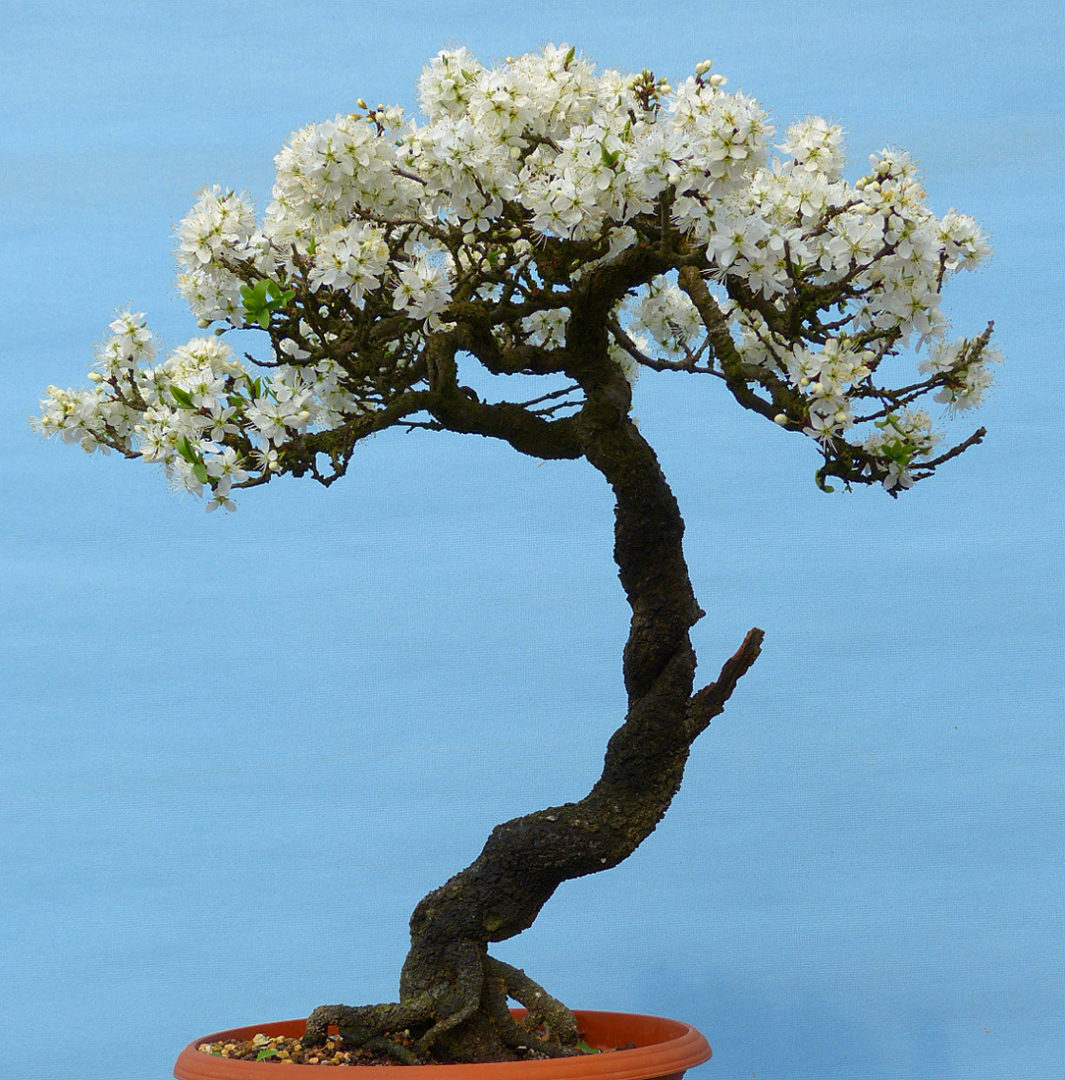 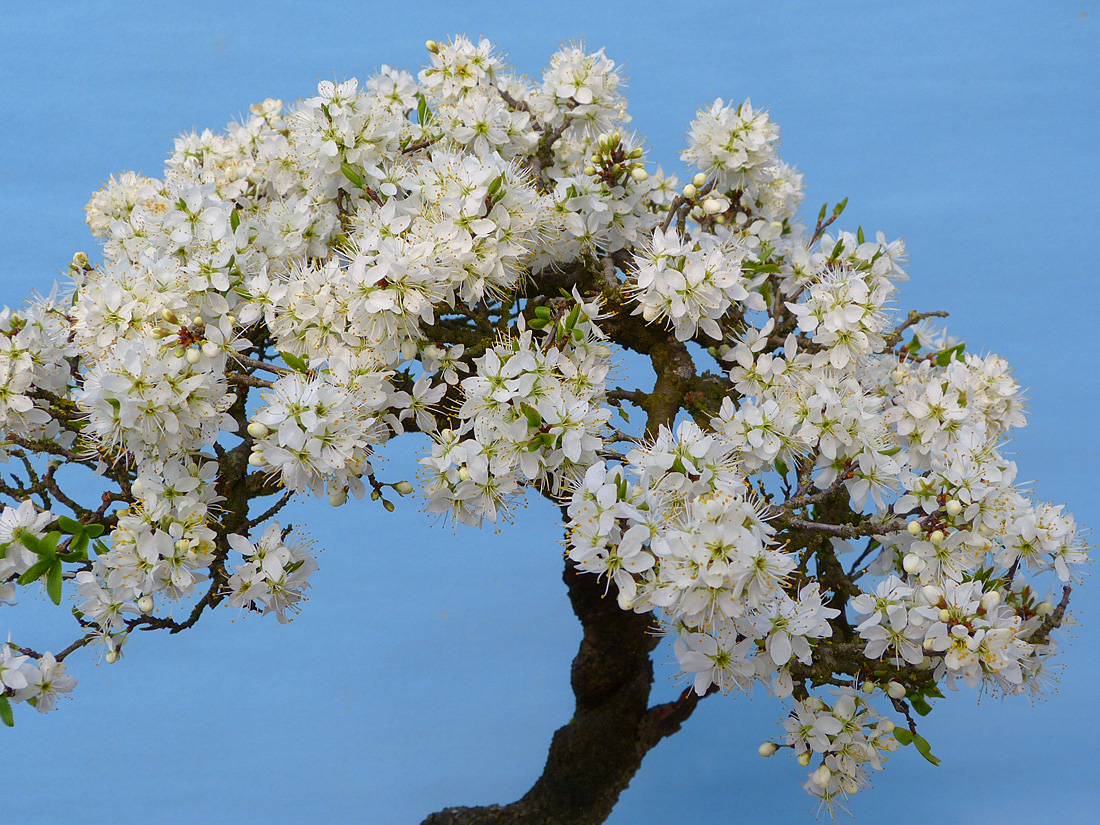 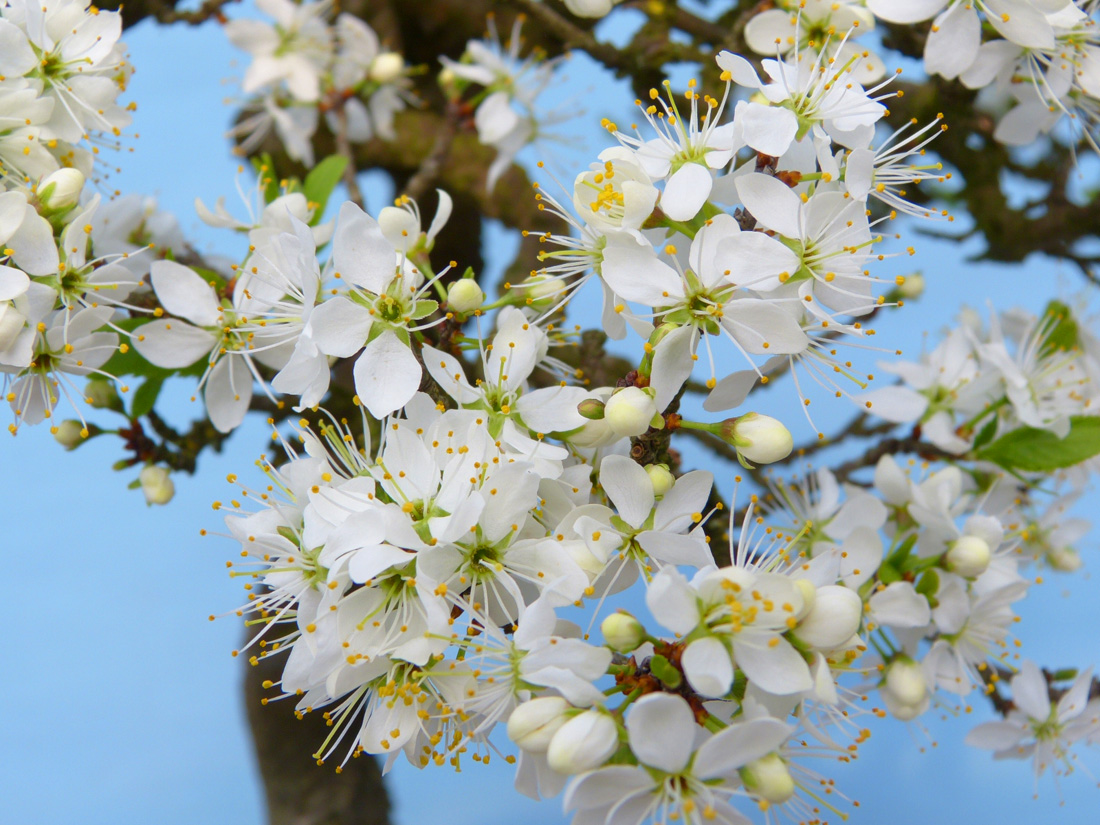