Coming off the back of our most successful year ever you would think I could allow myself the luxury of easing up a bit but that’s just not possible. As a business we are facing new challenges all the time and have to constantly be innovating, developing new products and finding smarter ways of doing what we do. I am always working on what we will be doing next year and beyond, this year is already ancient history. At the moment we are being mauled by unfavourable exchange rates. For instance the cost of the Yen has increased to us by over 35% since spring. That effectively means Japanese goods are now out of our reach as the increased cost would mean the retail cost of a typical pair of Masakuni scissors would go from around £75 to £98 even though the Japanese offer price remains the same. In my opinion that’s not going to fly. I am not about to go and spend large amounts of money on goods I can’t sell. It’s not the fault of the Japanese, they have not really had any price increases for decades now. The problem is that in the face of political uncertainty around the western world spineless currency dealers made a run for the safe and stable Yen and increased the value of it. Alongside that most large world currencies have taken a bit of a hammering this year. Don’t expect many bargains from Japanese tree importers next year!

I am not worried at all. We have been in this position before. The Yen is currently around the 130 to 1 GBP, in 2008 it was as low as 115 to 1 GBP and we survived just fine. What I think we, and the western world as a whole, have seen this year is the end of stable or falling prices. I know everyone thinks bonsai stuff is expensive and it may well be in relation to some other hobbies but then everything is produced in small numbers by comparison. It’s estimated that 20% of the UK population has been freshwater fishing in the UK in the last two years, that’s about thirteen million people. Kaizen Bonsai have been trading for close to fifteen years now and are by far the largest UK mail order bonsai company and our extensive mailing list, which stretches back to the mid 1990s has around twenty five thousand previous UK customers listed. There are a lot more people buying floats and maggots than buy bonsai stuff. But, here is something interesting…..

Money is constantly devaluing. Anyone over 50 remembers when you could fill you car up with petrol for £5-7. I used to drive a big three litre car to work every day, about seven mile round trip and it cost me £4.50 a week. I bought my first house for £16,000. My first job paid less than £50 a week. However my dad who is in his mid seventies bought his first house for £1800 and his first wage was less than £4 a week. I would say that on average money decreases in value (what you can buy for it) by half every fifteen to twenty years. However the price of most retail goods has been steadily falling since the last war relative to wages, times have been good.

I have right here in front of me a Bonsai Mart catalogue from 1996/7. Some of you may remember that was the business set up by the renowned Colin Lewis and run by his then wife Imelda before being acquired by us in 2004. This was pre internet, there is no web site or email address or even a cell phone number printed anywhere, wonderful times for those of us who remember 😉 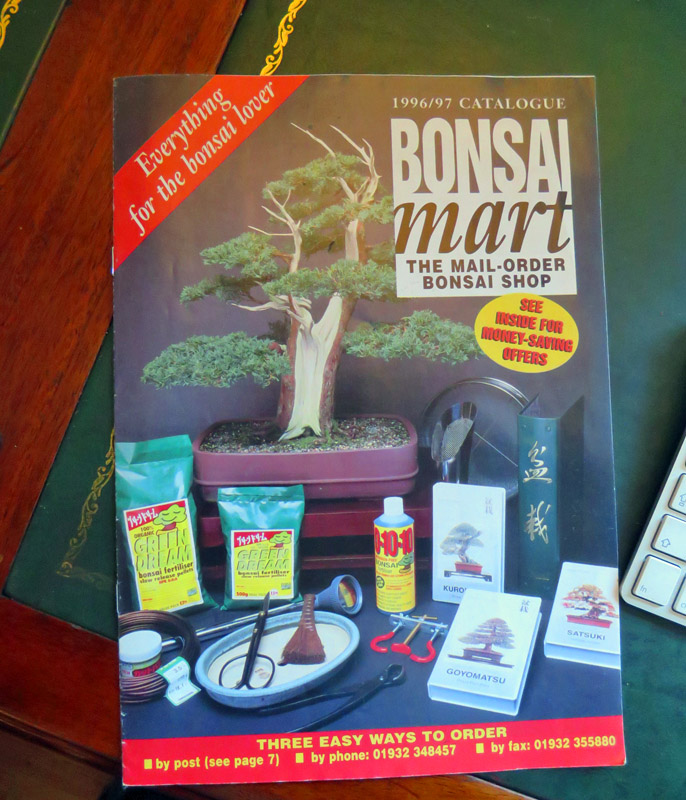 The business was not VAT registered.

Here are a few examples (of many) of prices for products we still offer alongside the current price….

NOW HERE’S THE SHOCKING BIT! Our prices include a whopping 1/5 or 20% VAT so working that back a 500g roll of wire now actually sells for as low as £7.92 (that’s the price Kaizen Bonsai gets after VAT) WHICH IS ALMOST HALF THE PRICE IT WAS 21 YEARS AGO! It’s actually less than the wholesale price was back then too.

The way we have managed to do all this is my little secret. The end result is that creating and keeping beautiful bonsai trees has NEVER been cheaper than it is today. Price rises are inevitable over the next few years but we are beavering away behind the scenes to make sure the effects of global economic turmoil are mitigated as far as possible. If you look back over some old bonsai magazines from the last twenty years notice how many of the vendors advertising have disappeared. That’s, by and large, because they did not make enough money to stay in business. Profit is a dirty word in bonsai circles but any company that does not make it will quickly succumb. Rest assured we will still be here for decades to come and most of the profit we do make will be ploughed back into our business so we can continue to develop new products and continue to offer our great range of products at fair prices. All thanks to you and your support of course!

In conclusion, don’t be fooled by media coverage of the global financial situation. They like to create hysteria about such matters. I recently heard a BBC reporter telling of a one day “collapse” in the value of the British pound against the Euro. In actual fact the daily loss was less than 0.5%, hardly what I would call a collapse, and two days later there was a 1% nett gain which, not surprisingly, they failed to mention. Unlike politicians and media pundits business people and manufacturers are a canny bunch and ALWAYS come up with creative and clever ways of doing business and keeping the world working. We don’t need ‘trade deals’ or political interference, as long as there is a demand out there we will be meeting it in an intelligent and ultimately profitable way for the good of everyone concerned so, ignore the scaremongering and be happy 😉