It’s been said many times that I have the best job in the world but I am a ‘glass half empty’ kind of bloke and find it hard to get too excited about what I do. I typically spend 7 hours a day in front to a screen, a business this size requires a lot of admin’ and I despise every minute of it. I spend about 2 hours a week doing bonsai. Back when I worked for a wage I got to spend a minimum of 6 hours a day, seven days a week working on bonsai. The demands on my time have become critical of late. To parody an old Fast Show sketch, this week I har’ mostly been answering stupid questions.

I have been teaching bonsai professionally for close on fifteen years now. In that time I have been privileged to travel to a lot of cool places and meet a lot of motivated people who love their bonsai and do whatever it takes to help them thrive. It has been a double edged sword. On one hand it is my greatest joy in life to open the door for someone who genuinely learns and goes forward with the kernel of an idea and combines it with their experience to do greater things than I have managed. On the other hand I tend towards self harm trying to battle the overwhelming tsunami of ignorance that assaults my inbox and telephone every day.

I am no technophobe or luddite (maybe just a little). Technology is a tool like any other, it helps us do a job like me running my business. However what I do absolutely hate is the pointless integration of technology into our lives in order to take up our time doing things that do not need to be done. I get a lot of very angry folk chewing my ass because I don’t use Facebook. I have had an outpouring of hatred thrown at me because I do not use Twitter. It honestly beggars belief how ugly people can be. I am not as thick skinned as I would like and these things hurt. All I wanted to do was have a few nice bonsai sitting around my pond.

I have a perennial problem: as a business owner I need to have my business in the public eye but on a personal level I am a socially inept clodhopper, my greatest joy is to be on my own. I get calls from prior to 8am to gone 10pm and Yanks calling me up at 2 or 3am asking for my advice. We have no social or personal life as a result of this continual intrusion. When I stop answering the telephone the outpouring of vitriol on the answer machine is very upsetting, working from home sucks ass!

ANYHOW! Having got that of my chest here is the point of this diatribe. For the last month I have been inundated with emails and phone calls from breathless people panicking about their bonsai dying fast and ugly. Now, first off, in 25 years of mucking about with bonsai i have NEVER seen a tree die quickly without help. Everything a plant does happens slowly and not without warning. Because folk spend too much time reading unqualified opinion on the web of lies most have absolutely no ability to read their plants. All plants are extremely expressive but I have only ever met a few individuals that are capable of speaking ‘plant’. Way back in the early days I would just sit in my workshop for hours doing nothing other than being with my trees. I would get up in the night and go sit outside with my plants, smell the air and feel the wet grass under my bare feet. Over years I learned a massive amount about plants simply by experiencing what they experience. There is more to be learned about soil by feel and smell that your eyes will ever give you. Everything we need to know about bonsai is written in the world around us, they are just plants. There is no artistic or cultural element of bonsai that cannot be learned from observation and experience of the world around us. The trouble is there is too much noise in the world today and the really important elements of life are simply overwhelmed and drowned out by the cacophony of white noise.

My point is that if you turn off the noise and learn to love and experience your trees you will not have the stupid questions or need to seek the obvious answers I am being badgered for every day. By listening to the nonsense and bullshit, folk spend all day reading and understand less than when they started. Everyone ends up so bewildered they come to entirely ridiculous conclusions on what needs to be done to their poor suffering little trees. I have been swamped with requests for soil this summer and with questions about re-potting bonsai. Now for some evergreens summer is the prefered re-potting season but for broad leaf trees it’s almost certain death.

Everything we do in bonsai is done for a reason but before applying any technique it is important to decide exactly what it is we want to achieve in the best interests of our tree. I have lost count of the number of people stating their tree ‘NEEDS‘ to be re-potted because the soil is not draining. NOT ALL BONSAI NEED FREE DRAINING SOIL. In fact free draining soil can be very counter productive. Encouraging rapid growth in raw material requires open soil and a lot of it but getting the ultimate level of refinement on old bonsai means learning a higher level of care and skill with dense root systems and NOT re-potting very often. A few years ago I sold the most beautiful Japanese maple to a guy I know that has close to 40 years growing bonsai. This was a very old bonsai from Japan cultivated for decades in a tiny pot. The tree had THE MOST stunning ramification which all naturally turned up to the light. A tree in the quite of life just happy leafing out every spring and being beautiful. The first thing the new owner did was decide it needed re-potting and ripped off 10 years of impossibly important root development and put the tree in a larger pot with free draining soil. In the last few years that beautiful old work of art has been converted into raw material. All the breathtaking old ramification has gone. The tiny internodes and lace work of twigs have been replaced by 2 and three inch internodes, leaves the size of beer mats and the tree is ugly with no hint of it’s former magic. The term ‘Bull in a china shop’ is very appropriate. Everyone who buys a tree just ‘has’ to change the soil and piss about all the time. When you get a new tree have a little respect for those that came before you, keep it a year or two and just watch what happens, learn about the tree rather than just storming in.

Most of the tale of woe I have heard these last few weeks have been the result of chronically over wet soil. So everyones IMMEDIATE reaction is

I am very well aware of the problems of poor soil, we move close to three thousand bonsai a year now, it’s nothing new to me but here is a news flash….

If you tree’s soil is too wet don’t water so often.

Why do we assume that if the soil is wet we have to change it. Just put in a bit less water or leave longer between watering, it’s not rocket science folk!

There is a point at which we need to re-pot, obviously, but not at the wrong time when it will endanger the plant. A little common sense (not so common) goes a long way here. It is perfectly possible and sometimes even desirable to leave a tree in very poor soil, for instance if the tree is weak, for a long time in order for it to gain strength before re-potting. However we have to manage that soil in order that its poor condition is not of detriment to the plant. One way in which this is done is frequency of watering.

In all my years of being around bonsai i have only ever met two folk who know how to water properly, I won’t tell you who they are and the detail is for another day. Suffice to say if you do not water properly you will NEVER, in a million years, be successful at cultivating bonsai trees. SO, here is the secret, the golden rule and the single most important element in bonsai success….

Bonsai trees need to be allowed to dry out JUST a smidge between waterings. Understanding how to do this is the work of a life time but here is a little cheat that will solve ALL your watering issues. Grow a little weed in your bonsai’s pot. When the weed wilts it’s time to water. If you have conifers like pine or evergreens like olive water 12 hours after the weed wilts. Once you master this it will not be necessary to re-pot, often for years on end but your bonsai will just get better and better. Re-potting is only required when the plant has filled the pot with root and the situation becomes critical. The degradation of the soil medium is NEVER a reason to repot bonsai! 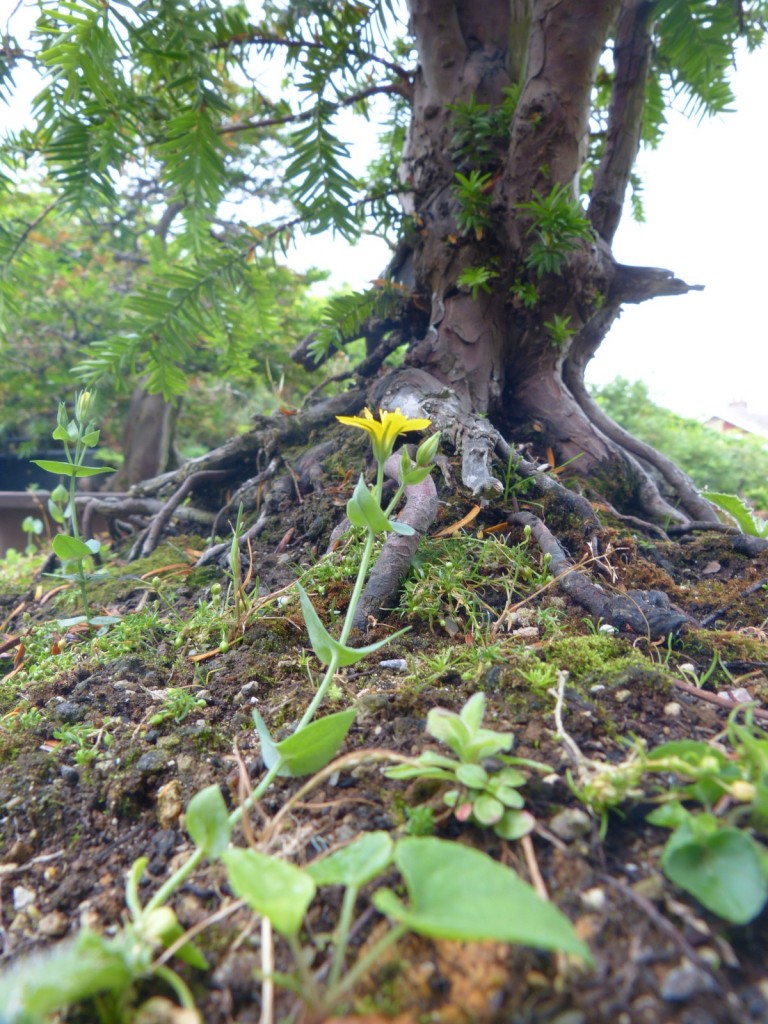 The most important tool in bonsai cultivation!