Over the years, many would say, I have been lucky to have some pretty nice plants. However nice stuff does not just find me, i have to graft for every last piece. I gave up my job and put my family home on the line. Nothing we have came easy, life just isn’t that simple. Rich Hall said ‘Good things come to those who wait, shit pretty much turns up straight away’.

I remember years ago talking with a friend who wanted a yew tree. We had a look at my stock but he refused to pay £140 for a tree I had ‘just dug up’. I agreed to take him out so he could dig one up himself. On the appointed day I rocked up at 7am. We took off to the site an hour and a half away. On arrival we walked a couple of miles but didn’t find anything. Another area and another couple of miles and still nothing. In the afternoon we headed for a spot I had been to before. After about a mile and a half we arrived at the location and after an hour poking around my friend found a tree he liked. He didn’t ask my advice on how to get it out of the ground and so I left him to it. Forty five minutes later I returned with a couple of trees on my back. My friends yew tree was still standing firmly rooted to the spot and he was laying on the ground chuffing and puffing like an old lawn mower. I sat on a stump just to watch the show and after another three quarters of an hour he had the tree out of the hole. Another hour saw its root ball trimmed and bagged. Now all that remained was the mile or so hike back to the van. Watching a sixty year old guy struggle under a 30Kg load of tree through the undergrowth was the highlight of my day. There is a knack to all these things but my amusing friend had none of the requisite experience or skills. On the trip home I drove along to the mellow soundtrack of snoring. We arrived back about six and it took my buddy another hour and a half to wrestle his prize into a bucket. After that it was going to be a frustrating wait to see if the tree would survive and then another couple of years before it was ready to work. The next day he came over and gave me £140 for my tree and donated his new stump to the cause.

The work, skill and time it takes to create bonsai are never reflected in the selling price. Unless you work for a pittance a day it’ll never pay. As I have gotten older I discovered there are a few easier ways of doing things. I get a lot of people arguing with me but I did the same with my dad when I was a kid. As I turned twenty eight I figured out my pop was not the numpty I once thought. I no longer spend all my time out walking around the woods only to arrive home twelve hours later with a van full of worthless shit and blisters. These days I get my worthless shit delivered, as happened yesterday.

I have a good contact (or two) in the form of a local tree guy and landscaper who calls me every time he has something interesting. This time it was a yew hedge. A better class of shit from normal. The last time I got a yew hedge it consisted of about a hundred plants from a US airbase. I was practically strip searched just to get on site. After two days of hard graft on my own all the tree were in pots. In the end only two survived and I had to pay £100 for a skip to dispose of all the dead stuff. NEVER move yew trees in winter! One of the two survivors sold for £150 and the other I gave away. So I ended up, all told about £500 in the hole on that one. Thankfully this latest deliver is at the perfect time for moving taxus, mid April to mid May so I am confident they will be fine.

A tipper truck full of yew takes a lot of processing and I am extremely grateful for the assistance of Kaizen Bonsai’s unsung and unseen heroes for helping me out with this pile. Without the efforts of my parents Kaizen Bonsai would simply not exist. It took four of us a quarter ton of soil a saw chain and sixteen man hours to process this tangled mass which netted fifty nice stumps. I have done a similar job on my own in the past and I had to work twenty four hours non stop. Now I have to go to the tip with three vans full of leftovers which will take most of the day. My landscaper goes away with a grin from ear to ear every time I press a wad of crumpled notes into his hand and for all I know these could all die but ‘nothing ventured, nothing gained’. 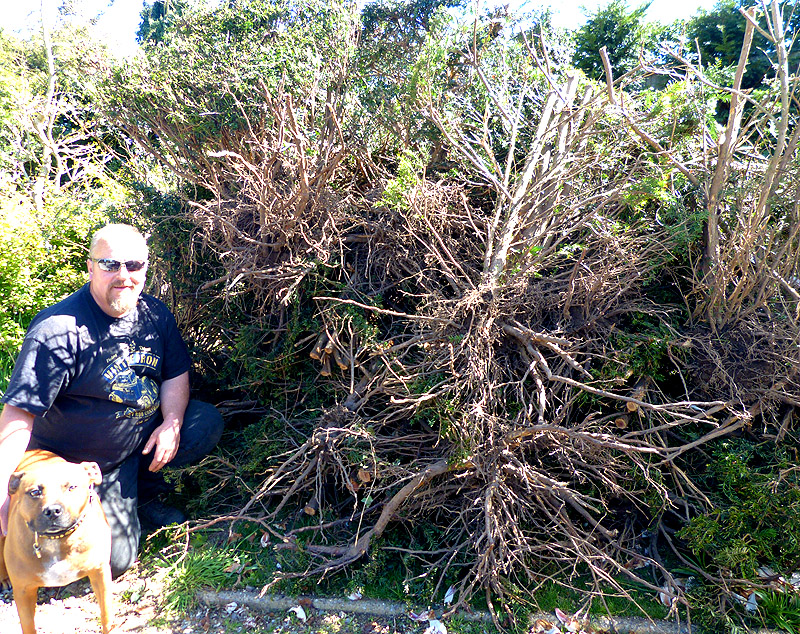 General
New Delivery of Oak Trees
Get a New Tool