I have reached that age where I face an ever increasing past and a diminishing future. Doesn’t really matter because I can’t see shit without Catherine’s glasses. However I have noticed there is one very valuable benefit of being older, one readily overlooked in our youth obsessed culture and that’s experience. Everything I have ever done was self taught. I spent 20 years in the print industry having taught myself to use a printing press. I have worked on cars and bikes all my life, again entirely self taught. I rebuilt a mini engine when I was ten years old. It never ran because I only had the engine and was missing the mini but it all went back together with no parts left over. In fact I did a whole bunch of stuff over the years based on a little study and some logical thinking. It’s not that I was some kind of child prodigy. I was broke and had no mates so with time on my hands and an active imagination I found a lot of, non academic, things within easy reach. I kind of fell into bonsai the same way. Facing straitened circumstances at the time it seemed like a cheap hobby I could do rather than building hot rod cars and bikes.

When I was in junior school I had a great interest in mucking about. I did very little work and learned the art of bullshitting my way out of trouble. In the final year at that school my tardiness began to catch up with me. I had a form teacher from the old school who believed a little humiliation was the answer to an obstinate boys idle ways. Standing me up in front of the class and poking me in the chest uttering those immortal words “Stupid boy”, like some Captain Mainwaring wannabe as the whole class fell about laughing. My response? From the very first day I made it my only purpose in life to show that bitter old man just HOW stupid a boy could be. It kind of ruined any hope I had of a career in academia but as a kid I couldn’t find my own arse with both hands and a map. However one good thing came out of this experience, a very stubborn streak. This has enabled me to endure some tough times and also allowed me to swim against the tide when I need too.

Now I am knocking on a bit I have noticed a tendency to be a little more careful and thoughtful about what I do. It’s not that I am worried about falling over and breaking a hip, it’s simply the fact I have noticed our actions have consequences. Just like that shlep along school boy that wanted to fly fighter jets, if you don’t make the right decisions you don’t get what you want. Sometimes no matter how careful we are life throws us a goolie and all we can do is go along for the ride. My experience has taught me not to get bent out of shape when this happens. Disappointment is always a disappointment but a good attitude will always turn things around. Sure I start of with a grumpy Eeyorean attitude but there really is no choice but to suck it up and get on by making the most of a situation.

Cast your mind back about 4-5 years now and you will remember an uncharacteristically cold winter here in Blighty. Where I live by the sea it rarely freezes but that winter we saw -4. Just 10 miles inland and -12 was common and I know of several folk that experienced much lower temperatures. I think we had all become a little blase about such things, it’s decades since we saw a really hard winter. The nett result was a lot of folk with dead bonsai. Many of the species we cultivate seem fine at minus single figures but get much below that and problems set in with a vengeance. We noticed a lot of deciduous trees, in particular, suffered. The trees would leaf out in spring as normal and then collapse. In fact the trees were growing on batteries, energy stored in their bark and sapwood, but there was no root mass to support the growth. Many folk simply dumped their trees and went home to lick their wounds. This sort of event can happen and the only sensible recourse is to chalk it up to the price of an education. Sadly a few folk were shaken to their bonsai foundations and walked away for good. I lost some trees as we all did, a couple were the price of small cars, I paid the price for my lack of vigilance. However my bonsai skill is now much improved as a result and winter losses are behind me now.

Several of my guys lost trees too. One in particular had a real hit with a stunning large hackberry. These are good to a couple of degrees below freezing but then need help. Without knowing anything was wrong we re-potted the tree is spring, the roots seemed a little dry and ‘flat’ but I put that down to a rough winter. In spring leaves started to show and then dried up. I put the tree in our greenhouse and gave it the best of care but by summer it was obviously toast. We put it in the dead pile, a corner of the nursery, next to the log pile. We like to give everything the best chance and so trees can sit there for a year. However as a result of the bad winter the dead pile was a little larger than it should have been and so we decided to clear everything away. I broke out the chainsaw and Rammon started stripping trees from their pots. We got to the hackberry and eagle eyed Rammon noticed buds all over the tree. All of the beautiful ramification was dead and most of the major branches were also dried up. However parts of the tree were evidently alive because they were simply covered in buds. The tree got a reprieve and was put under the bench in the greenhouse. The following spring the tree started to grow strongly and I re-potted it.

Jump forward about three years and the result can be seen in the first picture. Yesterday I spent a couple of hours on it and you can see the result. As Rammon pointed out to me, nobody else will have one like this. It’s certainly not what it was but in the right light it might be construed as a more interesting bonsai. I will certainly carry on with this trees development just to see where it can go. Sadly it’s former owner seems to have largely disappeared from bonsai. I said recently it’s a mistake to hold too tightly to a ‘plan’ in bonsai. Just enjoy the ride and roll with the punches. 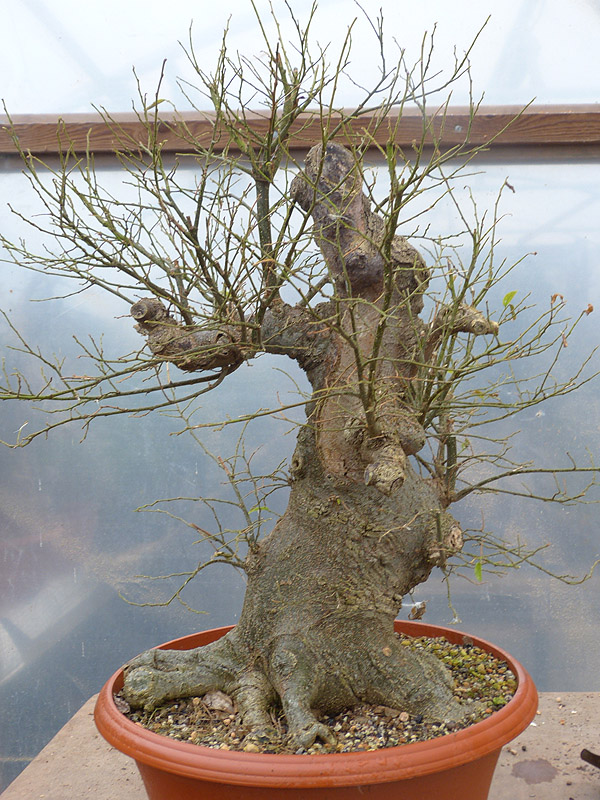 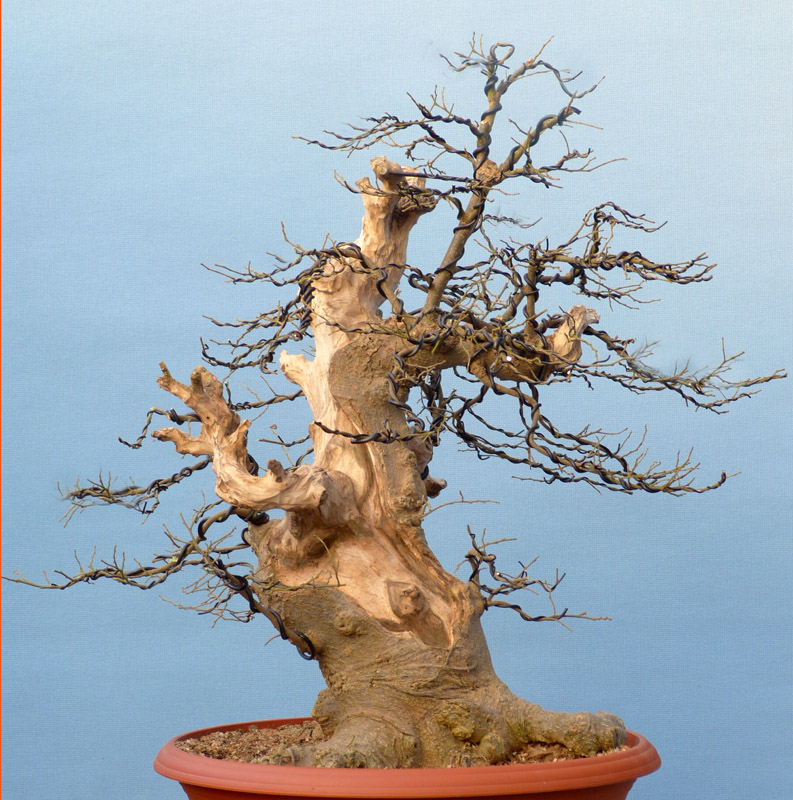