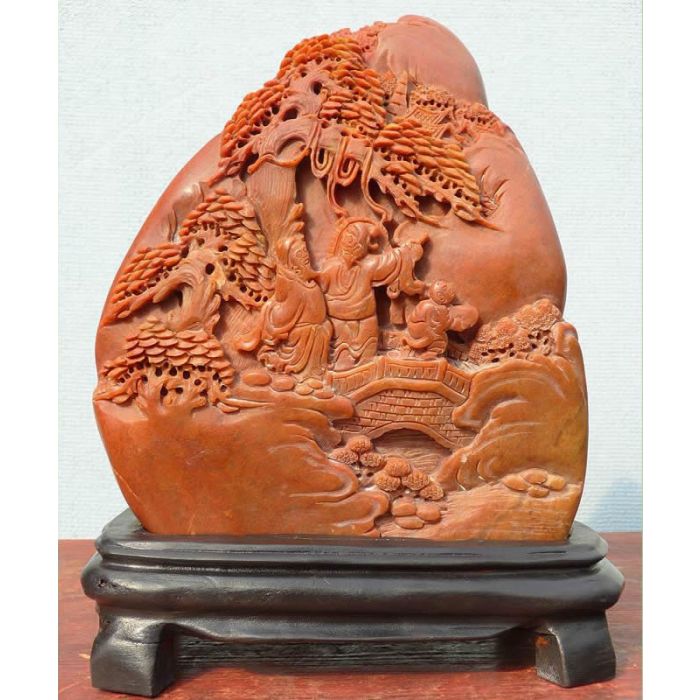 Skip to the beginning of the images gallery
Details
Shoushan Stone Carving. Shoushan stone carving is a Chinese art originating in Fujian Province in Eastern China. The stones used in carving are also known as agalmatolite and are mined in the Shoushan village in northern Fujian. Use of the stone for carving can be traced back as far as the Southern Dynasties (AD420 to 589) and have long been used to produce handicrafts and later on in the Ming Dynasty, seals. With a soft, smooth surface and rich colours, Shoushan stone is an ideal material for carving and is known as "the top grade-coloured stone for carving." It is characterised by exquisite smoothness, softness, and cohesion. Shoushan stone is made up of lava and the minerals around it which are gradually re-congealed into a coloured crystalline ore. Comparing favourably with jade, it far exceeds jade in colour. Shoushan stone is the best and most valuable of all the various coloured stones in China. There are around one hundred kinds of Shoushan stone. The most precious kind, Tianhuang stone, is more valuable than gold and enjoys a reputation as "the king of stones." It is said that 50 grams of Tianhuang stone is equal to 150g of gold. It has been more than 1,500 years since Shoushan stone was first exploited as a precious material and valued for its gorgeous colours, smooth and fluid character and changeable veins. During the Southern Song Dynasty (1127-1279), the stones in Mt. Shoushan had already been largely exploited. The Shoushan carving industry was finally formed after continuous development in the Yuan (1271-1368), Ming (1368-1644) and Qing (1644-1911) dynasties. Even the royal seals of the Qing emperors were made of Shoushan stone. The unique style of Shoushan stone-carving had split into two genres by the Qing Dynasty. One genre specialises in three dimensional carving of figures, landscapes and animals, and the other focuses on Boyi carving that emphasises poetic artistic conception. The various types of Shoushan stone-carving now include 3D, relief carving, openwork carving, hollowed-out carving, Boyi (shallow relief) carving and marquetry carving. The subjects range from human figures, animals and landscapes, to flowers and birds.

Top craftsmen are able to create wonderful images by utilising the natural contours and fine streaks of colours in the stone.