From the Toilet to the Top – A Life Times Journey

Having been involved with bonsai for nearly 20 years now I am beginning to think one lifetime is barely sufficient to produce a great bonsai. However before you throw all your trees up for sale please allow me to illustrate my point with the story of a tree that taught me a great deal.

The story concerns a privet (ligustrum ovalfolium), and began way before I was born…in fact way before my parents were born, in a small seaside holiday resort around the turn of the last century. The tree had made up part of a small hedge that screened a toilet block from view. My first contact with the tree was in spring 1994 just prior to bulldozers clearing the site for re-development. The tree was growing in dry sand and in this circumstance privets tend to grow very slowly. The tree was 85-100 years old at that time.

After crudely collecting I planted the tree in a wooden box and waited impatiently for it to grow. The old stump looked pretty uninspiring and had certainly taken a few knocks with the ugly stick. My initial plan (inspired by the books of Mr Kimura’s work) was to create a great deal of deadwood with just a small amount of foliage. However my imagination outpaced my practical skill and the tree remained untouched…..thankfully.

As is their way, my privet grew very strongly and after two years I re-potted the tree into a terracotta training pot following a very heavy root prune. I also applied a little wire to shape the new straight shoots. At that point I had chosen a front with the trunks sloping to the left. There were some ugly lumps on the other side which I did not know how to deal with so, I thought ‘out of sight, out of mind’.

By 1999 the tree had become a bush with copious growth and long shoots covering the whole tree. In spring 2000 it went into a mica training pot following a smart haircut. By that summer I was quite proud of my efforts. Careful pruning and a little wire conspired to make a reasonable looking bonsai. There were however still problems that needed attention and sensing that the tree was going to become a significant bonsai I decided to seek expert help.. my friends have been telling me I need expert help for years! Later that year I headed off to Kevin Willson’s place.

I sensed that Kevin was not exactly keen on the species but, being a professional, he knuckled down and got to work. Firstly I wired the entire tree. Kevin then turned my carefully crafted front to the back and began to carve the ugly parts of the tree that had caused me so much anguish in the past. By the end of the day it became evident that I would indeed end up with a significant bonsai in time.

Over the next few years my experience and skill improved and as a result my trees began to do the same. The privet grew like wild fire every year, branches thickened and callous tissue formed very nicely. Every year enabled me to prune several times and so the trees ramification built up rapidly. During this time the tree went through several ill-fated matches with various pots.

To the best of my knowledge this was the first privet of its kind exhibited at the Ginkgo exhibition. The tree behaved itself very well and was displayed at the show in a tokonoma, again much to my surprise! Over the weekend I began to wonder what course of action I should take in continuing the trees progress. This turned out to be a mute point because, following a little heart searching on my part the tree left to live in Italy where it became the ward of my good friend Mauro Stemberger. The following spring he displayed the privet at the famous U.B.I where it received an award of merit.

So going back to my original point, the story of this nice little tree spans almost 100 years. The resulting bonsai is the sum total of a great many influences both natural and human. It narrowly avoided destruction at the hand of developers. It then had to put up with my inept fumblings before finally showing it’s true beauty. Over the years I learned a great deal from this tree.

I believe it to be important when crafting bonsai that we be sympathetic. Taking careful note of the special character of our material and incorporating it’s unique features into our work. It is also important to consider the opinions of others and remain open minded about our plans and the direction we hope to take. Working quietly with patience and skill over time will bring great rewards. I now believe that bonsai are our masters and that we are just gardeners, slaves to our desire to create beautiful things. 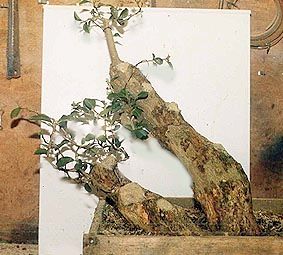 A good friend had inherited a piece of land and in 1994 just prior to the bulldozers arriving I had a chance to remove any trees I wanted. The remains of an 100 year old hedge yielded this privet stump (Ligustrum ovalfolium). This picture shows it at the end of it’s first year in a box. 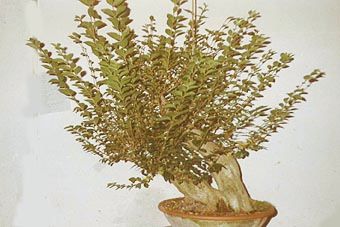 Here we see the tree in summer 1999. The intervening years saw the tree repotted once and cut back twice yearly in order to create twigginess for the future styling. Privets produce copious amounts of fine root right out from the trunk. By this time all heavy roots beneath soil level have been removed. 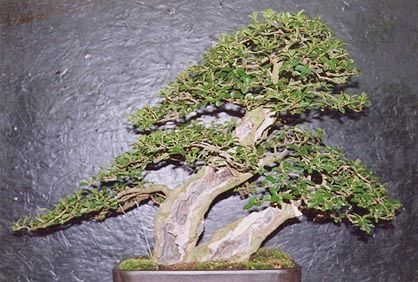 This is how the tree looked after initial styling. Privets can be easily shaped using wire but when bending work slowly and flex the branches gently prior to positioning. The tree has been turned around and carving was used to remove some unsightly lumps on the larger trunk. The tree is wearing a mica pot. Because of its rampant root growth I repot this tree every year now. 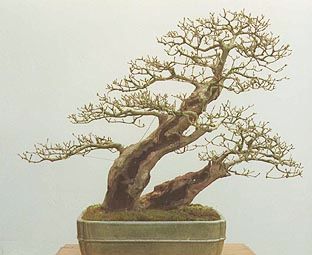 The picture, taken in winter 2002 shows the tree reaching a fair level of maturity, in early summer it began flowering and the leaves are now much smaller. I have noticed that privets planted in stoneware pots have a tendency to lose their leaves following freezing weather which I can only assume is an effect of cold on the roots as privets planted in boxes or mica pots seem to keep their leaves all year. Whatever…. The tree now shows marked seasonal change which is nice. 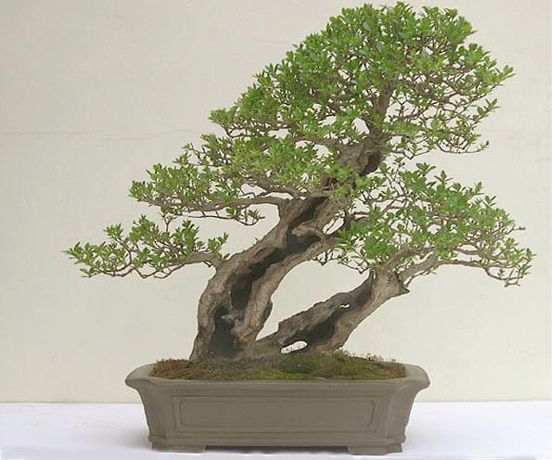 Spring 2004 and coming into leaf. This is how the tree appeared at the Noelanders Trophy V in January. I have finally settled on this classic style grey pot. Some refinement of the deadwood is planned as well as some heavy pruning in mid-summer. At 100-115 years old the tree is looking pretty fit! 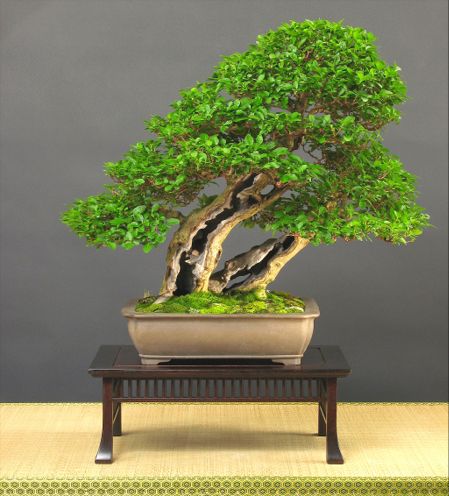 The tree as displayed by it’s new owner at UBI 2006 in Italy,
where it received an award of merit.
“with permit of Unione Bonsaisti Italiani”