By and large I was a sullen little kid, never happier than in my own company, doing my own thing. I was hopeless at being told what to do and my mum used to call me ‘little Tommy opposite‘. It didn’t seem to matter what my parents had to say I would want to do the opposite. Chips for tea? No, I want pie. Lets go to the beach! No I want to stay home. Let’s stay home and watch TV. No I want to go to the beach. Don’t hit your sister!……..You get the idea.

Back in the late 70’s everyone was losing their minds over punk rock and later new wave synthpop which just made me retch. Me? I was a hold out for the heavy metal bands of the sixties and very early seventies: Status Quo, Deep Purple, AC/DC, Judas Priest and the like. The closest I got to being up to date was Iron Maiden who I came across when, aged 12 my mate Woody and I took off school, jumped on a bus, all alone, and went to see the band up the coast at a little hellhole in the countryside. It’s safe to say I have never been a slave to fashion.

I have written here before about Warren Buffet’s theory of, effectively, swimming against the tide. The fact that almost everyone believes a certain thing to be ‘true’ does not make it so. Life is governed by some immutable laws; jump out of an upstairs window and the result will be the same today as it was a thousand years ago. Sadly today we are governed by a great many fickle laws but, that serves us right for putting lunatic criminals in charge of our national destiny.

As humans we have the choice to live our lives by either conviction or preference. Loosely we might say we order our lives according to what is ‘right’ (those immutable laws) or what is ‘comfortable’ or convenient. This opens up a complex can of worms we are best to save for another day. Suffice to say that very often doing what is right may not be easy, convenient or popular. Bonsai is a bit like that…………..

Remember being at school? Learning was hard right? It certainly was for ‘little Tommy opposite’ here. It’s not that I was stupid, I have made a fair success of everything I have attempted in my life. However when it came to school learning nobody took the time to really lay out what was in it for me so I played the fool and at age 14 1/2 I took it upon myself to leave. I figured out how to turn up, get registered and then bunk off without being noticed. I did hang around for woodwork but that was about all.

Having said that I have had a wonderful time in my life learning. Applying myself and learning new skills has been a fantastic journey in so many different disciplines. For example I taught myself to operate a litho printing press which led me into the printing industry for more than twenty years. I didn’t need an apprenticeship, NVQ, SVQ, City & Guilds or any other silliness. I turned up with a folder of the work I had produced and got every single job I applied for. Put simply I could do the work and was motivated.

My bonsai journey has been much the same. Hard work and dedication made up for a lack of talent. My penchant for not listening to other folk and, as we say in Norfolk, ploughing me own furra’ helped a lot. I learned at an early age how to figure stuff out on my own and back when I started trying to grow little trees I was, once again on my own.

Those were blissful times, I had no internet, no TV and no telephone. The only source of bonsai information was books from the library and even in my embryonic state I could tell a lot of those were written by cabbage kickers. My go to source for all things horticultural was The Readers Digest Encyclopaedia of Garden Plants and Flowers. That wonderful book, which I still have right here, taught me all I needed to know about growing plants. The bonsai bit was separate and the easy element in the equation to understand and much like my printing escapades it only took me a couple of years to get the basics down pat.

Back in the day when I did actually go to school I always sat, sullen in the back of the class or failing that I was causing trouble being a smart-arse. So, here’s a thing that never happened, even after I attended the same class several times. They NEVER asked to stand up and teach the lesson. In fact I was never even asked for my opinion or thoughts. There were some subjects in which I excelled: English, woodwork, general science and darts but even there nobody asked me for my two penn’orth.

The problem we have today is that the whole of human history and ingenuity is right there at our finger tips. Never has it been so easy to learn wonderful new things but on the other hand never has it been so easy to choke to death on total bullshit. Much like my spotty young self sitting at the back of the maths class I might have thought I had it taped and could teach the class myself but come exam time it turned out I was a feckless clot and that’s all I have to say about that.

I got onto that because I realised recently, unlike many folk in bonsai I actually prefer the end of the season to the beginning. There is nothing better than the first warm sun of spring on your face but in a bonsai context all that new coloured growth and larch shaving brushes stuff leaves me cold. I also have little interest in autumn colour nice as it is. The really exciting element of developing deciduous trees as bonsai is when we can finally get rid of the pesky leaves and reveal the structure beneath, it’s the first chance to see the results of our summers labours.

Deciduous bonsai are ONLY really improved over summer. The old ideas about growing out 5-7 leaves and then pruning back to two is cobblers. There is so much both clever and intuitive technique in building something like a Japanese maple, especially in a northern climate,  that it’s not surprising they are so rare and valuable. Most folk are content to look at an upturned mop (of leaves) on a stick because doing much more is really hard and that explains why there are so few very good deciduous trees in British bonsai.

I do not need all my digits to count the number of UK bonsai growers that can do this work. Even despite the prevalence of broadleaf deciduous trees grown in this country, top quality examples with properly constructed branch structure and dense ramification are as scarce as the proverbial rocking horse teeth. A bonsai needs to be an authentic, if slightly stylised and tidied up example of a venerable old tree. Leaves can hide a multitude of sins and usually do.

I am sure that part of the problem is the lack of mature quality examples of good work. Most of those we have come from Japan simply because they have been using quality technique for decades where we have been fumbling around in the dark for little more than twenty years. Let me put this considered opinion out there. Assuming you begin creating a deciduous bonsai from the very best quality collected material it will still take at least ten years to get on the first rung. To build a top quality tree will take the fastidious application of complicated technique for twenty of more years. And that assumes one has the vision and creativity to know what will look good after that time and effort has passed.

In Britain Japanese trees are widely dissed as ‘cookie cutter bonsai’. To be fair cheap low end commercial trees are just that but once the price tag gets over a few hundred that’s not the case. However even at that level I have lost count of how often I have been told a fella has no interest in ‘finished bonsai’. That phrase cracks me up, there is no greater display of  ignorance that uttering those two words. The only time a bonsai tree is finished is when it’s owner runs out of skill. Unless of course that guy had no skill in the first place which pretty much guarantees a dead tree early on in the game.

Go outside when it’s quiet and spend some quality time with your trees. There should be a plan for every single one, ideally stretching into years of work. If you find a tree that you think is finished or you are satisfied with it’s time to go back to school and lean something new. Push hard, never be satisfied and keep on learning. If you can’t find the ‘man who can‘ help you out then develop your own techniques and disciplines.

A mature bonsai tree takes infinitely more work to develop and maintain that raw material. Don’t be afraid you will run out of work because both structural and refinement work is very time consuming and creative in nature.

Some folk out there will remember Danny Use’s Ginkgo Awards. Danny pretty much built the foundation upon which all European bonsai has been built ever since. I missed the inaugural 1997 show but under orders from Kevin Willson I got a passport and attended the 1999 show. I was crestfallen at how poor my efforts measured up to the trees on show and came away determined to do better and one day have one of my trees at a future show. To my utter amazement I had a yew tree that I dragged out of the woods accepted for display at the 2001 show. I was like a dog with two dicks, getting accepted was probably the highlight of my bonsai journey. I was thrilled, proud and terrified all at once.

I remember after the show as I wheeled my tree out the door Danny stood right there and as I passed he leaned in and said ” Nice tree, now go home and make it better.” That’s it, a simple phrase that encapsulates everything i have been doing for the last thirty years, the reason I chose Kaizen as the name of our business and the basis upon which I have set everything I have done.

Fittingly the last word here goes to Danny Use.  “You do not make a tree, you build up a tree”. 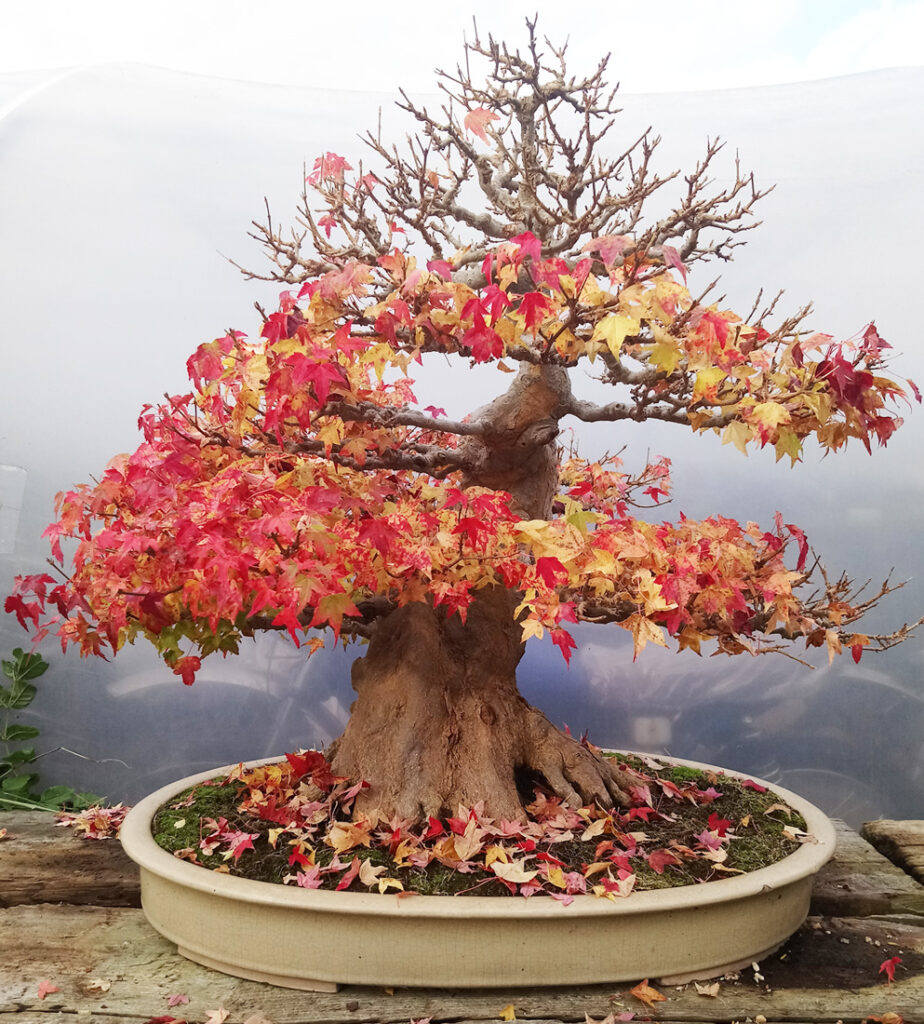 Trident imported from Japan 2019. October 2021 and finally I get to unwrap my summers work. 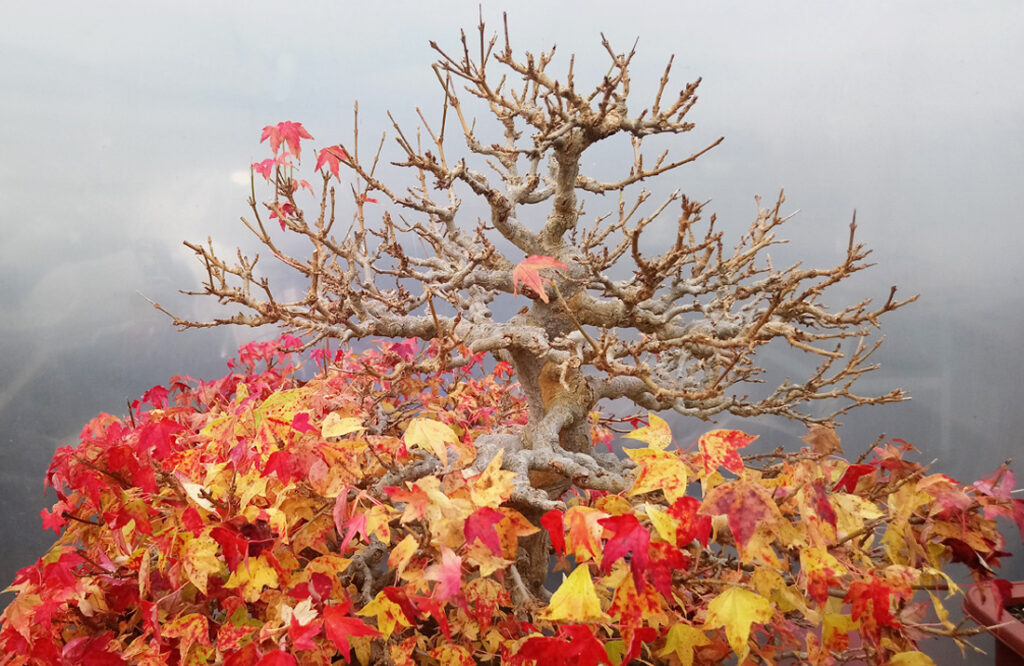 I can’t stop pulling leaves off. It’s been a good summer. 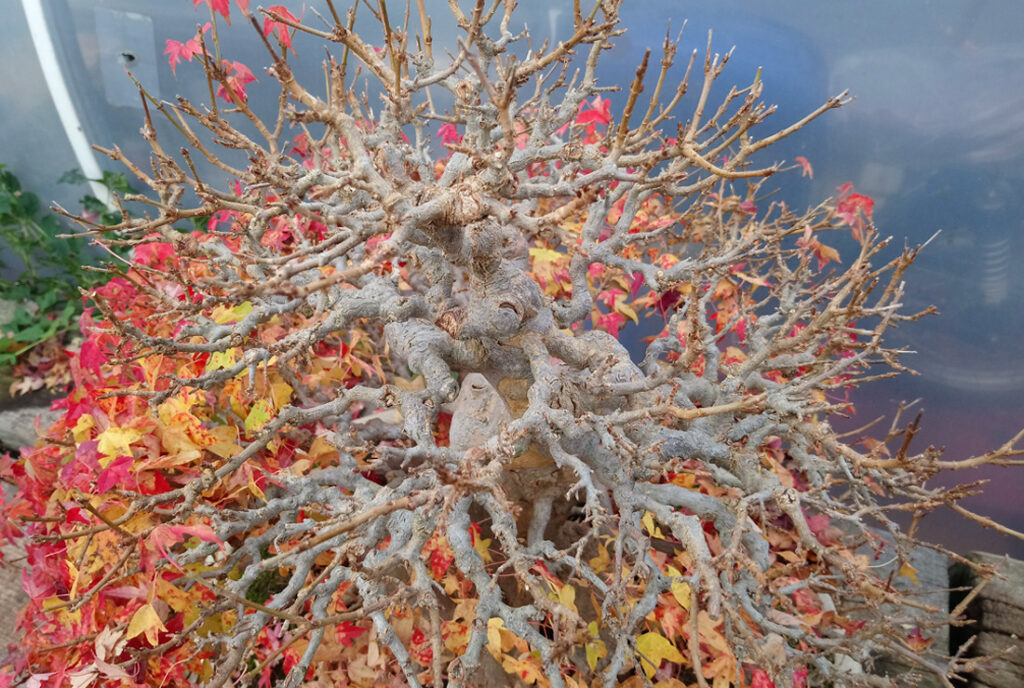 When this arrived it took a whole day to clean up the structure, get rid of knuckles, threes, pruning scars and unnecessary branches. 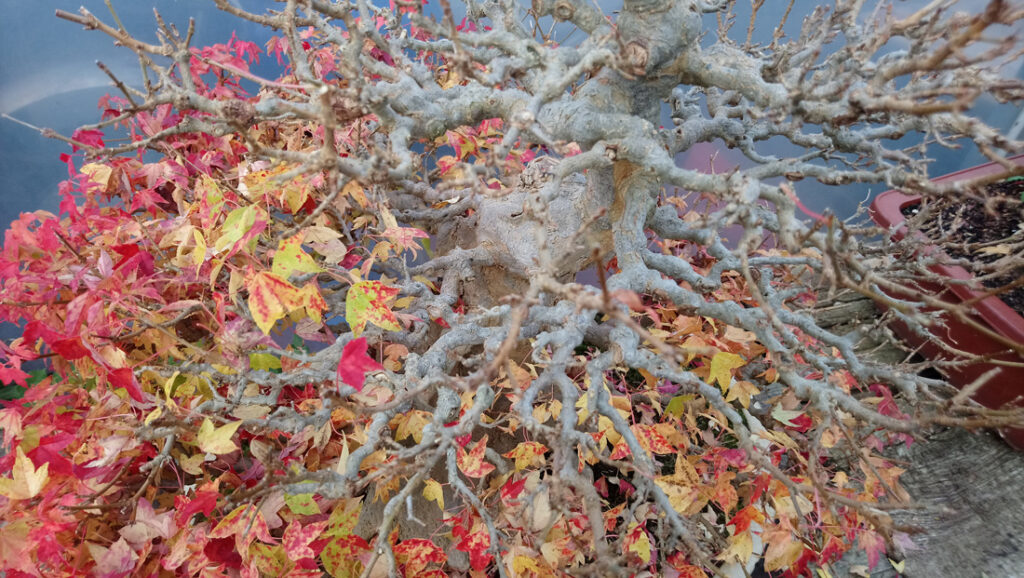 Now at least the structure is clean, pruning scars have mostly closed and the taper is mostly good. Secondary branching is mostly acceptable tertiary branching has improved this year but there is a very LONG way to go yet but for a jumping off point i’m happy.