Life Can Hit Us All Pretty Hard Sometimes

Bonsai is not easy! For many just keeping a little tree alive seems to be impossibly hard. It might be because they are over-complicating things, who am I to say. I am of an age where I likely have a longer past than future. I have been involved in bonsai for more years than not, thirty odd as I recall.

There are two very important things you will need in order to succeed in bonsai. Patience being the primary one. Trees move at a pace inconsistent with the ‘modern’ world. The other is perspective. I remember telling somebody that he needed to prune new shoots back to a couple of leaves. His reply? “What’s a shoot?” Being new to the keeping of bonsai trees the poor lad had no idea what that meant.

Having more than thirty seasons under my belt gives one a great perspective. I know what’s going to happen, all things being equal. I know how what I do today will affect my plants in the future and largely how they will respond and develop. Before I had that all I could see was what was in front of me. As I worked trees I found it all very disappointing. No matter how hard I tried, even today, newly worked trees leave me cold.

For sure, over the years I did a few clever things that folk seem to like. However for me the real magic comes as my clumsy fumblings disappear. The magic of bonsai comes from the trees response to our work. At best we can point a tree in a certain direction and hope it goes with us. Early in our journey this is more likely to end in failure than not but with time, practice and perspective it’s possible our empathy and understanding will result in better outcomes.

Personally I have always preferred to work with a tree, giving it the time and space to become beautiful. I find that better than foisting my ideas upon my subject and brutally hammering it into submission. This may well take longer but bonsai is NOT something for folk who are in a hurry. Years in the saddle have taught me to care less about what other folk might think, bonsai is not about making US look good it’s about making little trees look good and in that respect playing the ‘long game’ is the only option.

I have been very lucky (or was it hard work) to become the steward of some very beautiful old trees, some are bonsai, some will be bonsai but they do all have an inherent magic of their own. As a rule the harder the life of a collected tree the greater the magic it portrays. It’s all about triumph over adversity, it’s inspiring. Folk in bonsai tend to get very excited about deadwood but the focus should always be on the live bit. Bonsai and hope are all about the future and making the best of what we have. Life can hit us all pretty hard sometimes and those hits can leave scars. There’s not much we can do about that but we do have control over what we do after. Often those that took the greatest hits in life go on the do the most inspiring things.

On occasions it almost seems like getting a slap down was the best thing that could have happened. I have several examples of that in my own life. In the moment it seems rough but in time positives emerge, perhaps not what we would like or would have planned but, as they say we have to play the cards we are dealt.

So, recently I had to hitch up my sense of perspective when faced with this particularly uninspiring field elm. I bought a whole batch of these a couple of years ago. I would never have chosen this one but when buying large amounts of stock I have to take the rough with the smooth.

It looks a lot like a sledgehammer with a busted handle. A strange inverted T shape with ninety degree angles. Add to that all the best branch structure emerges from one side. The first branch on the left has a poor angle with the ones above it all emerging from a single knuckle. The upright trunk has absolutely no taper but thank fully what branching there is is reasonably well structured. Obviously there is a big cut in the top and another below the little stump on the left of the initial part of the trunk.

It took me a while but eventually I figured out it was time for one of those hard hit’s if this was ever going to be worth taking forward. I would like to think I saved this from being made into a mallet. 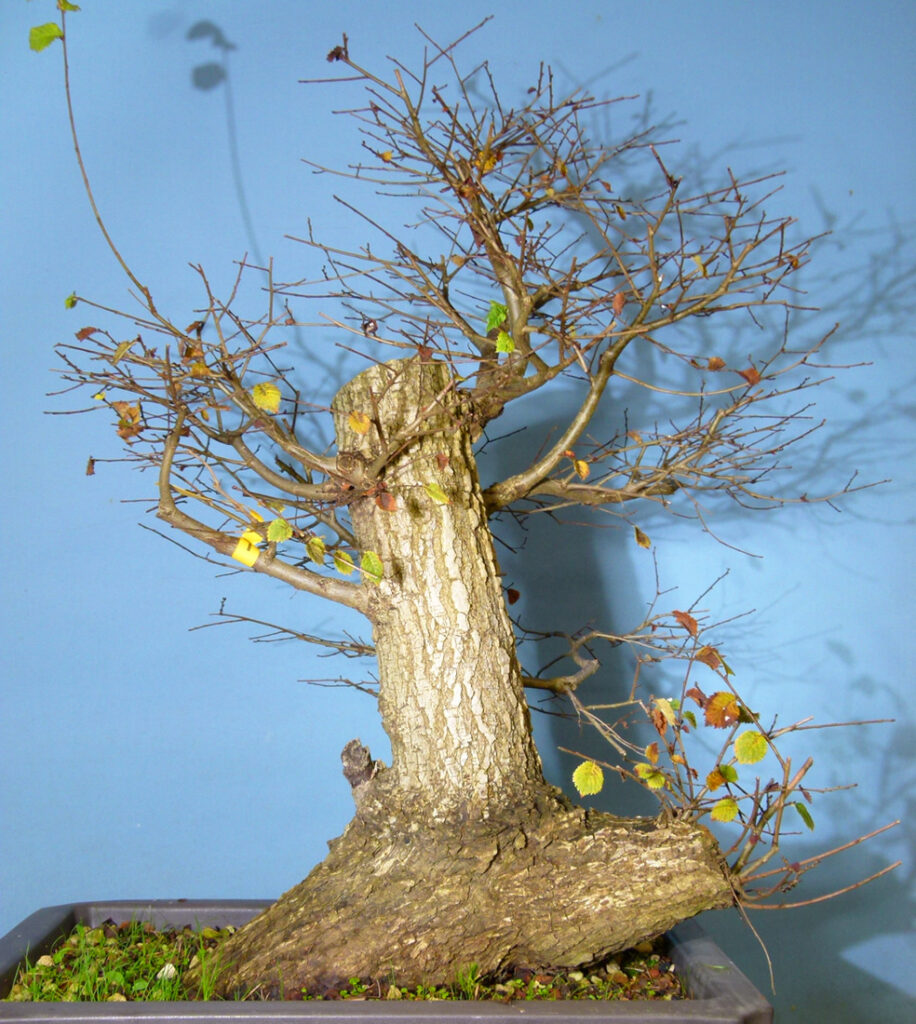 Life Can Hit Us All Pretty Hard Sometimes – Field elm bonsai material. What to do? 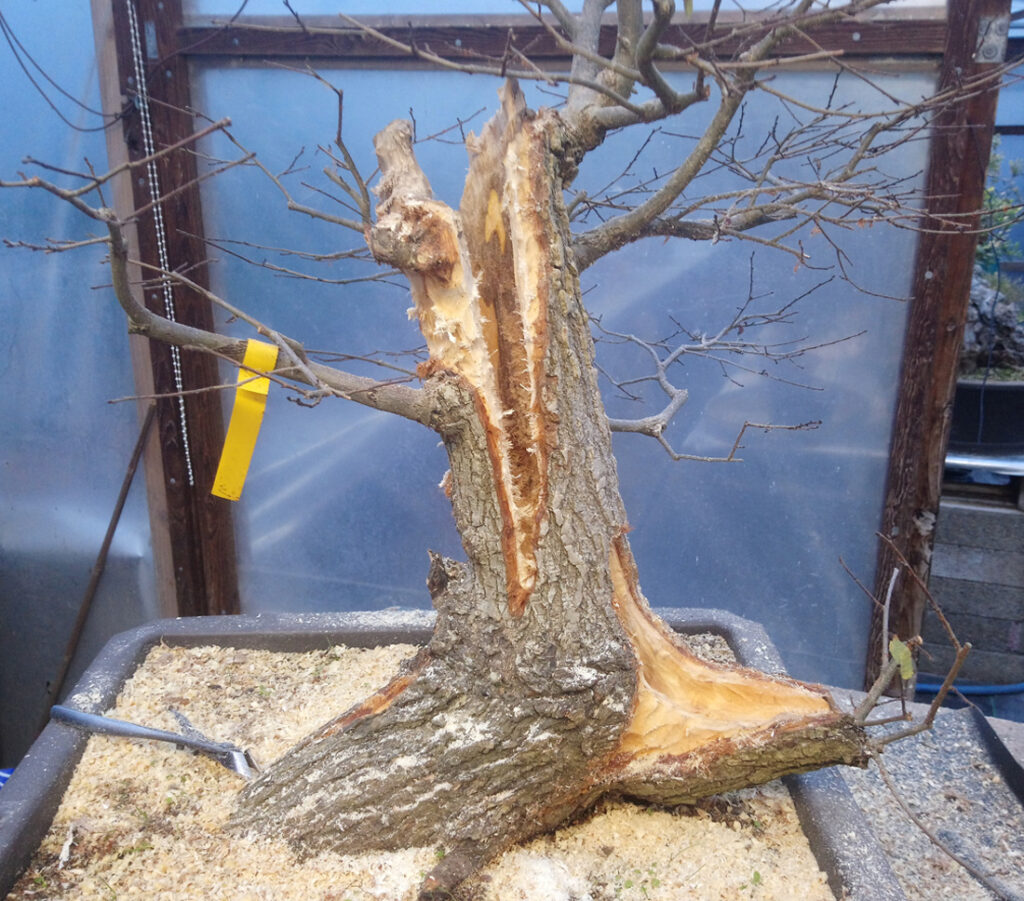 Life Can Hit Us All Pretty Hard Sometimes – It gets worse before it gets better. 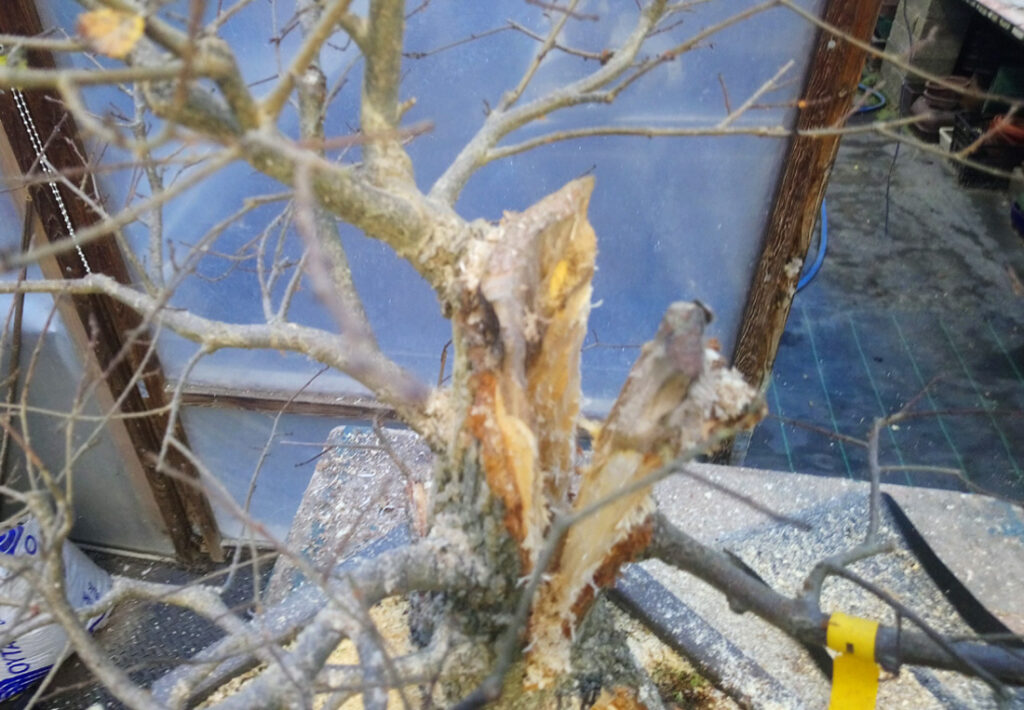 Trust me there is a plan…. 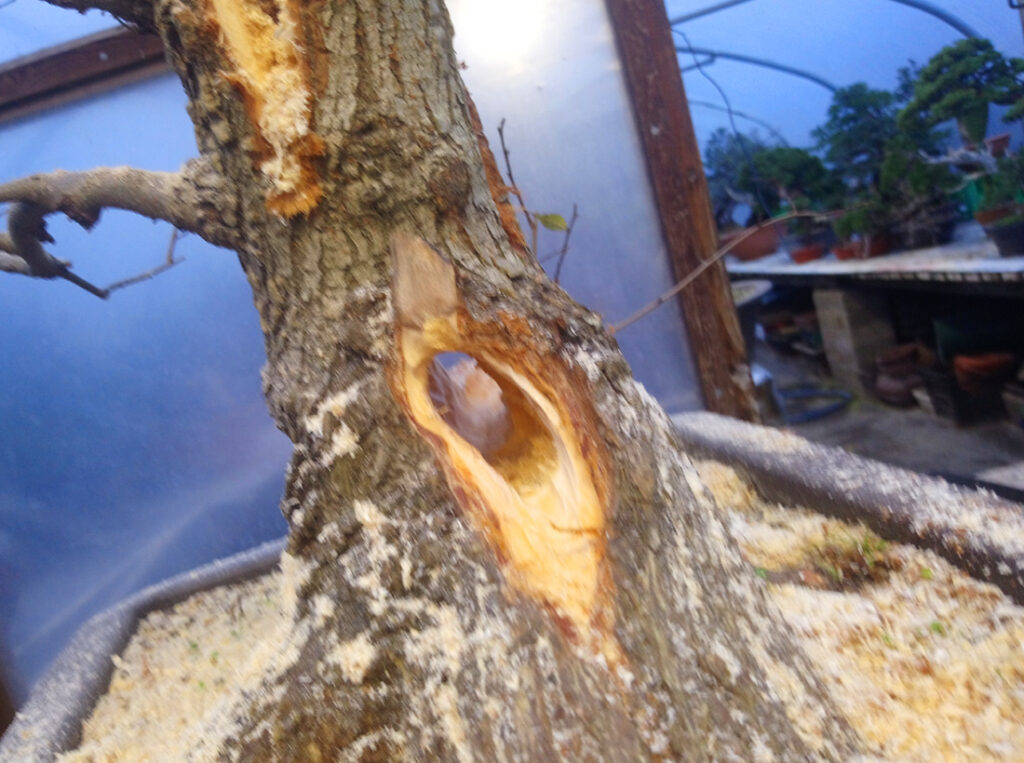 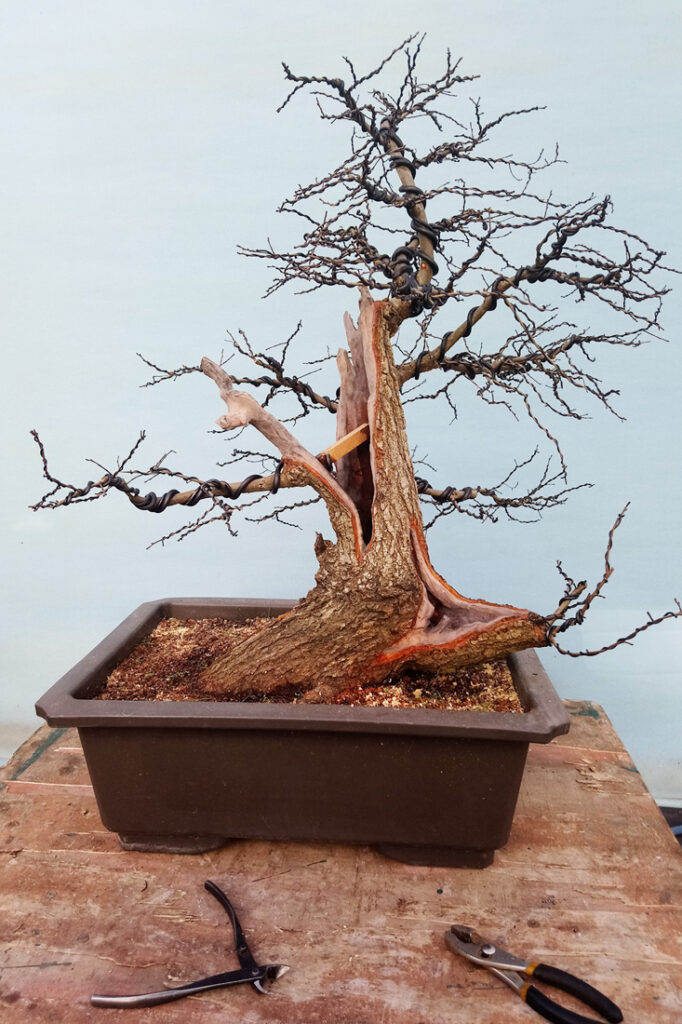 That’s a lot of wire. 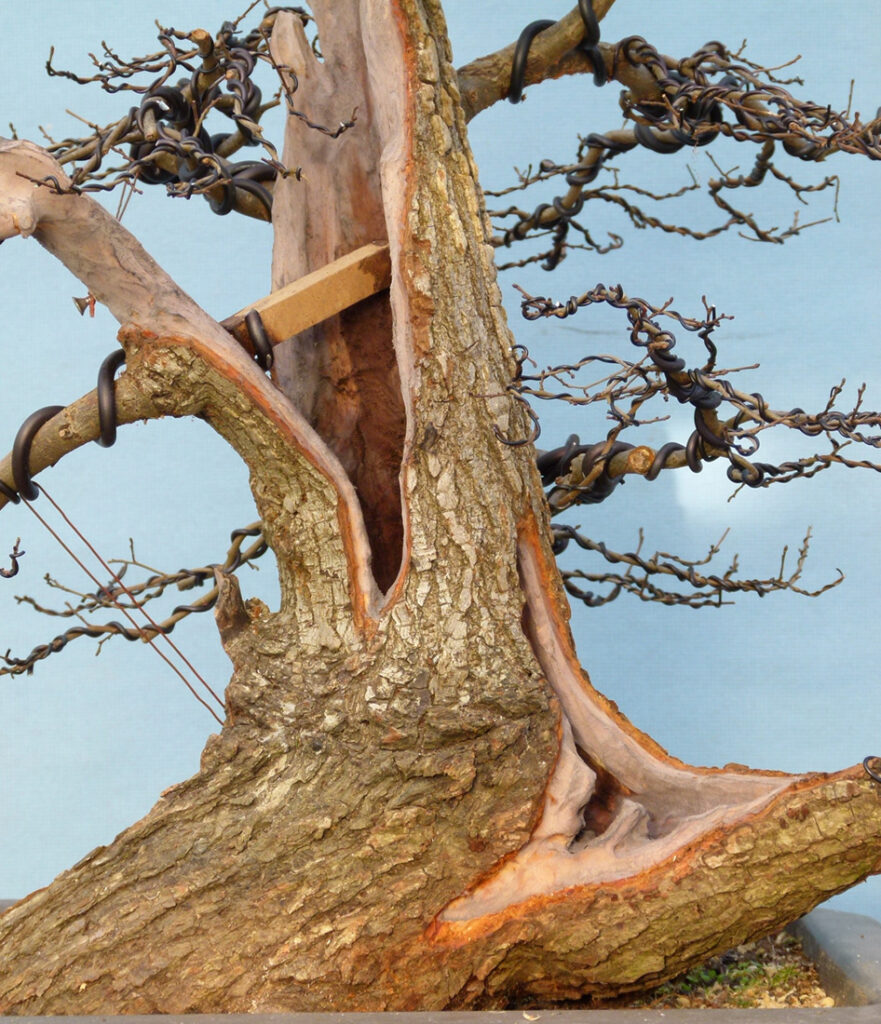 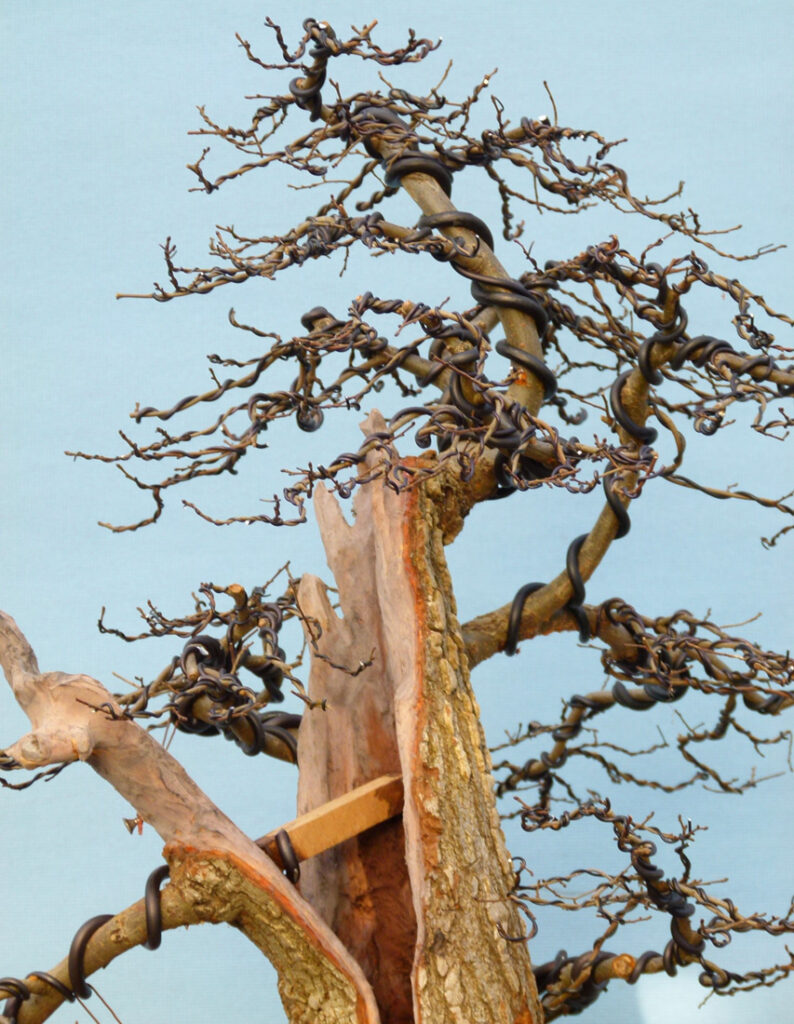 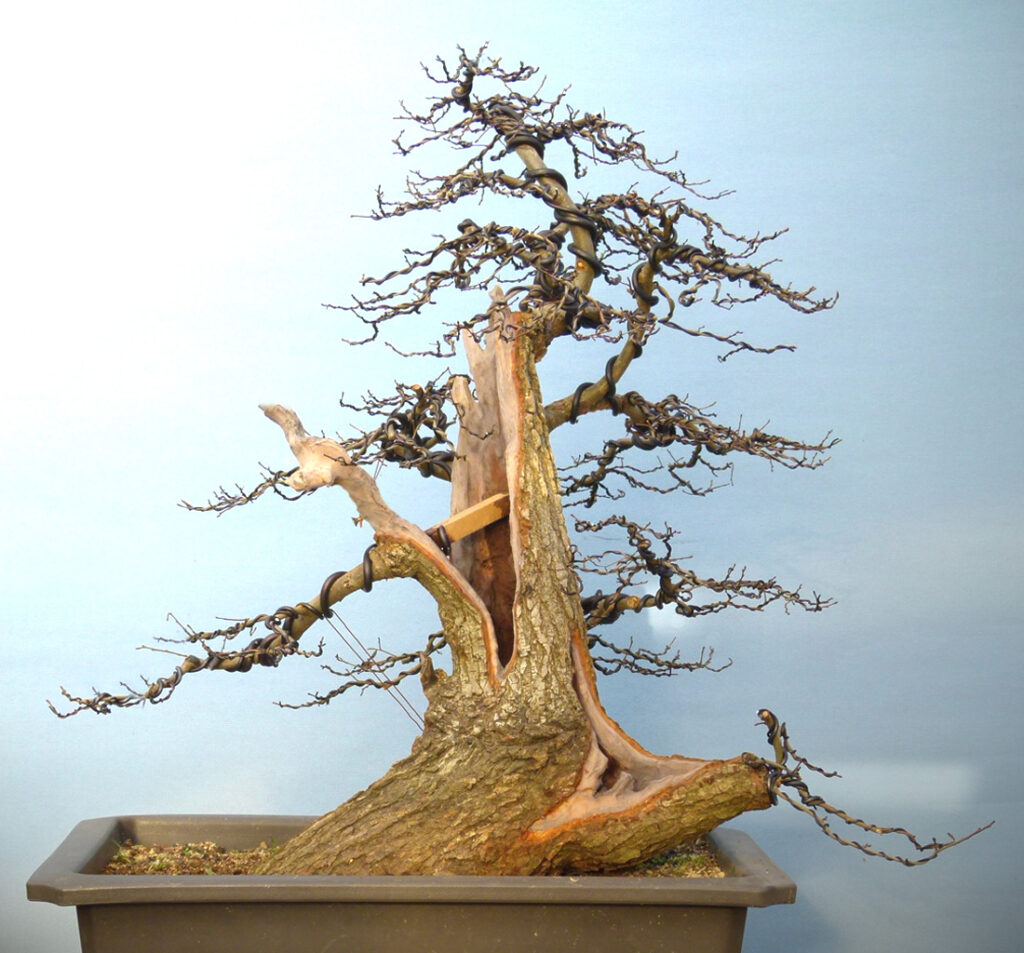 In five years this will be quite something…..hopefully.