Starting out in bonsai is a tough thing to do. It’s easy to get it wrong, be misguided, be deceived or bamboozled by the ignorance of other egotistical self proclaimed ‘experts’. The fact that someone has a large following does not guarantee they know what they are doing. My own mentor introduced me to the concept of smoke and mirrors. Trust me, there are very few genuine ‘teachers’ out there. There are even fewer who really know what they are doing. The big problem is that as a fresh faced newbie full of excitement and enthusiasm we simply cannot tell the difference between an egotistical dumbass on a popularity trip and the bonsai master that would delight in our achieving more than they ever did. 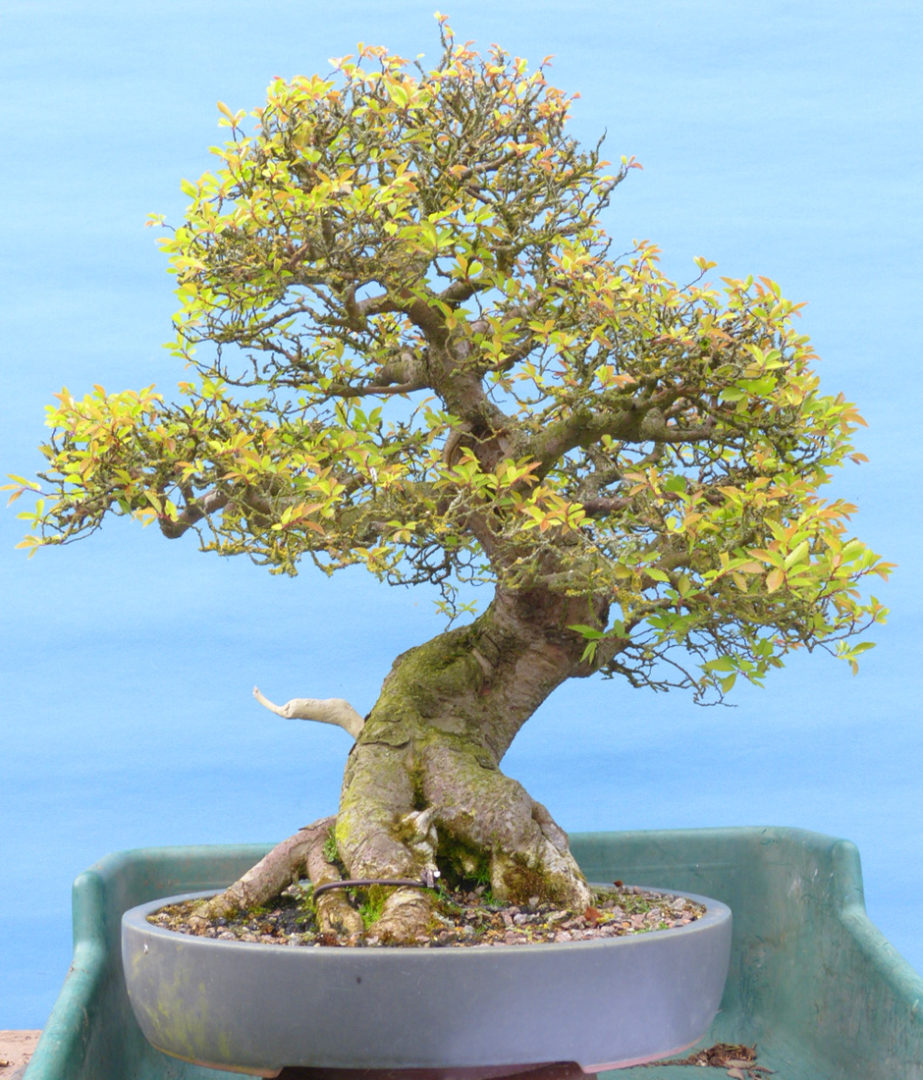 This old and poorly Chinese elm finally returned to us after over 10 years of travelling.

How things change in bonsai, this big Chinese elm, the subject of this diatribe goes back with me for a lot of years. About fifteen years ago it was possible to buy these beautiful craggy old well ramified trees for peanuts. A lot we had were simply stunning and the supply was so plentiful we pushed them out the door like they had fleas. I sold a totally hollow elm that took three men to lift and had been in a bonsai pot for fifty years for well under a monkey. Today the tree would fetch in excess of £7500. This particular elm was sold out of the garden for just over a hundred fine British pounds. It’s owner held onto it for around ten years and it even spent some time in Greece / Cyprus or some such place. On returning to the UK and strapped for cash it was offered to me and I bought it back for £400 and what a sorry state it was in. Not re-potted for years and leaves just a few millimetres in length and no new growth at all and lots of die back.
Because a tree like this is typically very weak there is a limited number of options to turn it around. Conventional re-potting would have killed the tree that literally sat on a knife edge. Also the root system was so compacted that nothing short of a sawzall would have dealt with it. However as I said before a simple solution is normally the best. I filled my favourite tall pot with garden soil, a sandy loam, nothing special. Fill the pot sufficiently that the tree, less it’s pot, can be placed on the soil leaving about an inch or two of headspace. Finally pack the soil around the existing rootball and cover with about a half inch. Place in full sun, fill the headspace with water to thoroughly soak. This can be done at any time of year. My good garden soil was populated with plenty of worms and those are important. 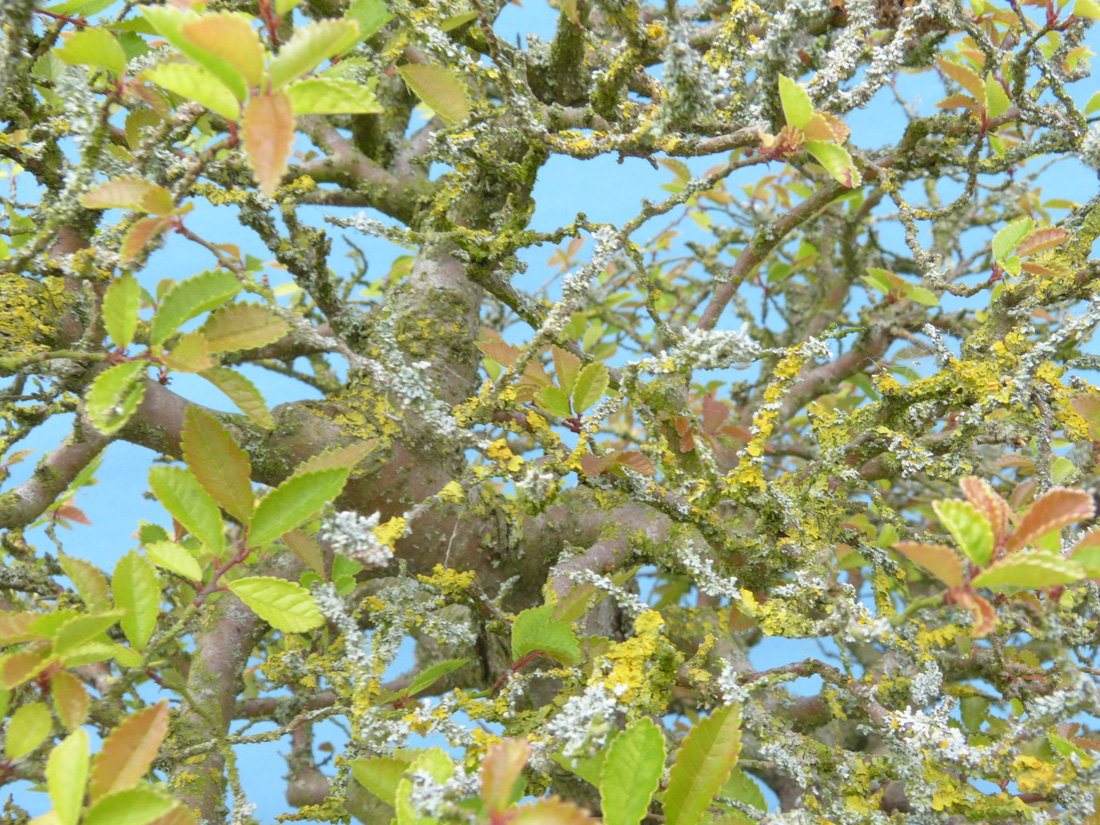 Very poorly weak growth with a lot of die back. 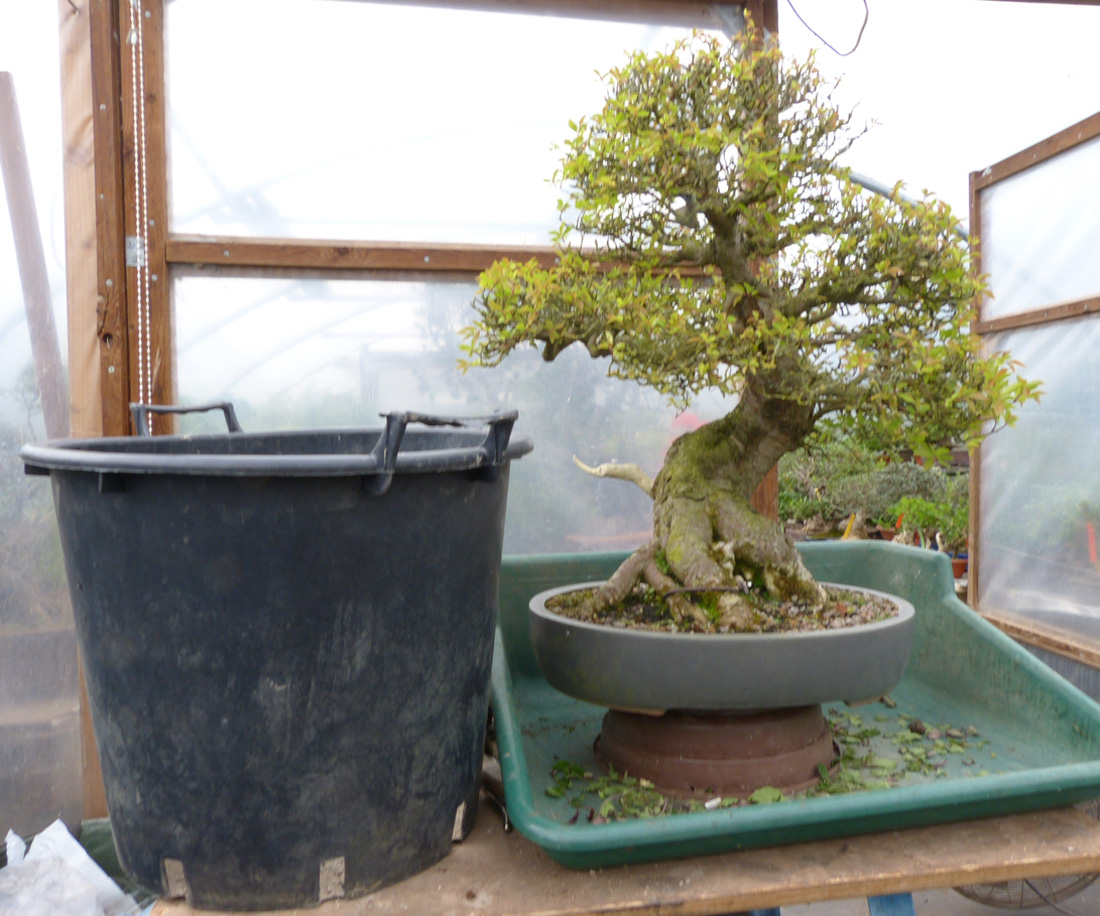 The MAGIC pot we are going to use to transform the fortunes of this poorly old bonsai tree. 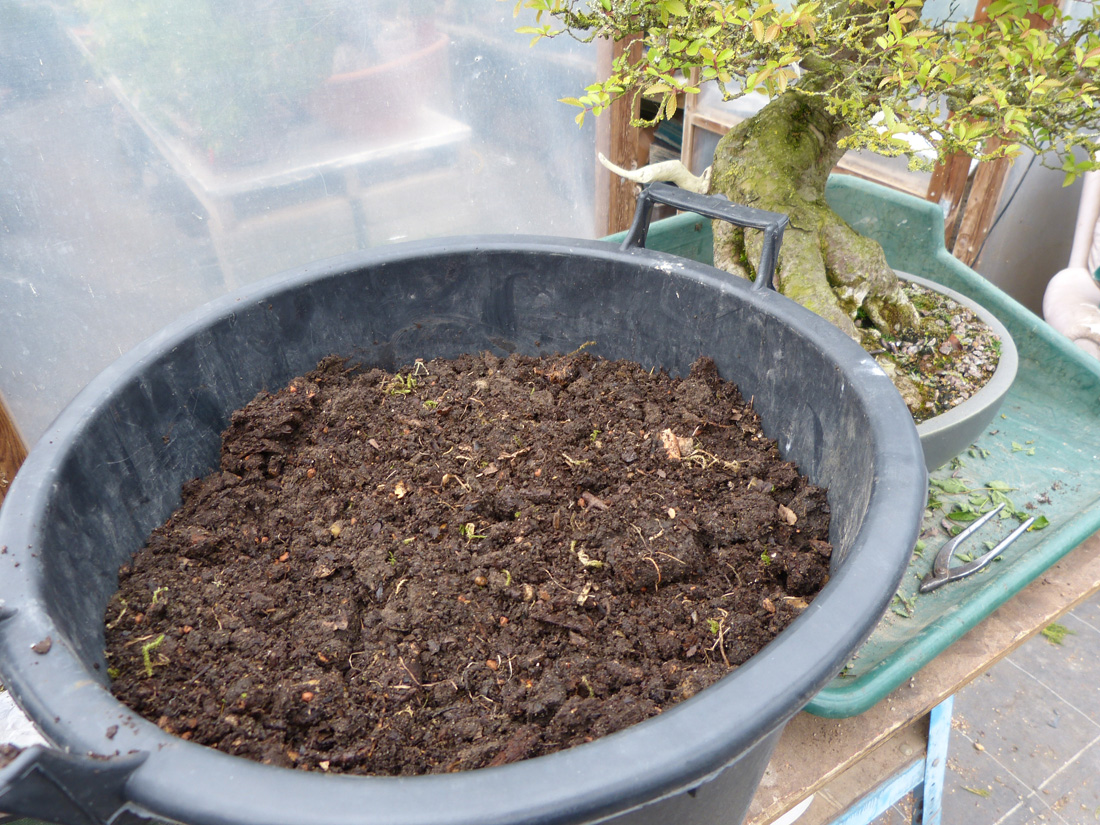 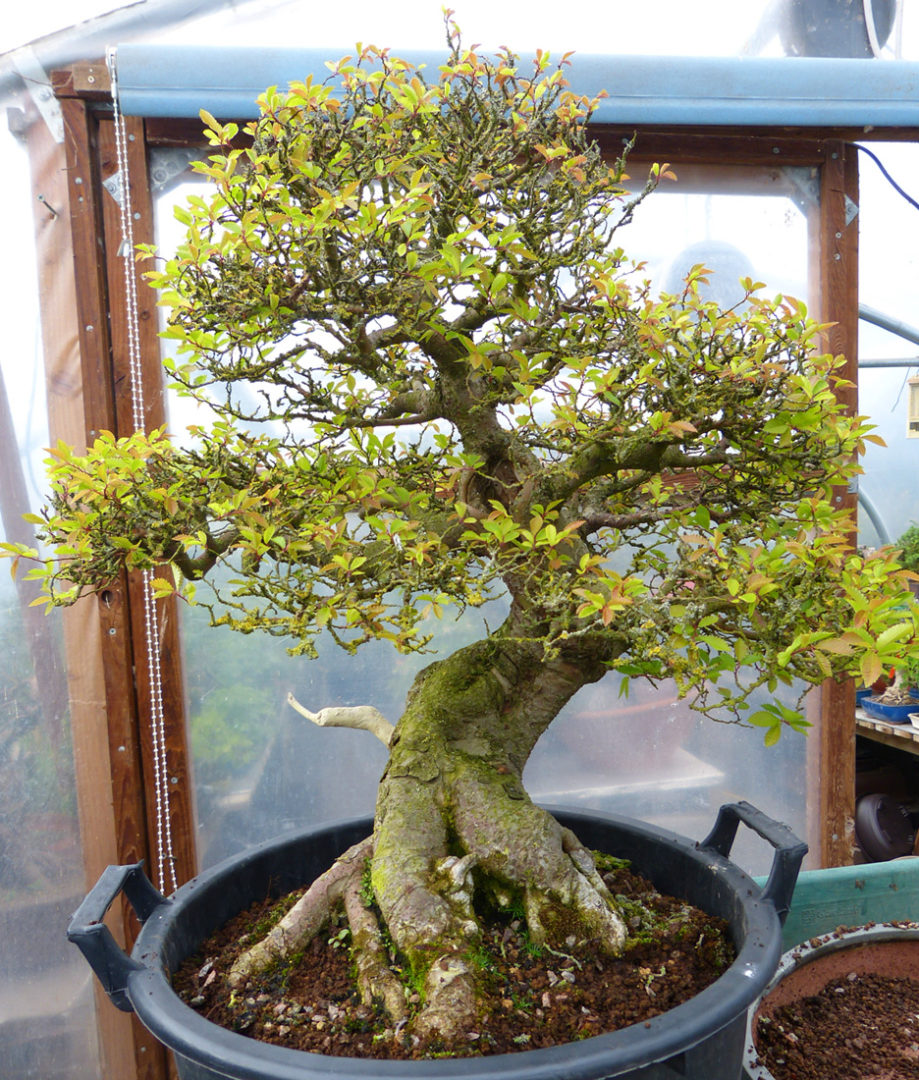 Simply lift out of it’s pot and plop it down in the new pot and cover the root mass with soil. 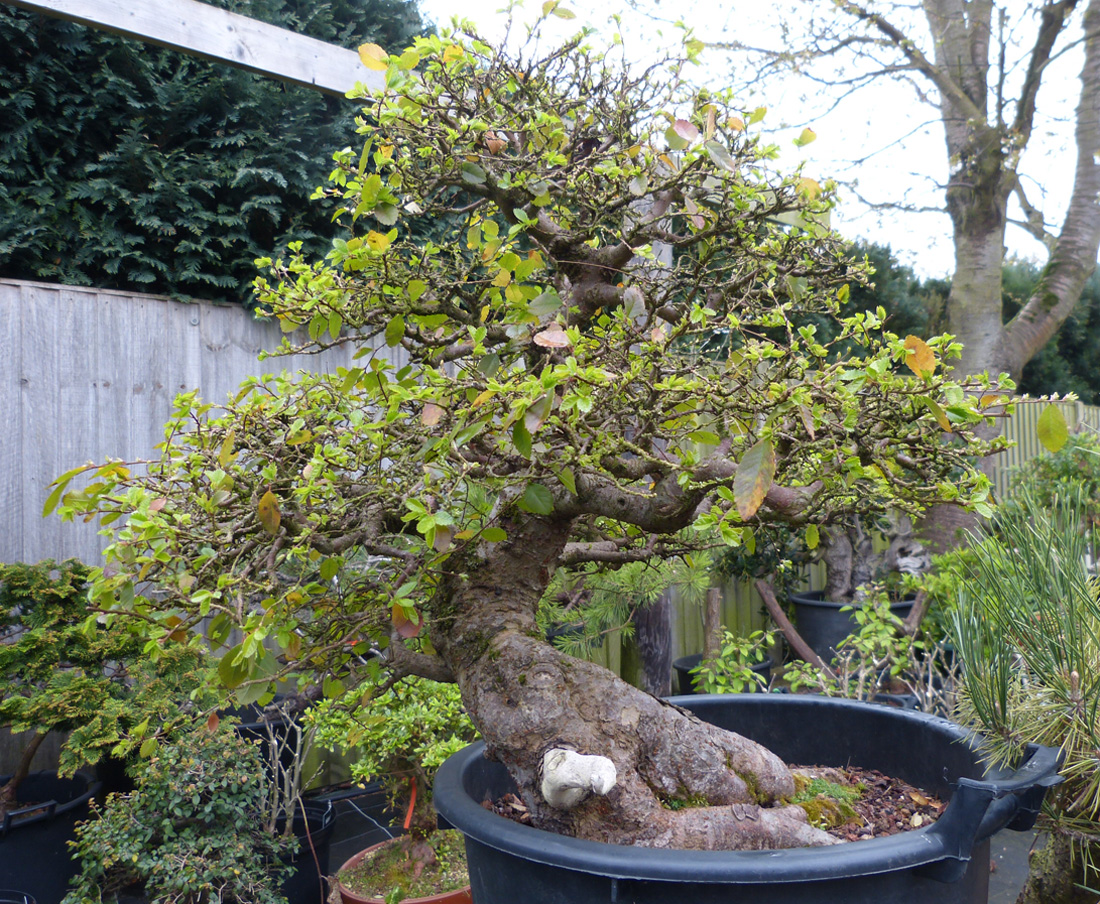 Two weeks later, the last of winter leaf is falling away and new growth is starting.

After completing the above all that is required is a little water every few days. Within two months I had about 4” of growth all over, more than the tree had been able to make in several proceeding years combined. I added a light application of Green Dream fertiliser and let alone. By seasons end I had about 9-12” of growth which was left untouched and the tree stayed in the same exposed position all winter. The following year I was able to make an application of Green Dream early in the spring as new growth commenced and as normal throughout the season. By the end of that summer I had about 12″ to 24″ of growth all over and, for a Chinese elm, massive leaves.
The following spring as the buds began to open I gave the tree a hard prune right back into secondary and tertiary branching. Setting up a nice branch structure was easy on an old tree like this and largely involved removing weak thin growth and everything growing down or inwards. After that the tree went back into it’s exposed position outside and within a few days buds were exploding from everywhere. That summer I let the growth extend untouched as normal. 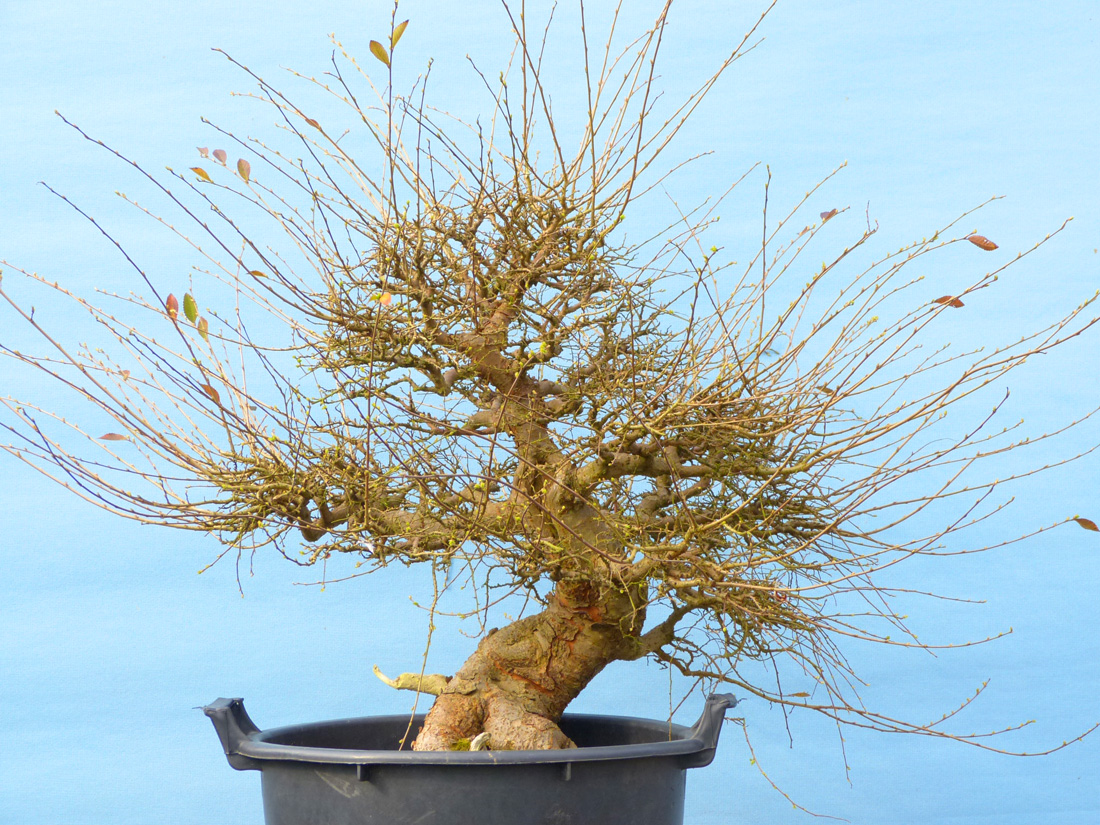 Spring, buds opening and time for a prune back into old wood. 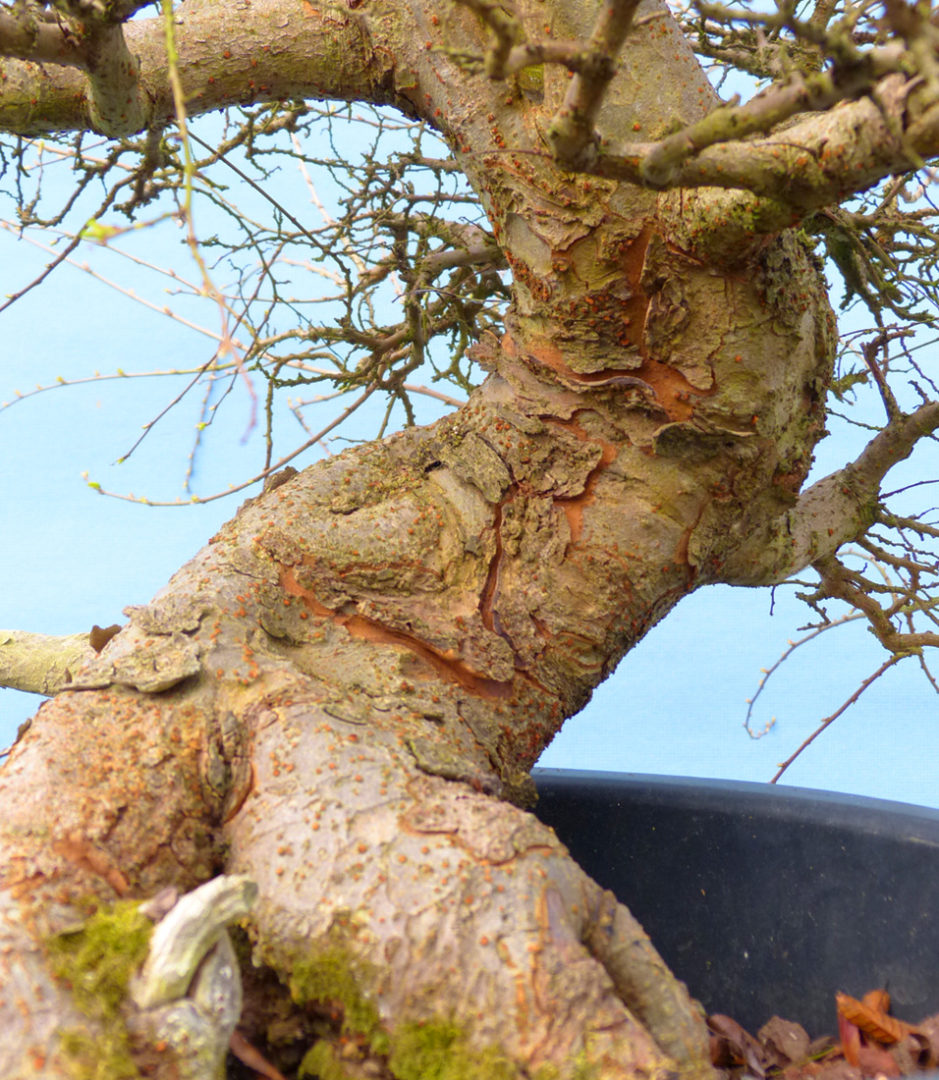 Heavily flaking bark shows the trunk has been expanding over the last couple of years. 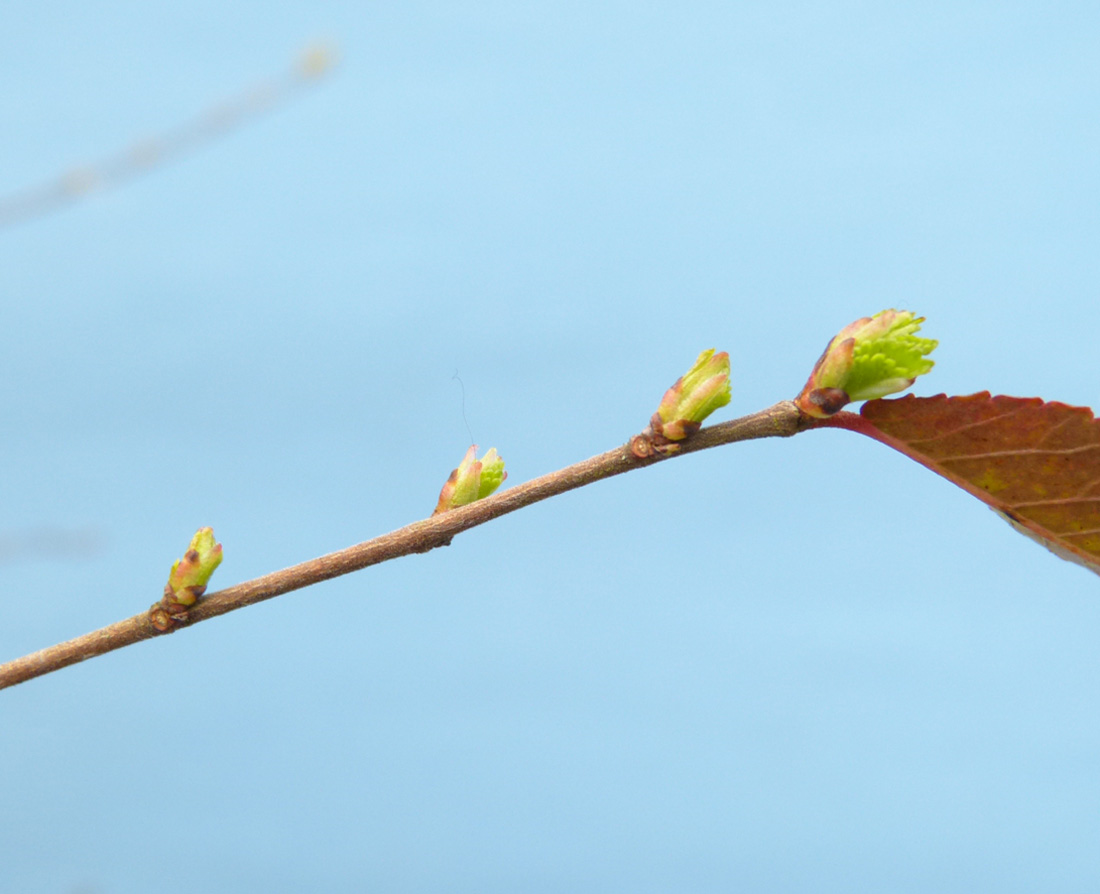 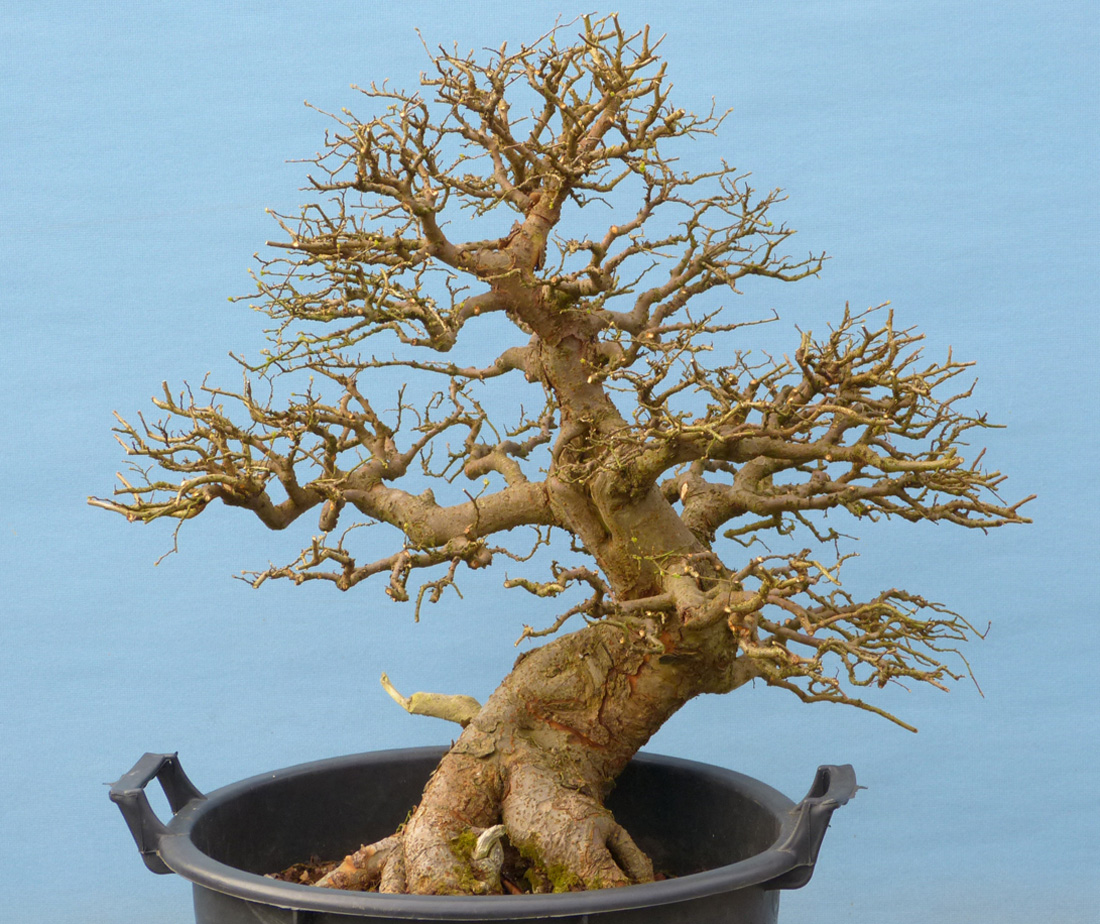 After an hour of cleaning and pruning into old wood. 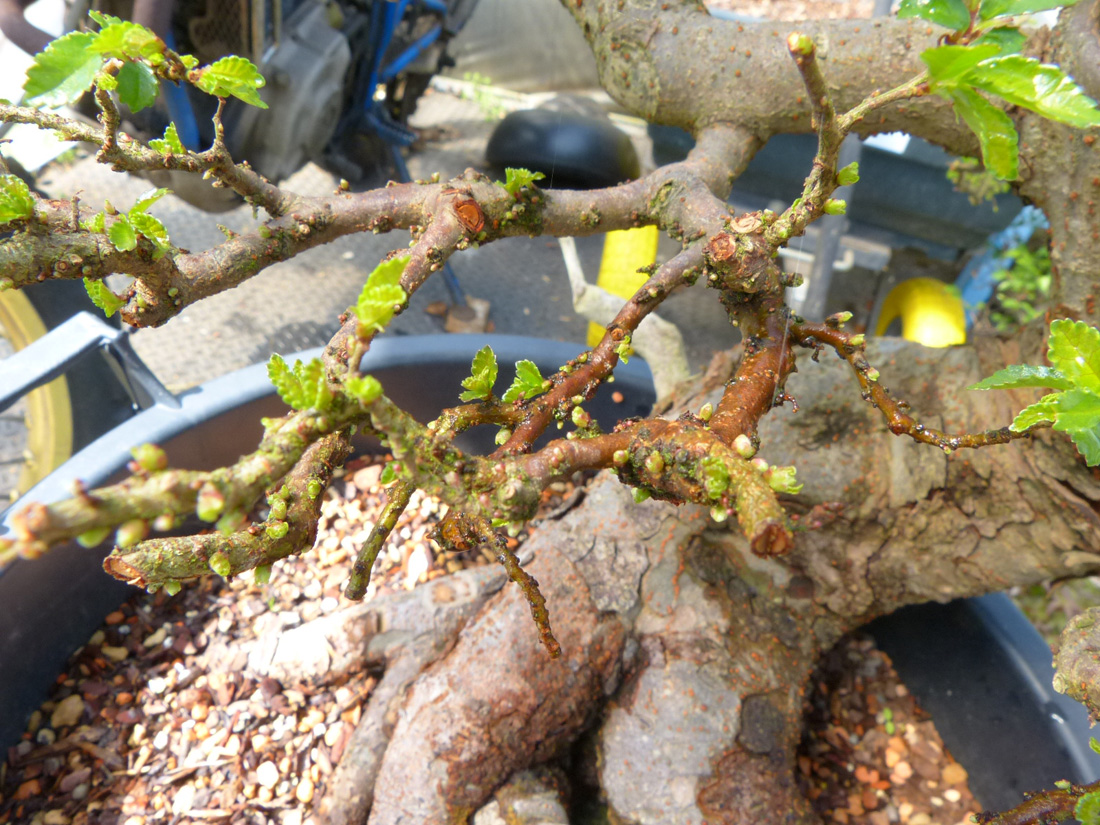 A couple of weeks later new buds exploding all over. Only strong trees react this well to a hard prune.

Come the fourth year I again did a hard spring prune and over the following summer started pruning new growth back to a couple of leaves once it reached about 3 inches in length. Fertilising carried on as normal but watering was scaled back a bit. Dense growth with tiny internodes was the result and as density increased the leaves became smaller. Over those four years the trunk increased in diameter and started making that beautiful flaking bark so typical of old Chinese elm. 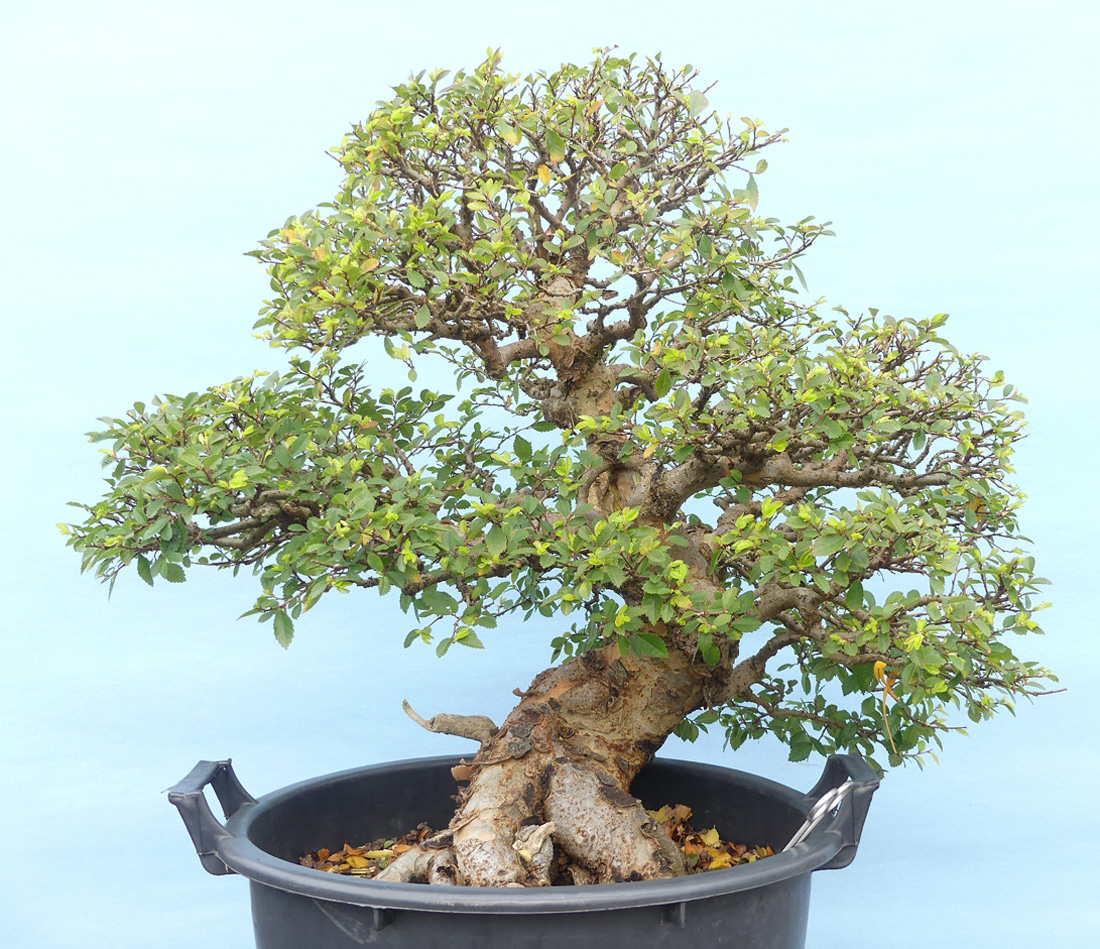 Spring 2020. Being strong it has maintained most of it’s leaf cover all winter. New growth is emerging rapidly and it’s re-potting time. 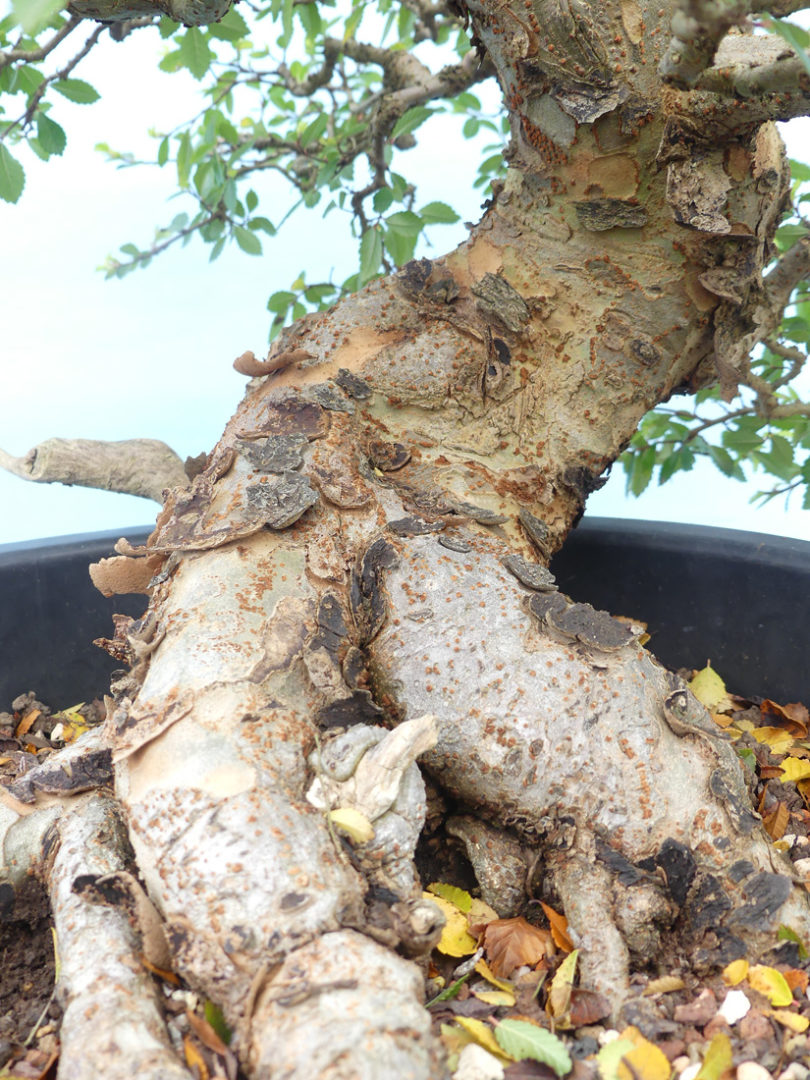 Do NOT touch beautiful bark like this when re-potting (or ever).

This spring, as the new growth opened I decided it was time to go back to a bonsai pot. At this point you would expect a fight to clear out the original compacted rootball from it’s previous tiny pot. However this growing technique fixes that. Most of a compacted rootball is actually dead root material. The combined action of explosive growth, fungal and bacterial action supported by the garden soil and the action of worms really does clear that all out and re-potting was a breeze after I sawed off the bulk of the deep rootball with my sawzall. Now the tree, much larger more craggy and impressive that it ever was with significantly improved branch structure and a beautiful root system is back in a more suitable sized bonsai pot.
Going forward, to improve the fine ramification the tree will remain in it’s exposed position in full sun. Work to maintain high vigour and rampant growth will continue as before. The only change will be pruning of the new shoots will happen much earlier, at an inch or less of extension. This will probably require a few snips every day throughout the summer. It may also be necessary to thin out the leaf mass from time to time in order to keep inner branches healthy. By years end ramification will be so dense it will practically be shower proof, like an umbrella. A healthy Chinese elm will fill a pot with root in a year and depending upon what I see next spring re-potting may happen annually or at the most every second year. Leaving an elm too long in it’s pot will result in reduced growth and progressive weakness, that’s how we got here in the first place. Owning a quality Chinese elm is a bit like having an iron ball attached to your ankle but what use is a hobby with nothing to do?
Hopefully this example illustrates my point that in order to create beautiful bonsai trees we need to learn how to add to a tree and harness it’s growth in order to help it be beautiful. Mastery of every influence upon the tree from sunlight to water coupled with judicious application of bonsai techniques like pruning is imperative. I would say that at no point in the last five years has anything been done to interrupt or reduce this trees vigour and strength. Over that timeframe I have spent no more than a half dozen hours messing with the tree. However in that same time period the tree has spent 44,000 hours becoming more beautiful than ever. Our input, when applied correctly should be very small indeed. Trees want to be beautiful, all we need to do is allow them to be just that.
G. 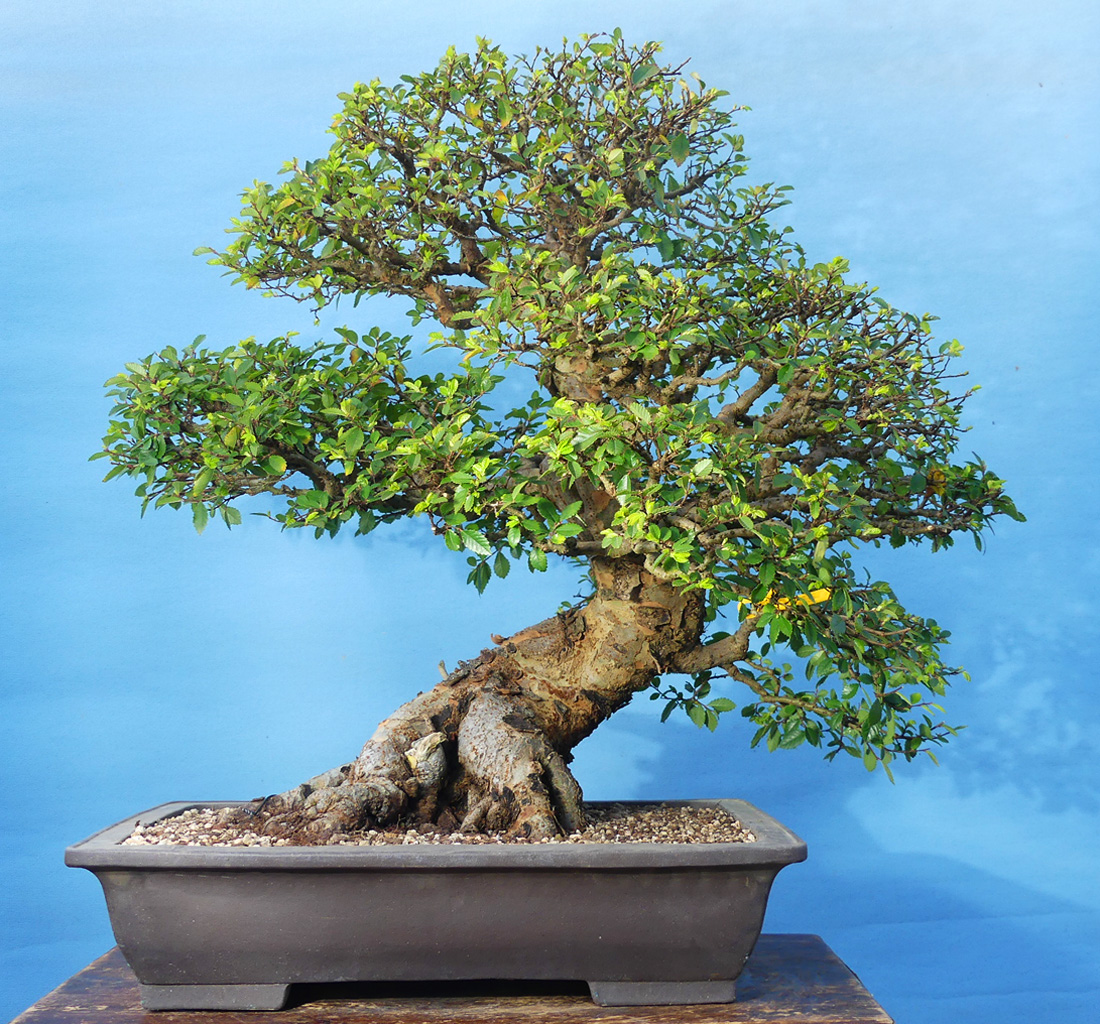 Facing a bright future. Now the work really starts in earnest. The better and older a bonsai becomes the greater the workload.

Left alone this tree would have slowly shed branches before ultimately keeling over dead.