I remember decades ago, around the end of the seventies to be precise, my parents took my best mate Woody and I down to that there London. We were heading to Wembley arena to see Ritchie Blackmore’s Rainbow, a big deal for a couple of clod hoppers from the sticks and quite a drive for the old man. At some point we ended up a bit lost, not that the A to Z ran out of charge, we just got in a muddle. So the old fella pulled up at the side of the road and accosted a passer-by like you did back then. What follows is the honest truth…

Dad wound down the window and called the fellow over asking if he could help us out with directions. It was dark and raining and this fellow walked over and stuck his head through the window, looked at dad sitting behind the steering wheel and in a deep Irish accent said ” You’ll be the driver then?” After a little back and forth he then said “I wouldn’t start from here if I were you!” So, he gave us instructions on how to get to a good place to start from so we went there and asked someone else…. eventually we arrived and got sever neck pain and lost our hearing for a couple of days. A seminal moment for a couple of young lads alone in a stadium full of thirty thousand pissed and stoned rockers.

Learning to understand and master bonsai is the work of a lifetime and not for the idle or tired of hand. It will also cost a fortune both in time and money. The only thing you can get for nothing is…… nothing. I have said it here before, life lessons cost money, goods ones cost lots. In my experience most folk are looking for an easy and cheap quick fix to satisfy their bonsai ambitions. Categorically, you cannot own spectacular bonsai and do right by them without having paid your dues. Without a deep understanding of horticulture your bonsai may survive but they certainly won’t thrive.

Sadly most folk who get into bonsai these days do so without personal contact with a qualified bonsai master with a proven track record. Getting into bonsai on the cheap is easy these days but cheap, and easy are mutually exclusive to long term success in the mastery of the art. I see so many social media forums and groups where folk are proudly posting images of their  little trees asking what their next step should be. I know how it goes, below are my first two ‘trees’. However an open forum where anyone is free to post is largely worthless in developing our understanding of bonsai. One of the fathers of British bonsai once told me these things are “….a bunch of know nothings trying to teach a bunch of do nothings”. Harsh to be sure but there is some truth in the statement. The net result is a lot of confusion and often a lot of discouragement. Let’s be straight here, learning bonsai from the ground up is a massive SLOG, especially if you also have to learn the horticulture too and the road is full of pot holes. 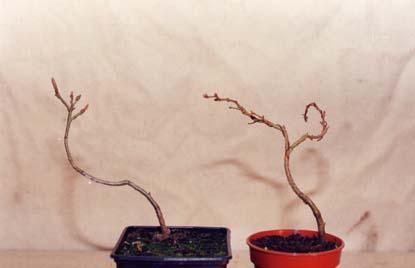 These were my very first ‘bonsai’ and worthy of a photo!

So, when I am being questioned about what to do with little trees like this my answer would be “I wouldn’t start from here if I were you“.

The other question I get asked is “….how big my bonsai will get“.

The issue here stems from a fundamental ignorance of the process. This has mostly been arrived at by folk buying bonsai seed kits, about as much use as a double ended condom. Folk are also keen to buy cheap ‘Starter trees’ without one clue about how to develop them. I have lost count of the number of one year old seedlings I have seen in bonsai pots. One time, and only one time (ass) my neighbour came over and looked at my trees and genuinely asked how long it took me to grow all those from seed. To be fair all he grows is grass and his wallet so maybe I can give him a pass. Growing bonsai is a multi stage process and each process takes a lifetime to fully master and even then….

In reality most bonsai trees start large and are made smaller. This gives us a big trunk in the shortest possible time. From there we can jump right into step 3 and 4. Growing a trunk in open ground is a specialist skill all it’s own and I only ever met a couple of folk who can do it properly. My advice is spend some money and get alongside an expert with a proven track record. A big social media following does not qualify a bonsai enthusiast as a bonsai master, that’s a moniker that has to be bestowed by other bonsai masters, not feckless followers who are easily impressed.

I thought, as a good example of contrast between the hopeless material I started with as pictured above I would show you the sort of thing I prefer these days…..

Time to get our bonsai the right way up. 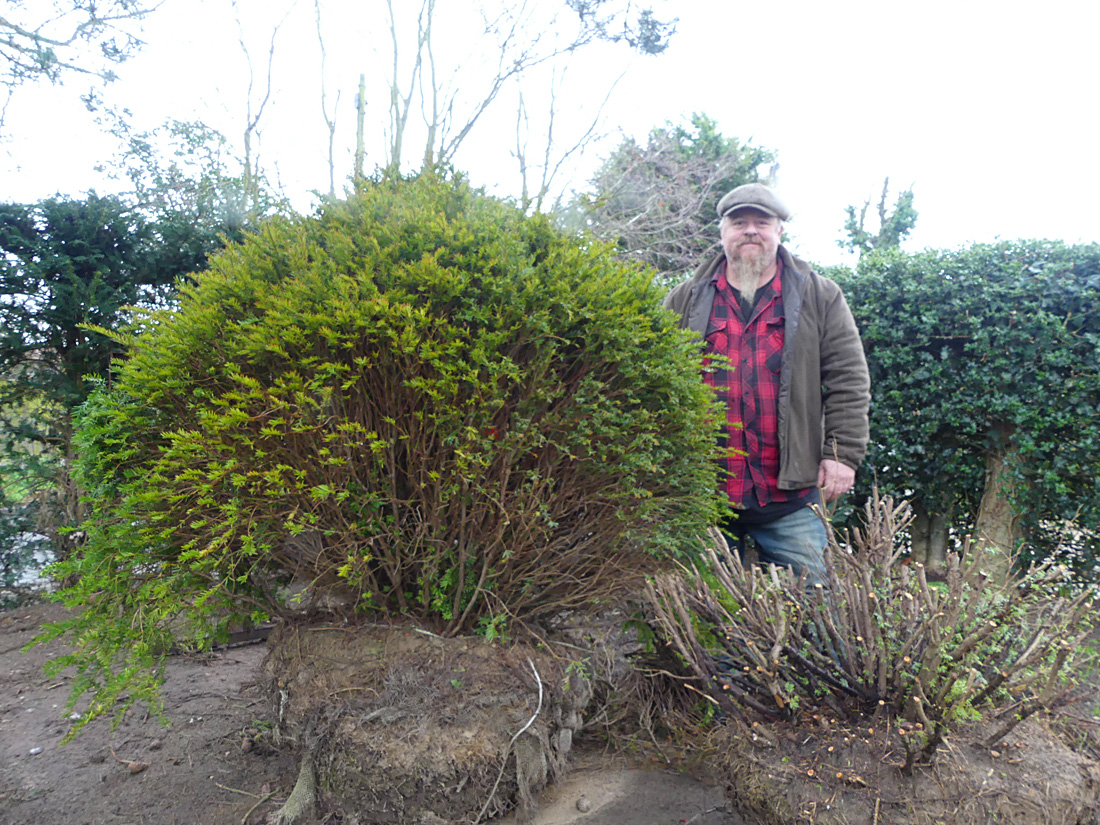 Trust me there is a trunk buried in there somewhere.