Here in Dear Old Blighty we are in the midst of change on a scale not seen since WW2. In general we people hate change, it represents uncertainty and is a harbinger of  things unknown. I have reached an age now that I have learned, without doubt, that only one thing in life is certain and that certainty is CHANGE. There really in no point in resisting change. History is littered with the remains of those who stood resolutely in the path of progress.

Having reached the venerable age I have, another thing I know is that not all change is good. As a species we are not talented at doing what is good for us. We have vengeance, destruction and death in our hearts and all it takes is the right set of circumstances for us to unleash our hatred and mayhem on the world. Granted, most of us would not unleash a cataclysm upon the world like the Nazi hordes. However when your neighbour has been running a chainsaw or angle grinder for days on end who wouldn’t want to go punch him in the ear? All I can say is thank God for good parents who instilled in most of us a sense of right and wrong.

So change is inevitable and many times it comes uninvited and takes us in directions we never planned. That’s exactly how I got here. I never intended to do what I do today. Thirty years ago I found myself too broke to continue with my pursuit of custom cars and fast motorbikes. By an unrelated series of events I ended up staring at a bonsai tree and over time I fell under the spell of it’s magic. The mix of horticulture and mechanics with a little imagination thrown in really did appeal to me.

Being potless I was limited in what I could achieve. That as it turns out was a good thing. I have always lived my life by the directive “Use what you’ve got to get what you want” I didn’t have any good trees back then but I had a lot of skip rats and stumps. After I had done enough of them they opened up the world to me and ultimately got me those valuable assets that had alluded me for so long.

Fast forward thirty years and things have changed. The fly in the ointment is that I now have no time to do the very thing that bought me here in the first place. We are about to employ our fifth member of staff and running a business like that, here in Blighty, is no mean feat. Every single year we have been in business our turnover (and corresponding workload) has increased, even through the recession of 2008/9. Today we do more in two weeks than Bonsai Mart did in a year. Today, if I am doing bonsai, it’s for the business and for our lovely customers. I have a world class scots pine sitting on my bench, it’s been there for twelve years now and apart from keeping it healthy I have never worked it. That makes me very sad.

This all became apparent to me late last week. I was watering, as I do a lot, and noticed a large pot full of weeds in the front yard. There was a bunch of deadwood and some juniper foliage sticking out of it. Upon closer inspection i remembered it was a very special yamadori sabina I bought at the end of last year. I felt bad and it seemed like a good idea to at least pull it out, remove the weeds and preserve the deadwood before winter.

Once out and on the trolley I remembered just how good this juniper was and I felt like a bit of a shit-head for having treated it so. Once in the workshop and free of weeds I was thrilled to see just how good this really was. I cleaned it up a bit and having brushed up the deadwood, gave it a good soak with Lime Sulphur.

This beautiful tree has a long way to go, it’s very early days. Thankfully my appreciation of good yamadori does not depend upon it being styled as bonsai. These days I get as much enjoyment out of having my garden littered with these venerable old trees as I do show quality bonsai. The long and the short of what I do is that I LOVE trees (unlike my neighbour with the chainsaw and the swollen earhole). I may never even get this tree styled but that in no way detracts from my appreciation of it. I’m going back out to the weed patch again to see what else I can uncover…. 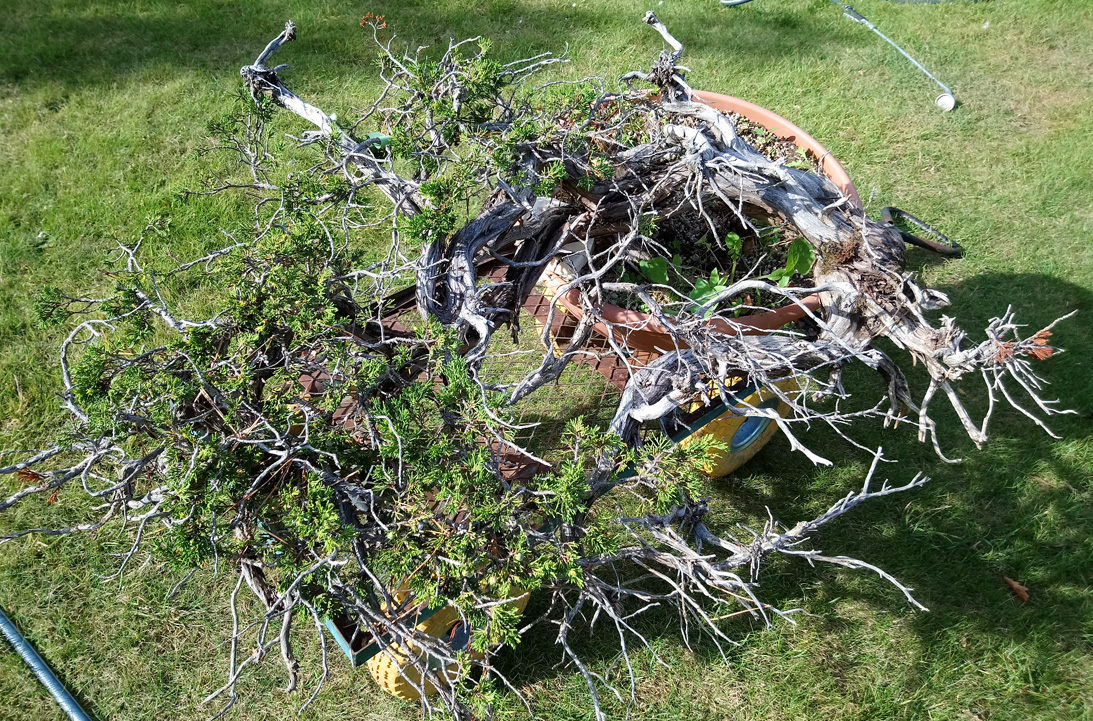 Easily lost in a patch of weeds. 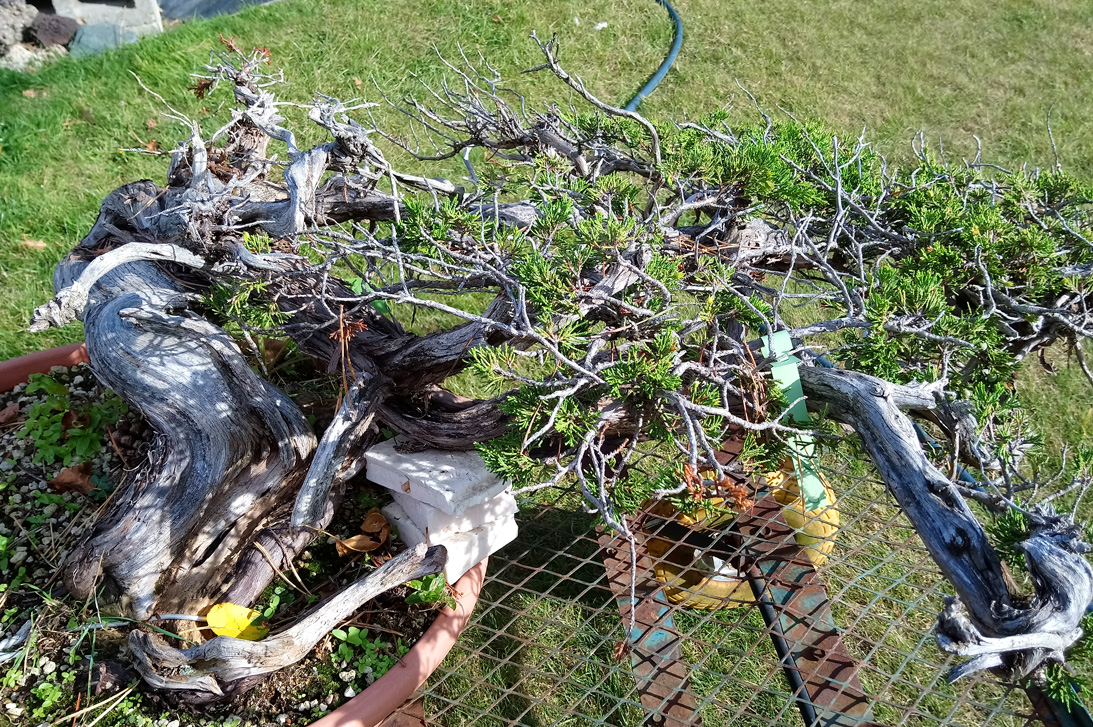 A diamond in the rough. 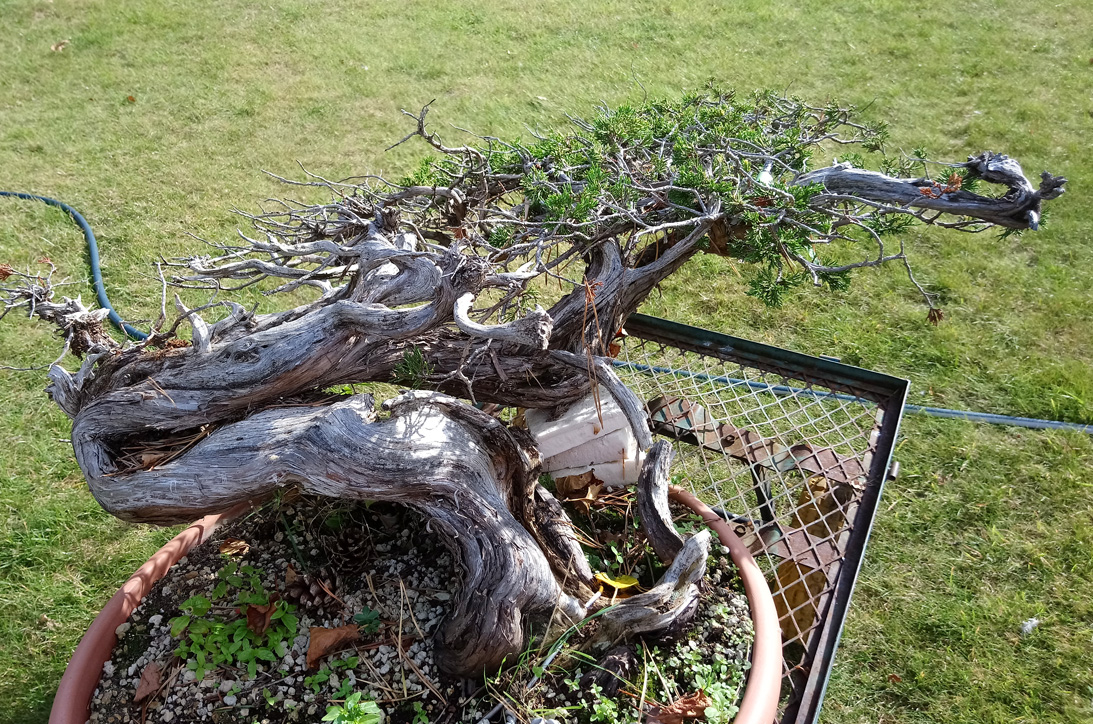 The mysterious ‘weeds and polystyrene’ technique. 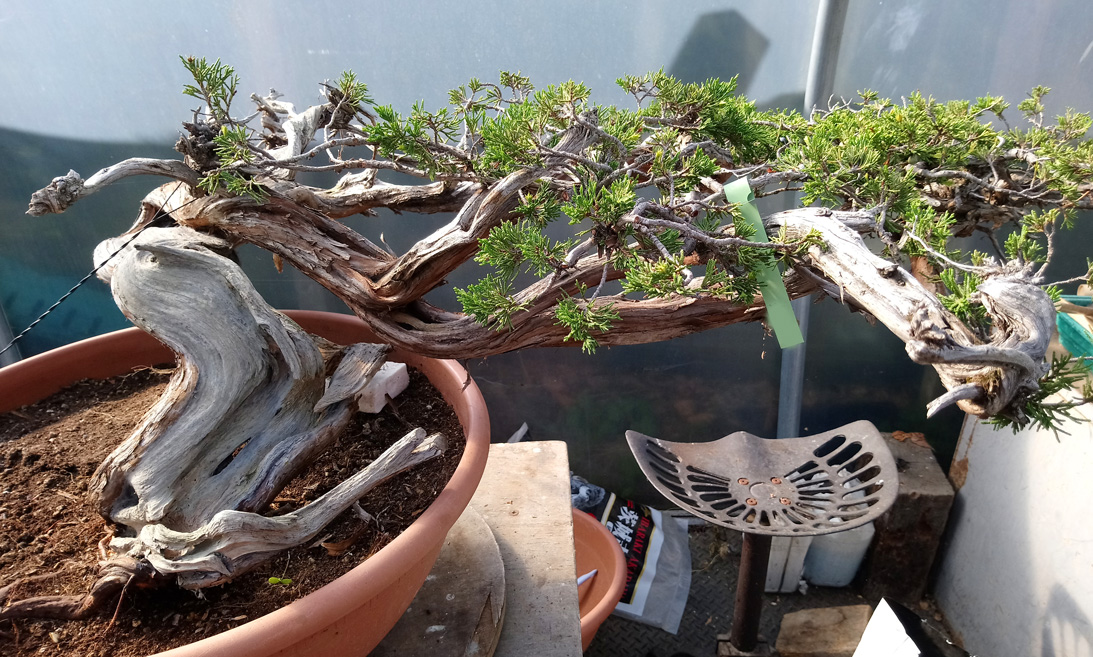 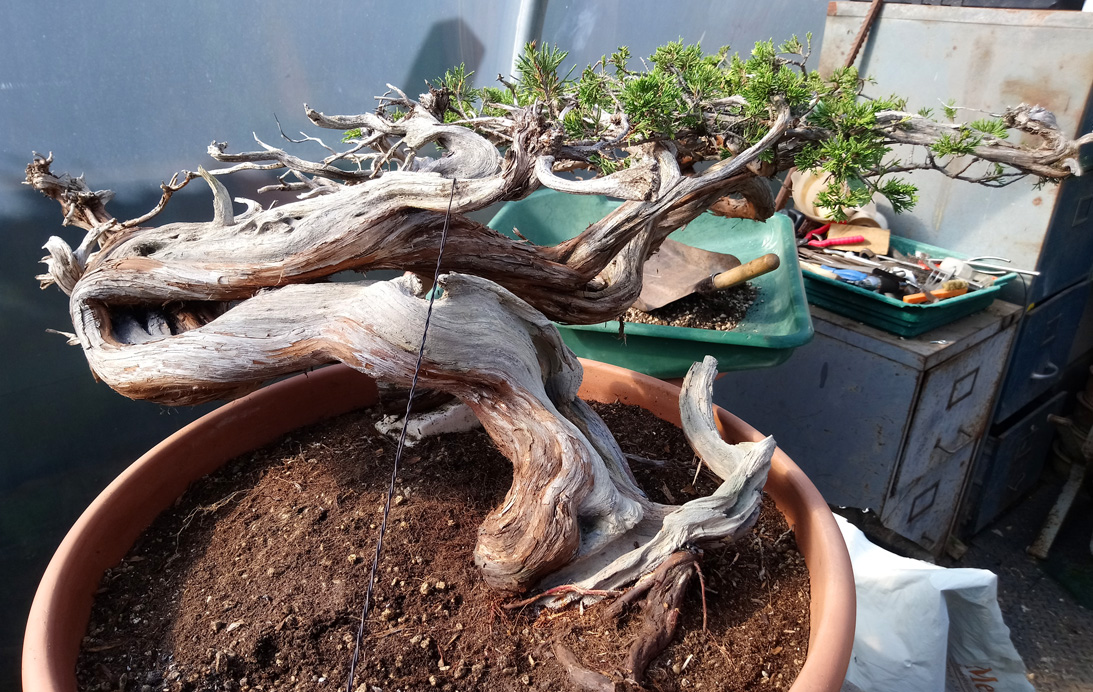