I know very well that most folk have a great deal of difficulty in bonsai when it comes to sorting out the way forward for their raw material. A few people are seemingly blessed with a sixth sense when it comes to such issues. I have no answer for this but I do know that it’s often an excuse for inactivity. I have lost count of how many times I have heard something along the lines of, ‘Oh I could never do that, i’m no artist’. My retort would normally be a forthright “When was the last time you tried?” Way back in the beginning of my bonsai career I literally binned no end of piss poorly designed and badly executed examples of my fumbling bonsai attempts. I’m just too stubborn to give up and after about thirty years I started to get the hang of it. A wiser man than I has said you learn more in life from your failures that you do your successes. I am aware of the esteem within which some folk hold my skills, what does that tell you?

Perhaps my greatest asset in the early days was my impressive lack of funds. I had a lot of dreams but I didn’t have a pot to piss in or a window to throw it out of. Therefore my bonsai dreams were built upon skip rats, shit I was given and stuff I got from the tip by hanging around the green waste bin. That’s some ugly stuff so I had nothing to loose by letting my imagination and power tools run riot. To this day I still get excited when I see green sticking out of a skip. I am still a sucker for a bargain as I suppose most of us are. However in my experience opportunity usually presents itself wearing overalls.

Being late summer it’s a good time to be messing with the roots of sabina juniper. Therefore I could not put this off any longer, I had to sort this mess out today. I bought this in Spain earlier in the year, only collected a year ago, it was a good price, I suppose nobody wanted to sort it out. Time to roll up those sleeves…. 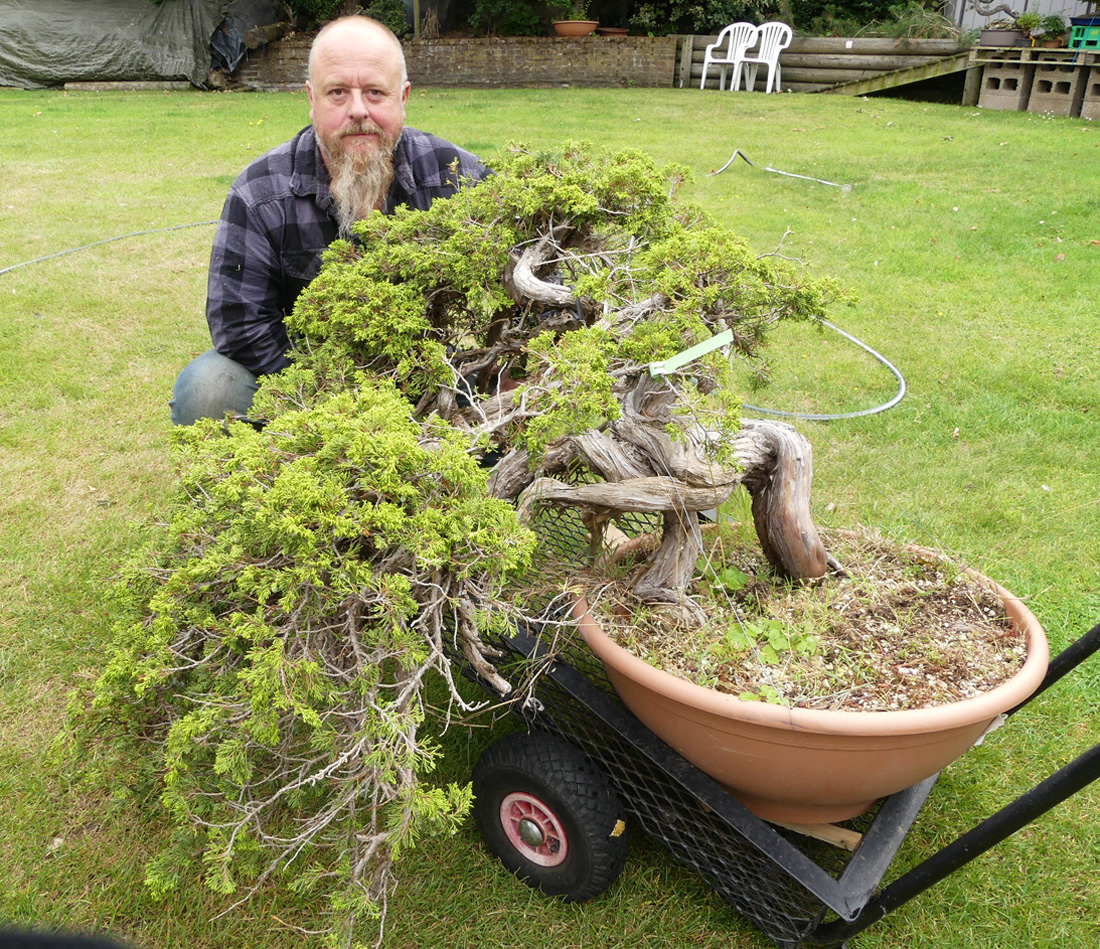 I left this out by the front gate and everyone who came here over the last few months walked right by it. Insane trees tend to have that effect. First thing to note is that there appear to be two junipers in here. I am happy with the growth rate considering it’s early days so time to jump in. 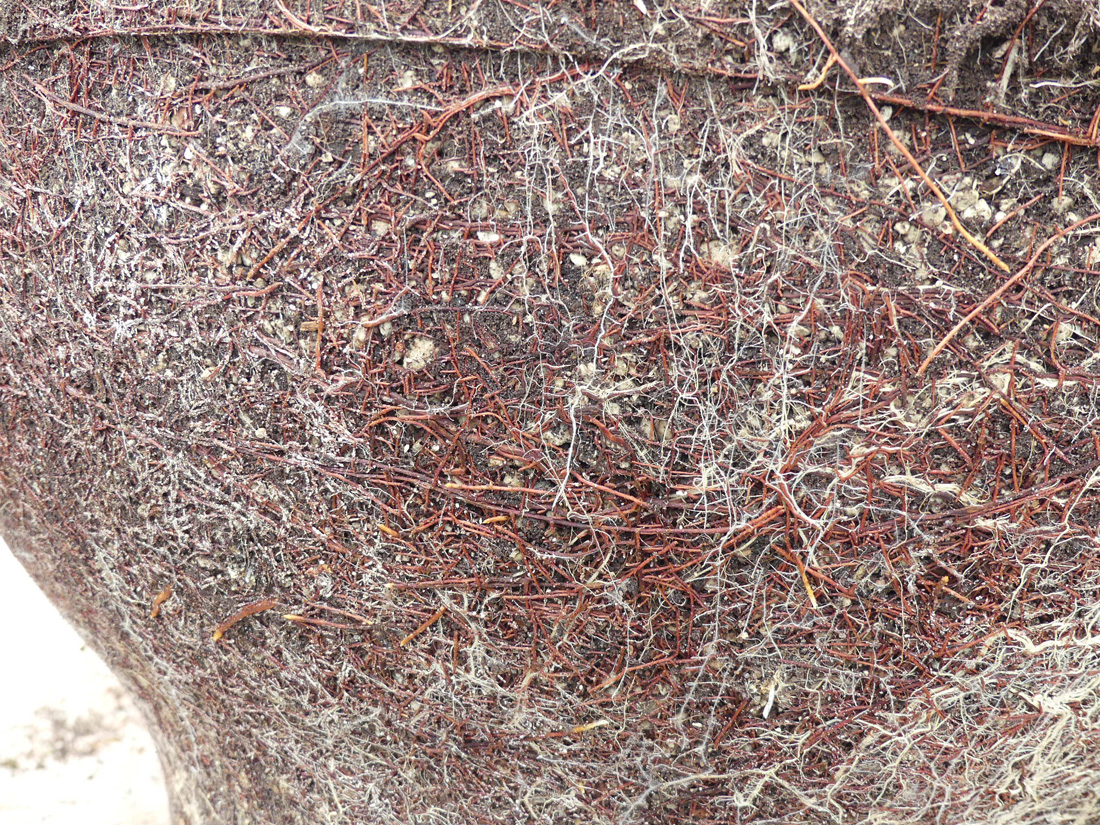 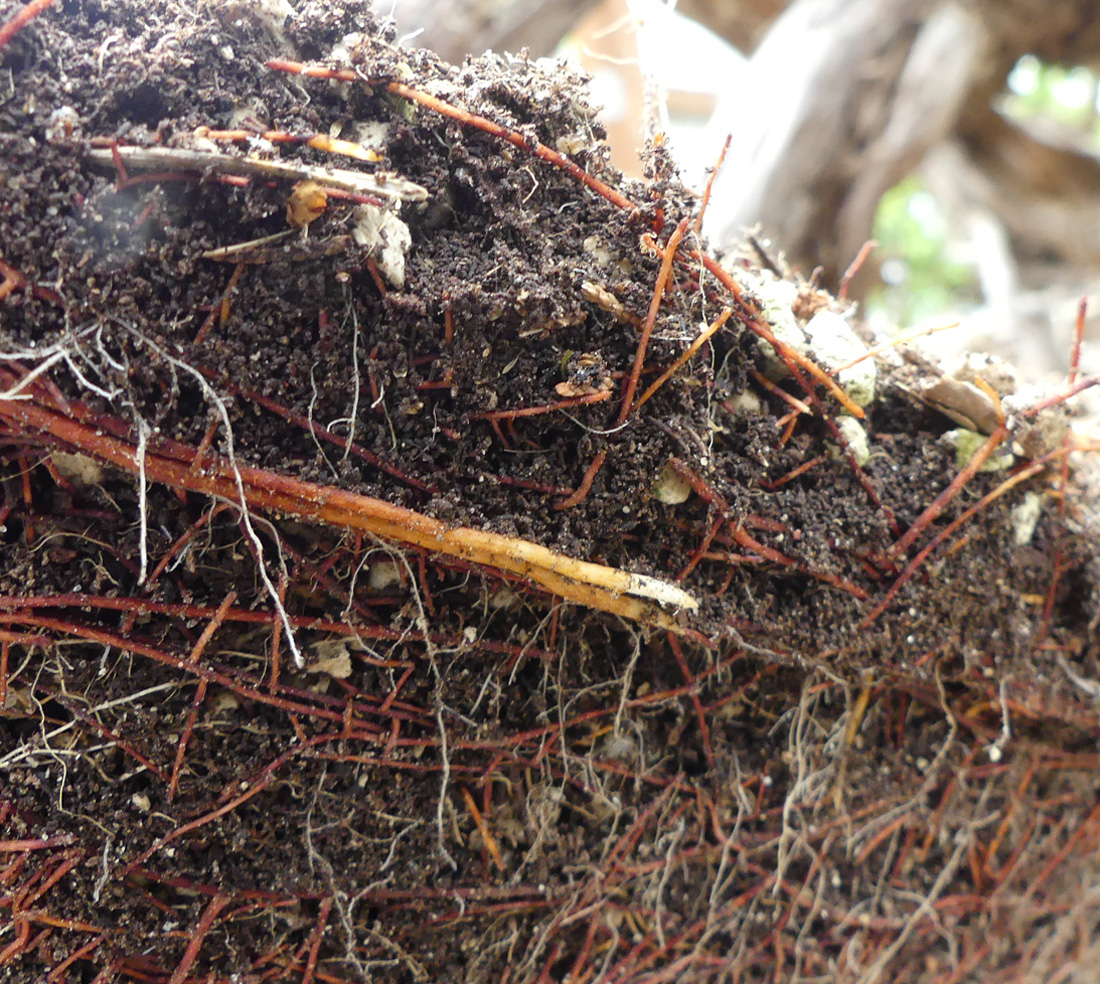 Once out of the pot the first thing to notice is just how much root there is considering the tree has probably not been in this massive pot for even twelve months. Secondly there are fresh new white root ends. This shown me the tree is actively making root and so my timing is good. If a tree is actively making root, after our intervention it’s just going to continue. 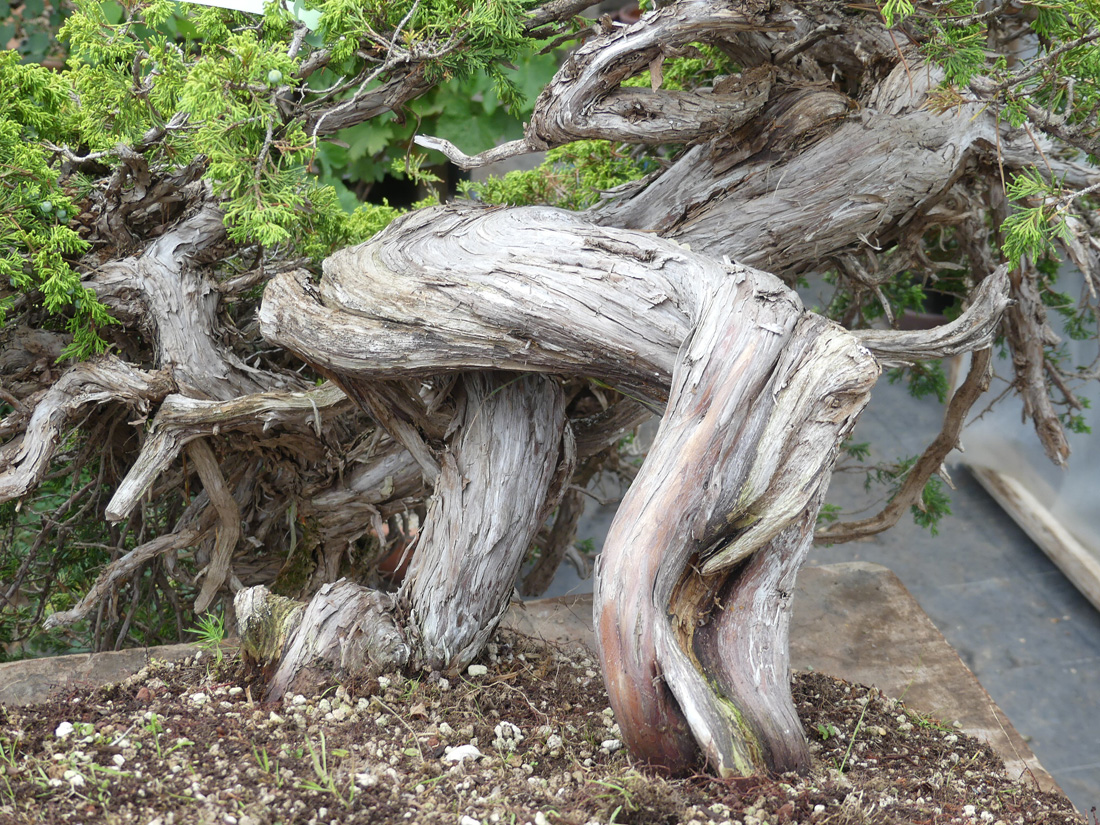 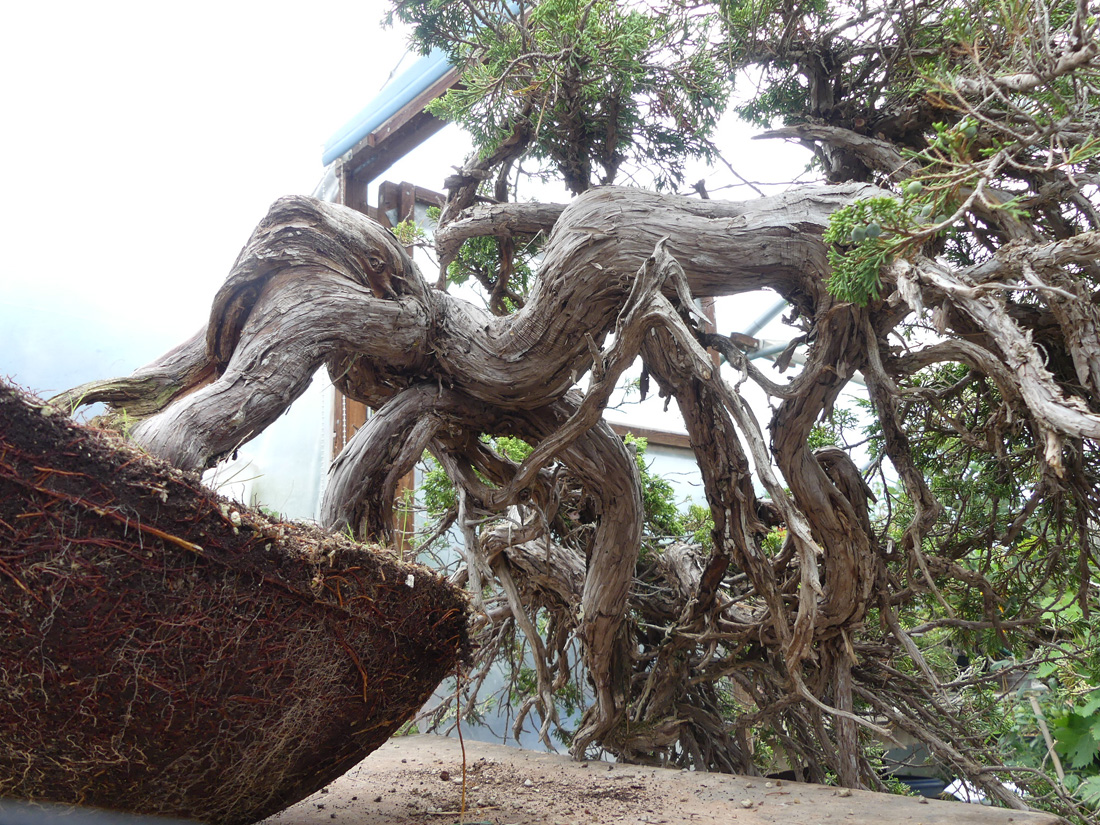 Next, from this angle it’s easy to see we have two trunks. Sadly these don’t go well together so this will need to be separated into two pieces. Thankfully juniper root wherever they touch the soil so roots should be no problem. An hour picking through masses of roots revealed a powerful Y shaped trunk with each arm forming a separate trunk. This was easily split along it’s length producing two root masses. Both parts of the tree were roughly potted up into an akadama, pumice, bark mix. These will be put in a shady part of the warm greenhouse for a couple of weeks before going outside in the full sun for a couple of years. Sometimes you have to roll the dice and just part with the cash whilst trusting your instincts. I have a feeling that in this case my gamble may well pay off which will make a change 😉 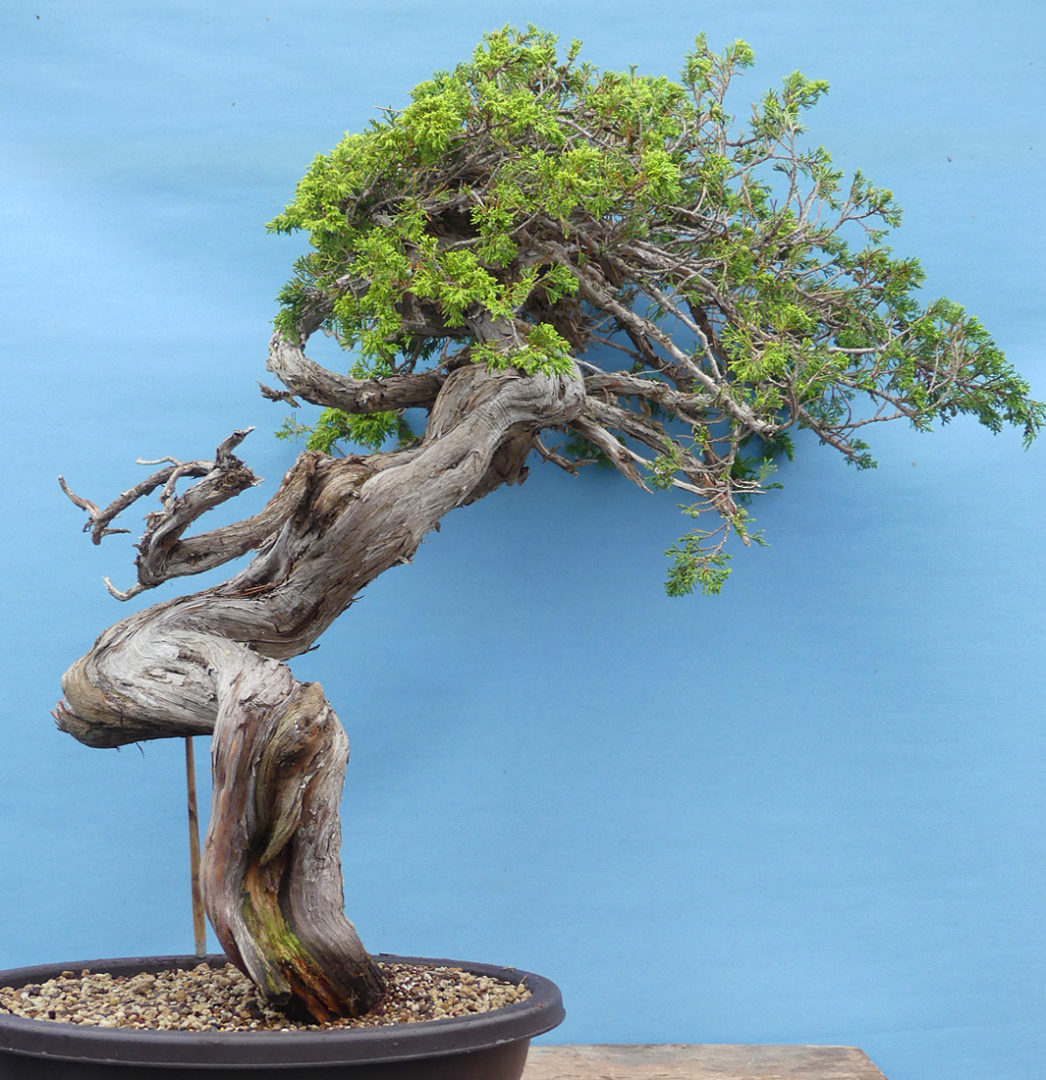 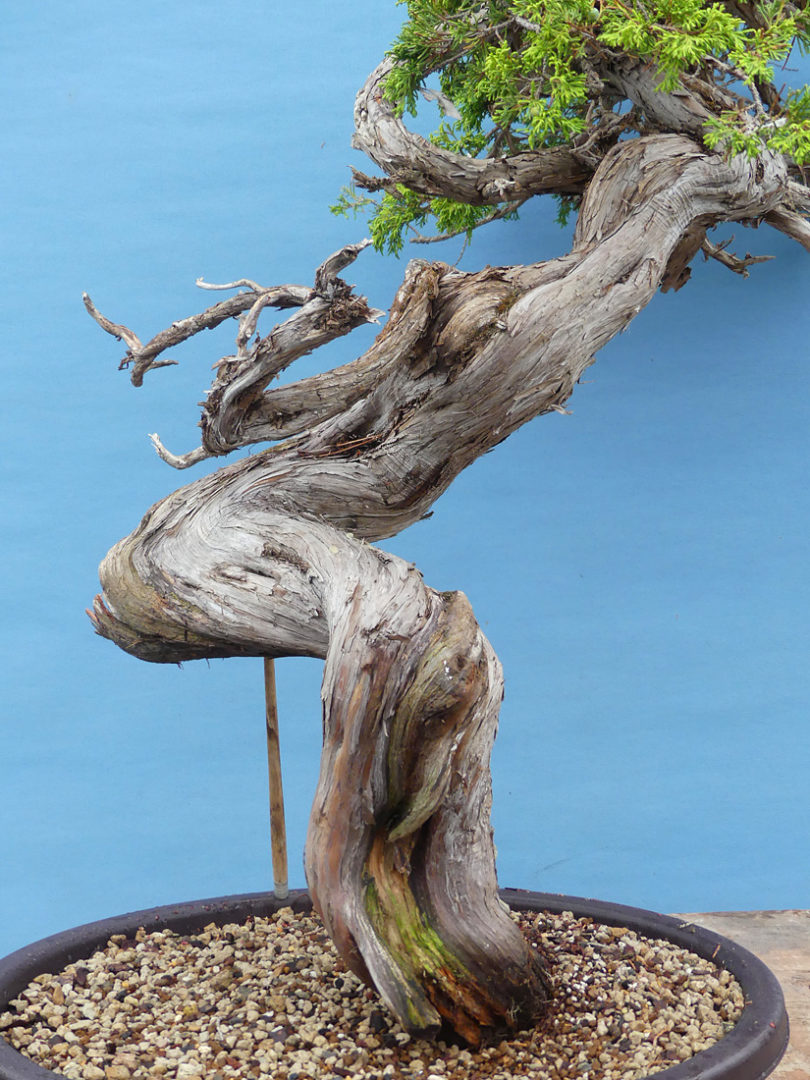 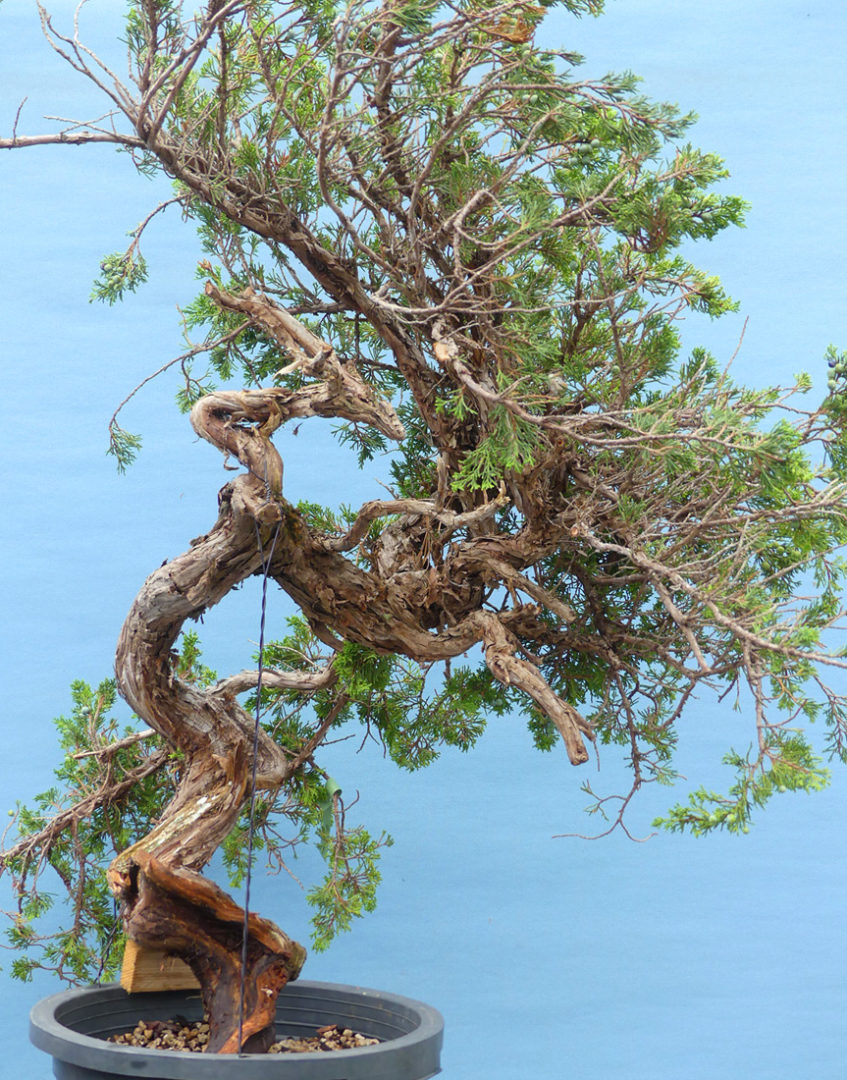 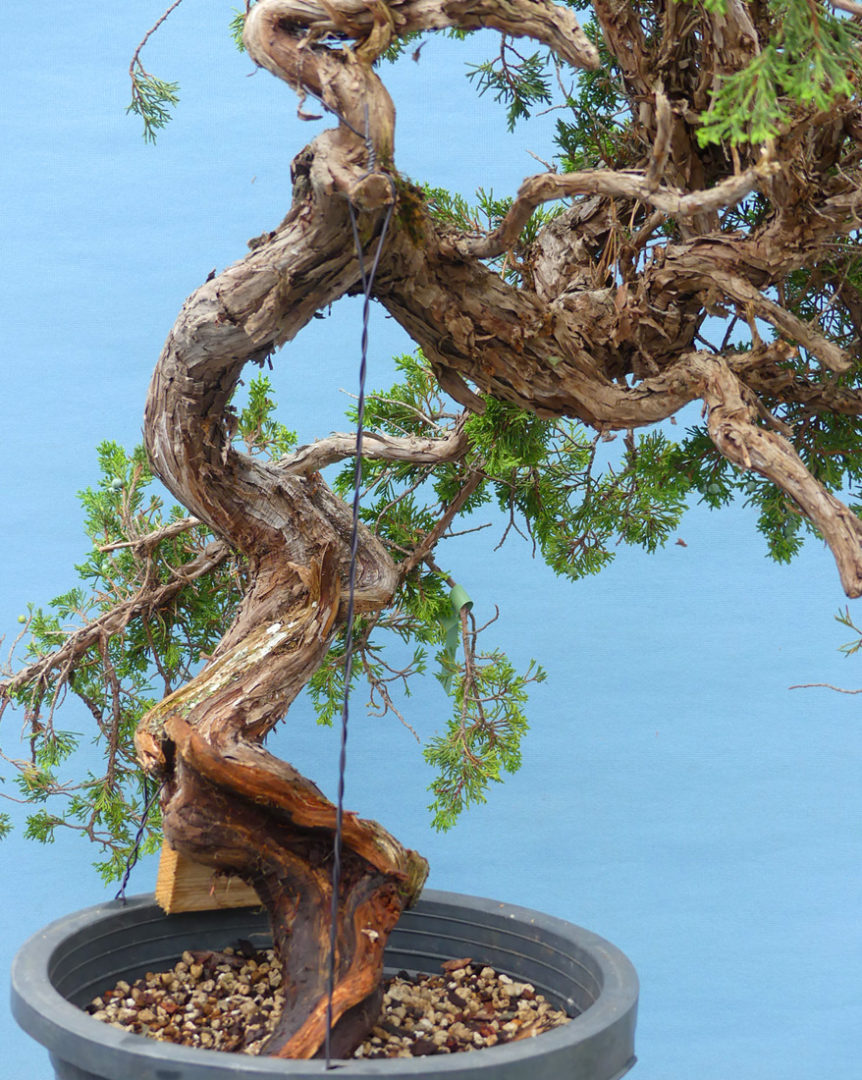