Scots pines are coming along early this year. I’m not normally troubled by them until the beginning of May, but this year we are definitely early, probably spurred on by last summers good weather and a mild winter here.

This big lump arrived here about four years ago. I took a risk on it simply because it looked very weak and was not long since it was collected. Still, nothing ventured, nothing gained. If everything in life were as simple and reliable as a scots pine I think we would all be a lot happier. 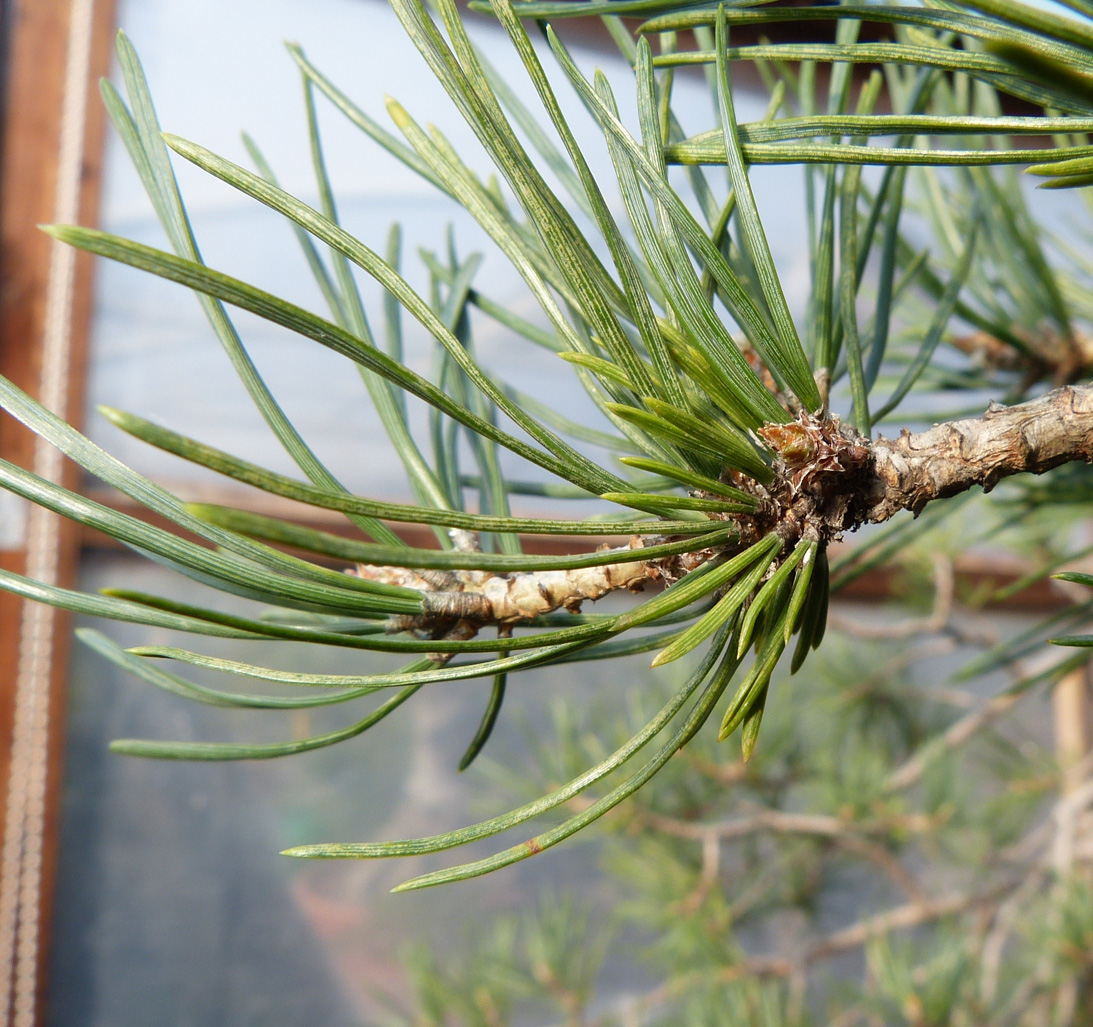 This image tells the story. Three years of needles 2018 on the end preceded by a gap where there were flowers, next 2017 and the little tiny ones are 2016. The needles the tree came with were HALF the size of those tiny ones, about 6-8mm. Notice no significant extension growth at all. Because the tree was so weak, dealing with the root system would be impossible even though the pot was largely filled with heavy clay and rocks. The improvement in the trees health was achieved with some very careful management of the trees growing environment and soil management.

Today we are at the point that I can deal with that soil. The tree has good buds for this year that are now turning green and elongating but there is not a single adventitious bud on the tree. Left to it’s own devices this tree will lose what little strength it has from this point onwards unless we deal with that field clay. I have been here a hundred times before with collected scots and this operation is critical to finally getting this pine firing on all cylinders. 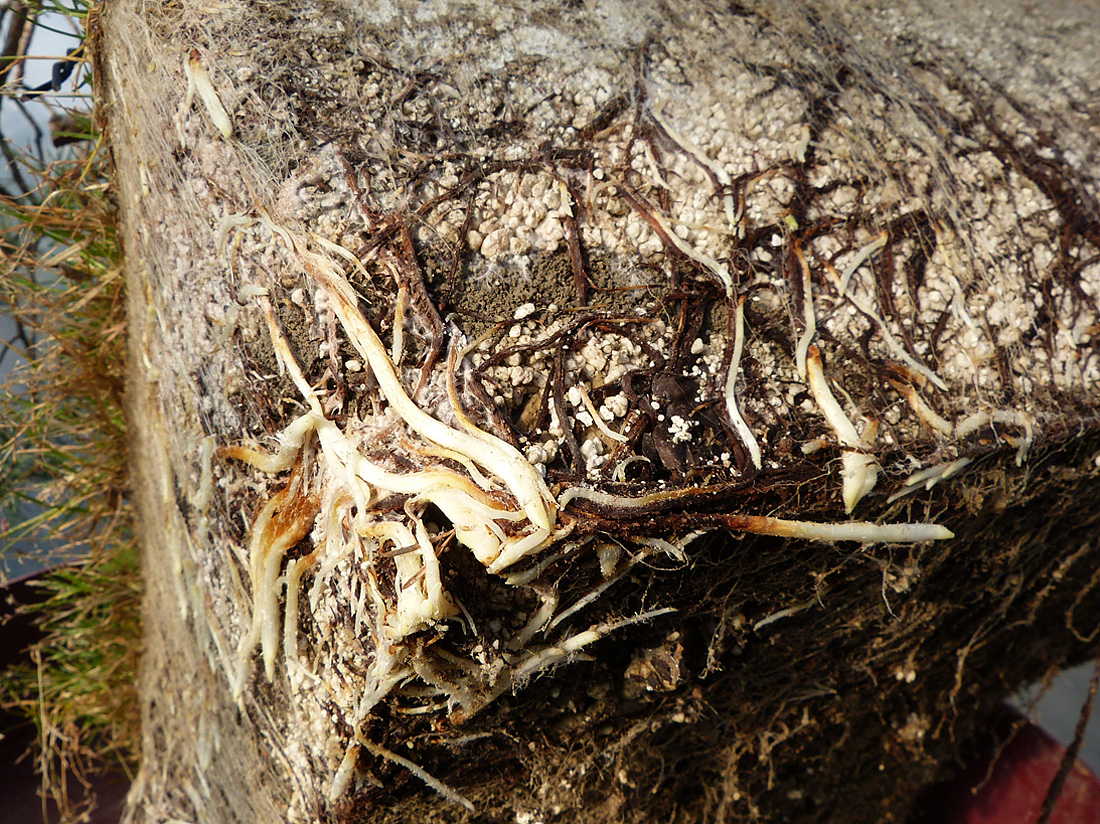 New white root ends and greening buds along with a warming forecast means there is absolutely no risk involved in this work. The soil is also nice and dry which makes the work much easier and more pleasant. 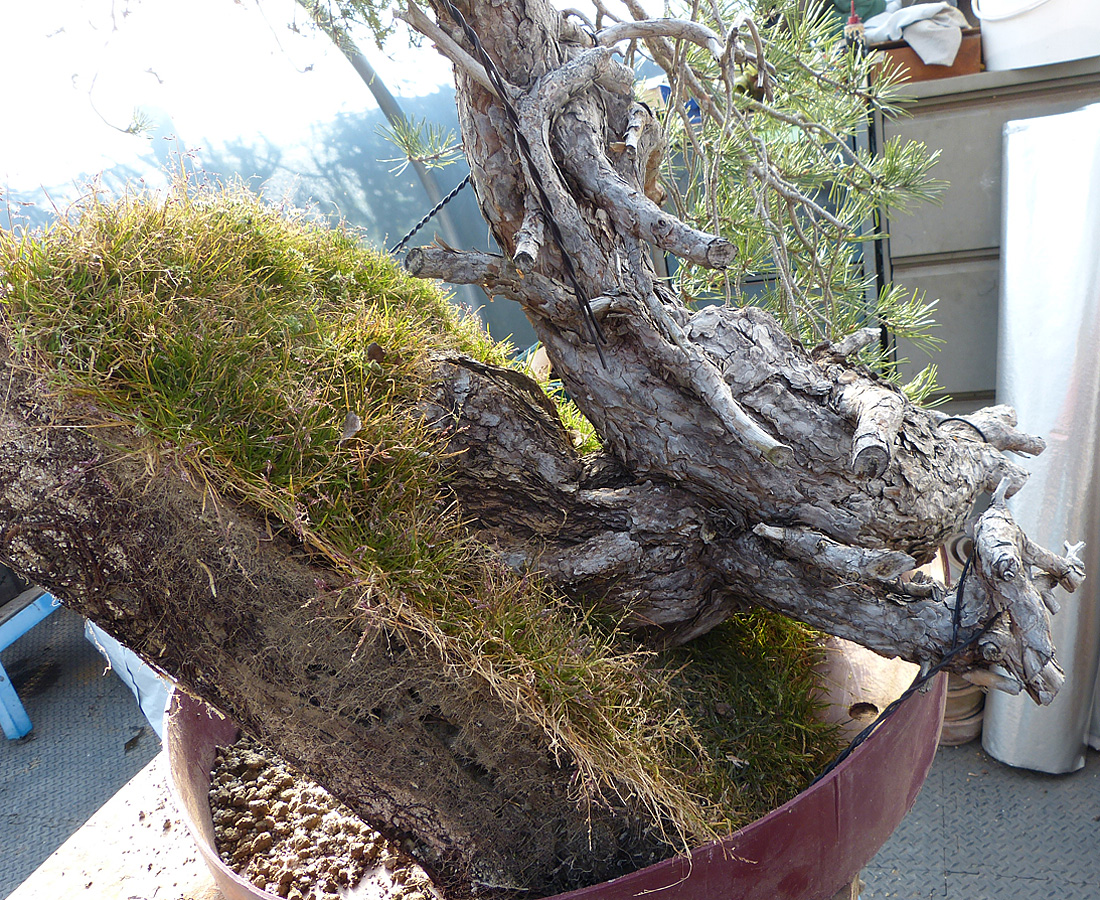 The grass has been an important element in managing this trees very poor root system. Anyone who turned up at the workshop with weeds like that would normally get a slap but here I used it to suck moisture from the soil. Without it, even in summer I only needed to water about every 7-10 days simply because the pine roots were not drawing any water. By having the grass dry the soil, I could water every time it wilted which was every couple of days in summer. That meant I was getting more oxygen into the rootball which helped develop the pine’s roots. Grass is also good at supporting fungal activity in soil. 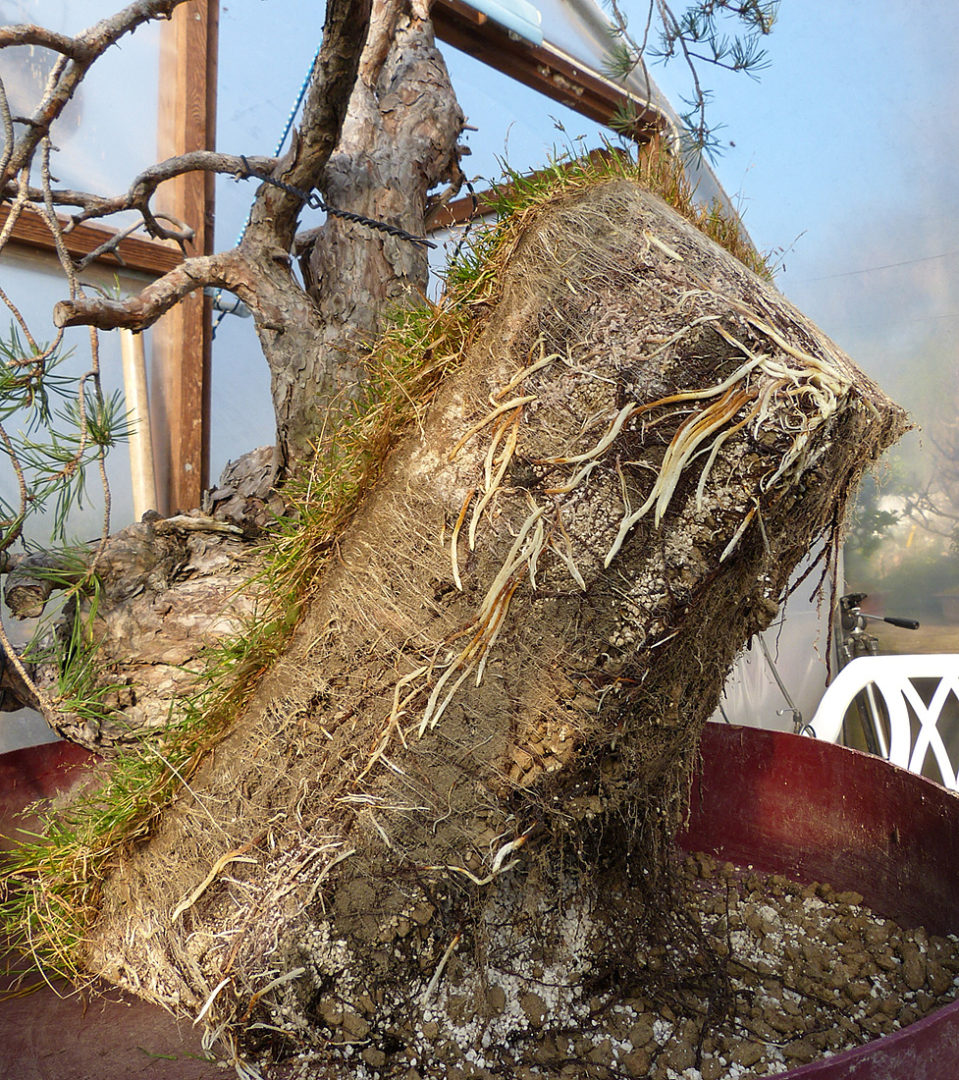 Look closely at this image it tells the whole story right there if you can read it? Here are the bullet points…. Either end of the rootball consists of perlite and pumice mix the collector used. This has good root growth. In the middle the grey patch is field clay with very little root growth. The upper part of the rootball shows the grass roots, mostly in clay and very little, if any, pine root but good root development just below that. Roots grow in the most suitable zones of a rootball like this one where there is the most adventitious mix of water, oxygen and nutrients. One thing that is very evident is the absence of mycelial hyphae. It is there but only just, and in small pockets. I would guess that 80% of this rootball is not working at all and explains the poorly condition of the tree as a whole.

Here we are directly beneath the trunk. Solid clay with no root development whatsoever. This clay consisted of about 70% of the pots volume. I entirely stripped the rootball down removing every little pocket of clay and rocks. I will NEVER wash a scots pine rootball like this but it’s absolutely vital to clean ALL of the soil away at this stage. Once this was done the cause of the trees serious problem became evident. A large root just under three inches in diameter had been cut when the tree was collected. This left behind a tiny amount of small roots which in the long run proved insufficient to promote growth. However with careful management it was enough to keep the tree alive and that’s now the start of a fledgling ‘bonsai’ root system. I would stab a guess this tree lost 90% of it’s roots when it was collected and that resulted in this drawn out process. 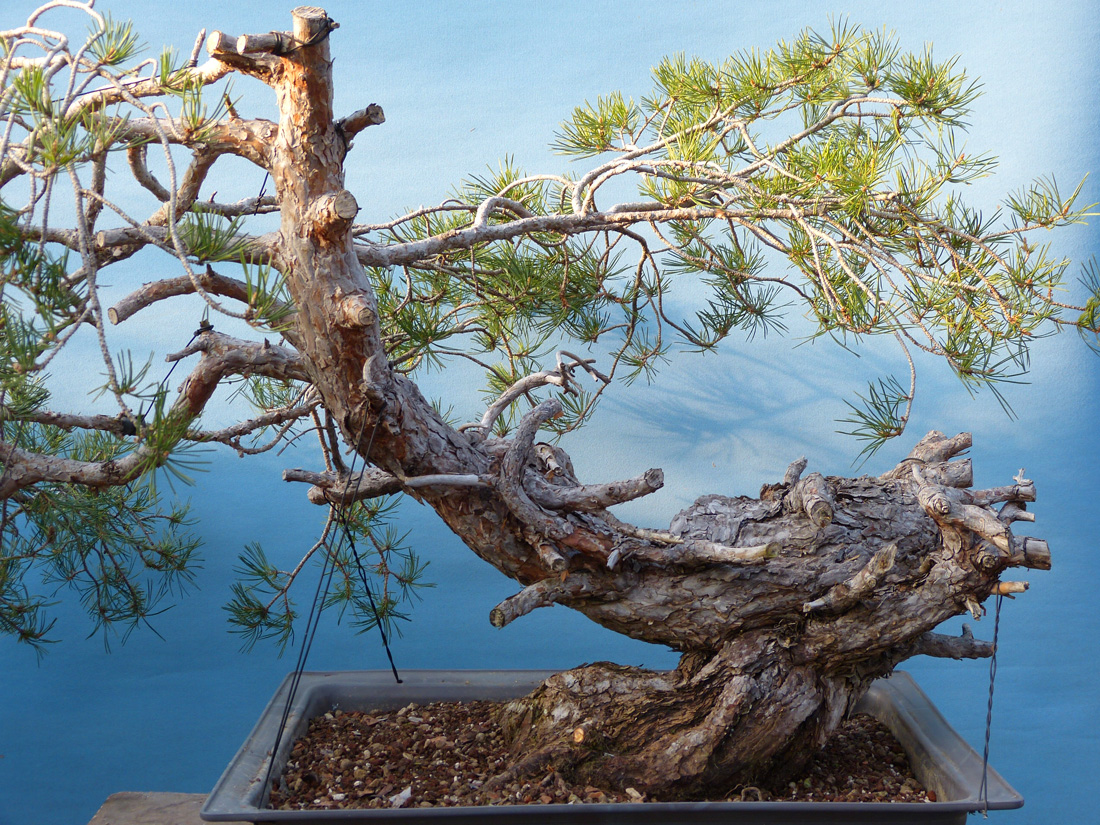 Now potted in 1″ pumice and bark with a light surface dressing of our No3 Bonsai Soil Mix. Going forward this tree goes outside into full sun with minimal watering until the new seasons growth is fully developed. From then on watering (by thorough soaking) will only be done when the soil is very dry. For this year that will help develop the trees all important mycelium and draw out strong root extension. I may give a very light fertilize with Green Dream Original probably just once. Next year if all goes to plan I will ramp up the watering and fertilising. Based on previous experience, in the second and  third year after this work the tree will literally be lifting itself out of the pot and so I can go to re-potting in the normal way with root pruning to develop the correct root structure for bonsai. This year the tree will make those adventitious buds and hopefully if I did my job right the needles will be nice and long this summer.

General
Get The Dirt Out
A Tale of Flowers & Friends