WARNING: Sage advice about bonsai preceded by strong opinionated nonsense. Don’t read if you are sensitive to such things.

In spite of my continual bitching and moaning there are some good days here at KB. Having a dark and twisted sense of humour the things that make me smile are not often to be shared with those outside my inner circle, they are pretty much beyond shock or offence. Good days will always be more frequent when the sun shines and we are getting plenty of that and it’s wonderful. I won’t waste a single minute of it.

To that end I was hacking through my inbox at 5.30am. The earlier I start the earlier I can get outside. Even before I had a chance to neck my first coffee the crap started when my internet connection failed miserably. Now I appreciate I live in the middle of a cabbage field and all us folk from Norfolk are considered a bunch of clod-hopping carrot crunchers but our money is still good and I get a bit naffed off paying for a service that’s so appalling. Serves me right for living in an aspiring third world country I guess. For such a bunch of ingenious folk we have become a shocking shambles. It seems we remain pretty good at drinking and fighting and if there was a world cup for bitching and moaning no other country would even get close. Engerland, Engerland!

Having had my early efforts at work thwarted I thought I would pop the TV on and catch the news. That in itself could easily make a TV show. Picture it, a fat old bloke sitting there all on his own in holey kecks, covered in toast crumbs ranting and raving at the TV like some Alf Garnet prodigy. My frustrations know no bounds but I do enjoy blowing off some steam and it sets me right up for the day to come. Today, unusually, I was pretty much reduced to tears of laughter.

Somewhere along the way our esteemed BBC claimed the moral high ground and became the self appointed bastion of moral standards and good advice. By and large the BBC early morning news output is so far behind the rest of the world it’s shocking but they are too daft to notice. “Impartial, free and fair” said Jon Sople to president Trump who replied “Yeah. Sure.” The BBC promotes itself as Britain’s most trusted news brand which is pretty much giving everyone else the finger in a very polite public school sort of way. I have had to stop listening to BBC output pretty much but today was an absolute classic. The presenters were doing their usual hand ringing worried face, ‘were are more educated and smart than you’ routine, spewing forth sage wisdom to us poor dumbass, country as a chicken coop, hicks about the dangers of hot weather. Basically everyone in Britain could be dead by Friday because it’s warm and we are all too stupid to come inside out of the sun and who knew we had to ‘hydrate’. Hydrate!? Don’t you mean drink something! What next? If you get hungry eat something? Just make sure it’s fat, sugar, alcohol and nicotine free.

After giving their sage advice they cut to some folk in a park in London and where interviewing a bunch of knuckleheads about how they were coping. Some twit said “oh I like to sit in the shade” someone else noted sagely it was actually cooler in the evening or early morning. Next they spoke to a pretty girl out at lunch sitting on the grass who, as I recall, said something along the lines of “This isn’t hot at all, i’m from Africa, I wouldn’t call this a heatwave, it’s fine.”* That made my day 🙂 Take your nanny state and shove it in the shade! I have been outside in the sun and I am no more dead or nuts than I was when I got up this morning.

Brit’s do love to whine, especially about the weather and I am always in that queue. They are forecasting over thirty degrees all week which is chicken shit, that’s not hot, sure it’s warm, it’s nice and warm and what’s up with that, it’s summer? Today I spent two hours in my greenhouse and here is what the thermometer said just before lunch (and no it’s not broken). 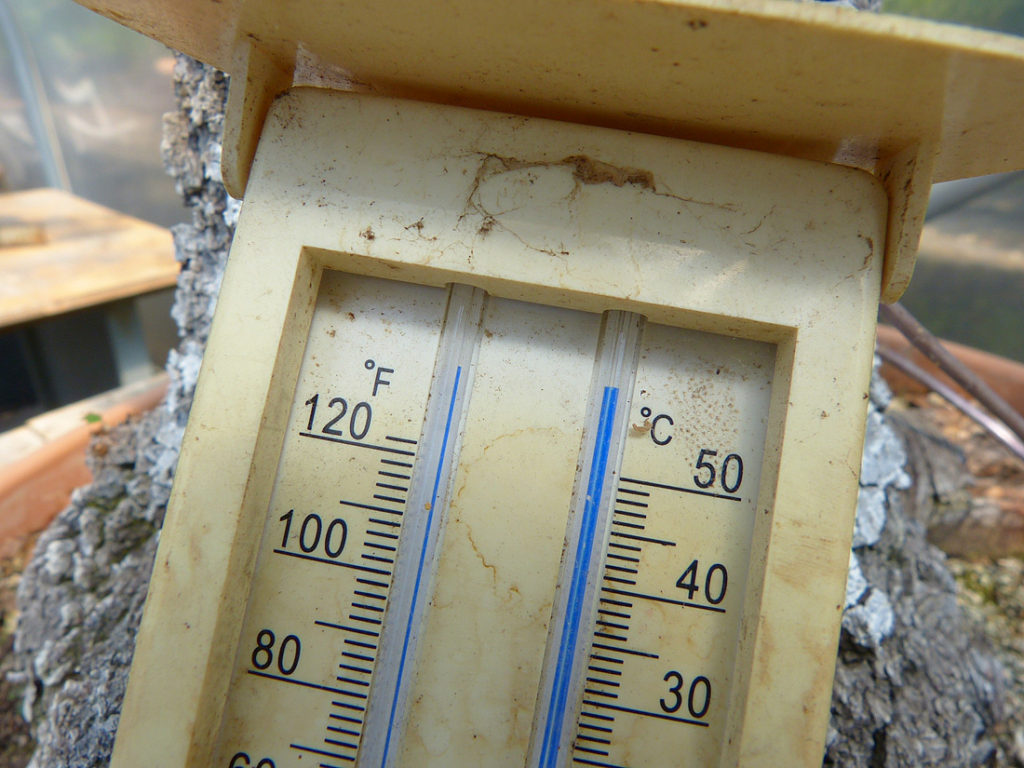 As people who keep bonsai, this time of year can become a bit tedious. Plants need regular ‘hydration’ and when it’s pleasantly warm our small pots do present a challenge. Most of the time in the UK a good watering once a day is perfectly adequate. However during sustained warm conditions trees will often dry just that bit too much. At this time of year it’s advantageous to water twice a day (four times a day in my greenhouse), once early in the day and then again in late afternoon. Around here I water at 9am and 6pm. the morning watering seems a bit pointless as trees are still damp from the previous evening. The significant point is that damp soil absorbs moisture more readily than if it is very dry. Watering twice daily is actually faster because the damp soil will absorb more water much faster meaning less soak time and no need to come back over a very dry pot multiple times. This will give your bonsai an easier ride by providing, as far as is possible, an even and stable condition with good cooling water supply all day. You will actually be using a lot less water too with this method because there will be less run off. That is important if you are having to hump watering cans because you are suffering a hose pipe ban. Obviously come cooler conditions things change again.

Talking of hose pipe bans I saw that some authorities are losing up to 25% of their water due to leaks. My Dad spent thirty five years working for British Gas on large distribution mains and by and large they didn’t lose anything. If the gas folk can do that I think it’s about time we put a size 10 up the water authorities don’t you? I went out of my way to buy a property with a water well. Come the day the drought Nazi’s knock on my door I have a convenient place to put them.

To sum up, don’t get hot in the sun, don’t let your skin sloth off, don’t wear winter clothes, don’t put your bear ass on a hot plastic chair that has been in the sun all day and do keep those trees hydrated. Sound, sensible advice bought to you by Kaizen Bonsai!

*Perhaps the BBC is “Impartial, free and fair”.