The Story of A Dog & Two Tools

Ever since I was a toddler I have been something of a loner, definitely NOT what you would call a team player. Most of my early years in bonsai were spent entirely on my own, no mates, no bonsai clubs and nobody pointing me in the right direction. The net result was a whole host of bad experiences. I can confidently state I know a thousand ways to fail at creating bonsai trees. It took me ten years to even start to figure out what I was doing, some would say I haven’t figured it out yet but I never really bothered about what other folk thought.I know when I did a good job and come the day I actually do achieve my best work it’ll be the last bonsai work I ever do since I have no interest in going around in circles.

When we start out we all make some ugly trees. Most of mine died, some I killed and a few I took out to the woods and planted them there where nobody could see them. These days, because we move a lot of trees throughout the year I have a huge number of plants coming across my bench. We get a lot of waifs and strays, a lot of abuse victims and even a few terminal cases. My log burner always has plenty to eat and the composting bins are always full. I am never shy in administering a coup de gras (1. A deathblow delivered to end the misery of a mortally wounded victim.) However one of the things I particularly hate is having to make good on other peoples half work. There’s nothing I love more than a good clean stump but putting right something that has been tickled by someone else annoys me because most of the time it crimps my style, I don’t like to be told what to do.

Late last year I took delivery of a large number of trees from a European supplier. This particular tree is a prunus mahaleb, a superb variety entirely brilliant for training as bonsai in Britain as it’s ability to withstand shit weather and abuse is legendary. Nothing seems to get the better of this brute other than a chip storm created by a bonsai guy with a Makita. I can’t blame the guy who worked this tree he’s just doing what he was told by his boss but I can’t say the work increased the commercial viability of the tree. The trouble is bonsai takes and age to produce and quality work takes time and that costs money which nobody want’s to part with. As a result we either get very beautiful and expensive Japanese bonsai or this sort of ‘rough’ stump work. Having parted with my hard earned in exchange for this bit of badness it became very obvious i was going to have to dig deep in order to salvage what was left and I wouldn’t be taking home a pay check that week. 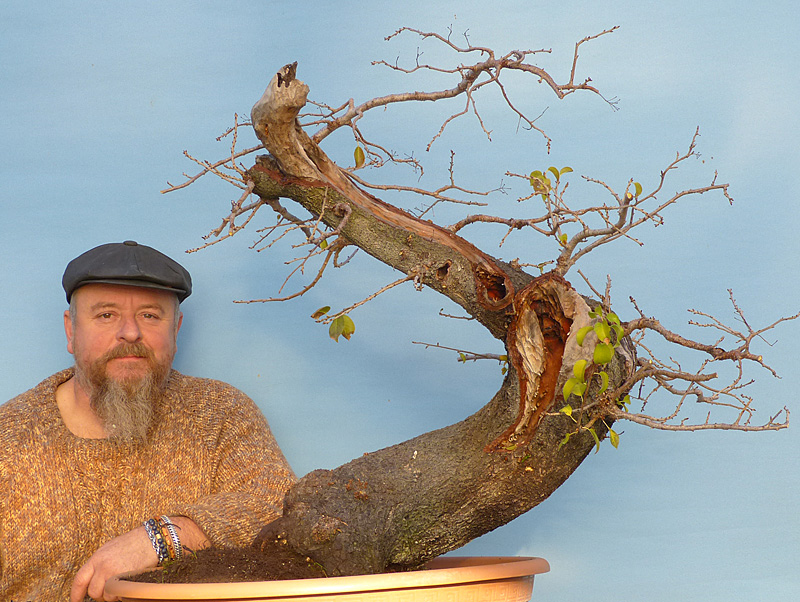 As it arrived, to say i was disappointed would be an understatement. Look closely!

There have been some stumps that have obviously been chewed out around the half way line. A straight line was run up the second half of the trunk where a big ugly lump was left. Several bits of poor technique with little hope of reconciling the whole. That’s the trouble with this type of hastily conceived work it often leaves us with worse problems than if it had not been done at all. The only way to progress is to build the tree one small step at a time. Piece by piece we can try to absorb the ugly and with patience, hopefully, we can heal the tree then, over time, as the tree grows and develops all can be well, if we’re lucky.

The first thing to hate is the haphazard ramblings of a carving tool. NEVER put a carving tool on a tree unless you are entirely aware of what it is you want to make. The inherent nature of a carving bit is to tear everything to pieces, just ‘following the tool’ will wreck your tree and everyone will instantly know it took two tools to make that mess. With a really big tree like this prunus you have a great opportunity to do something good. That trunk is a foot thick, carving a half inch up the front looks lazy, ill conceived amateurish and on a good day, SHIT. Carving has to belong to a tree, not look like we did it with a magic marker. Carving a big trunk and achieving a deep well connected and beautifully shaped hollow takes a lot of time, a lot of tools and a lot of skill and if it’s done right nobody will suspect it’s not natural, at least not after a few years. That type of work is all about light and shadows and making that work means some deep holes. From the half way point downwards the trunk is now entirely hollow and light breaks through in several places and all told that took about eight hours and filled my industrial vacuum cleaners bin three times. 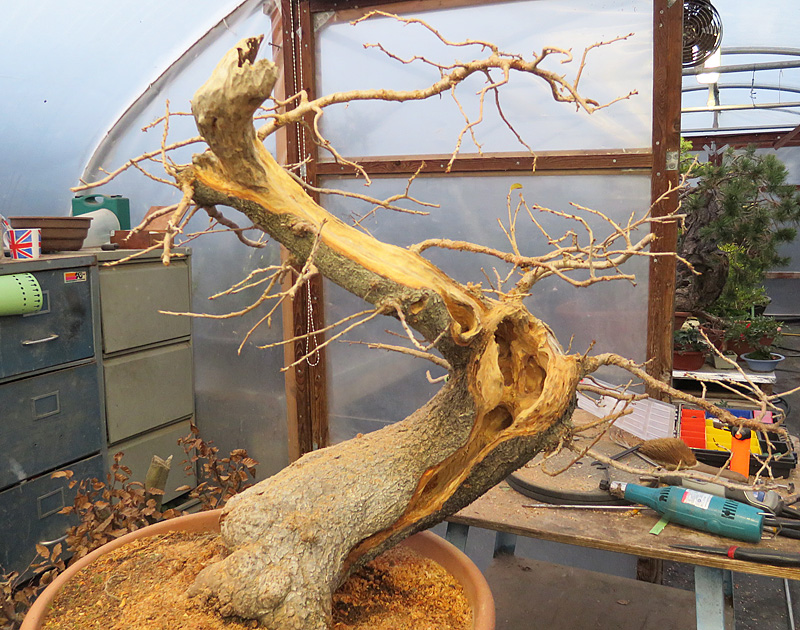 The lower half of the trunk conceals most of the work completed here but in the flesh it bings a little fizz to the tree.

Sadly there was nothing i could do with that long straight piece in the upper part, there was nothing left for me to use so all I could do was lighten it up and clean it nicely. At the top we have that ugly knuckle and that can be fixed. However due to some suspect material preparation in the past there’s a whole ‘Medusa’ thing going on behind that ugly fat slug of wood. Everything’s in the wrong place and the ugly’s knee deep. 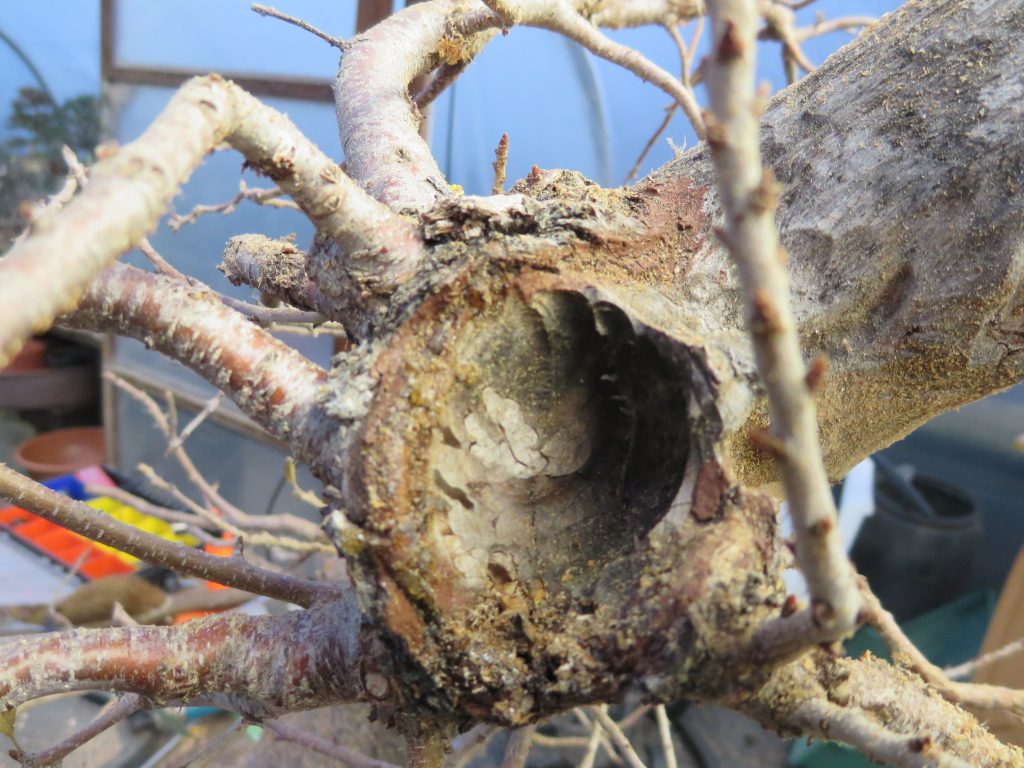 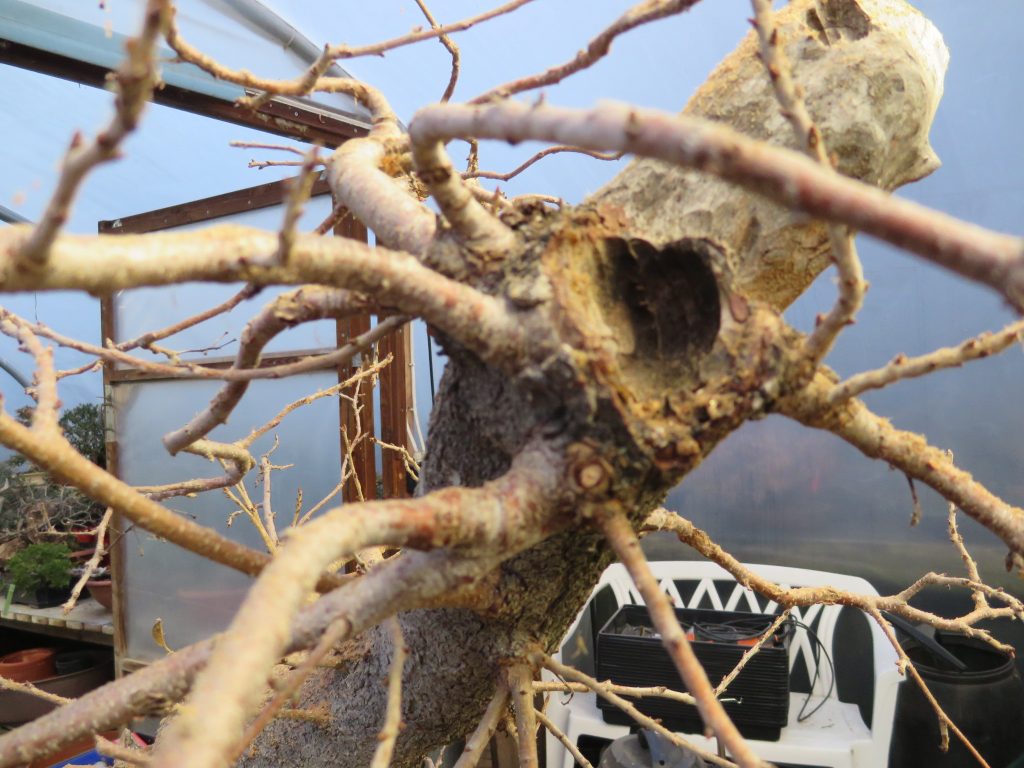 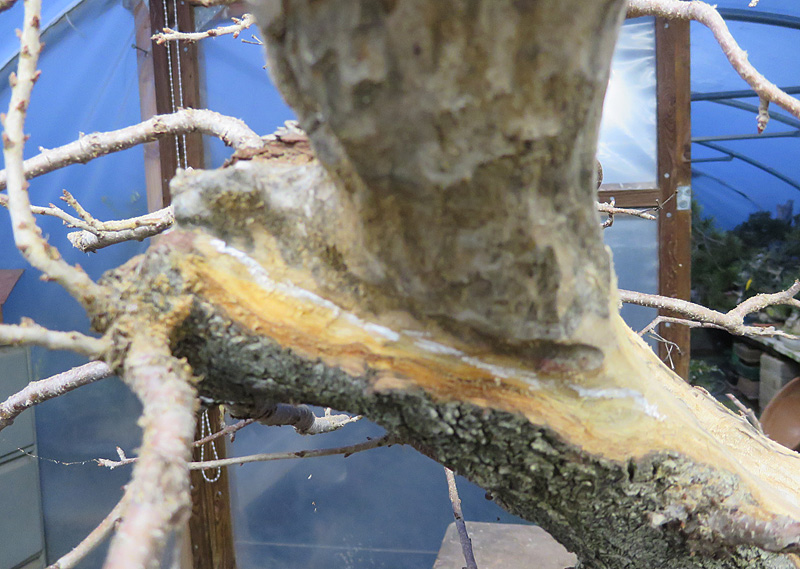 This chalk line’ll fix it. 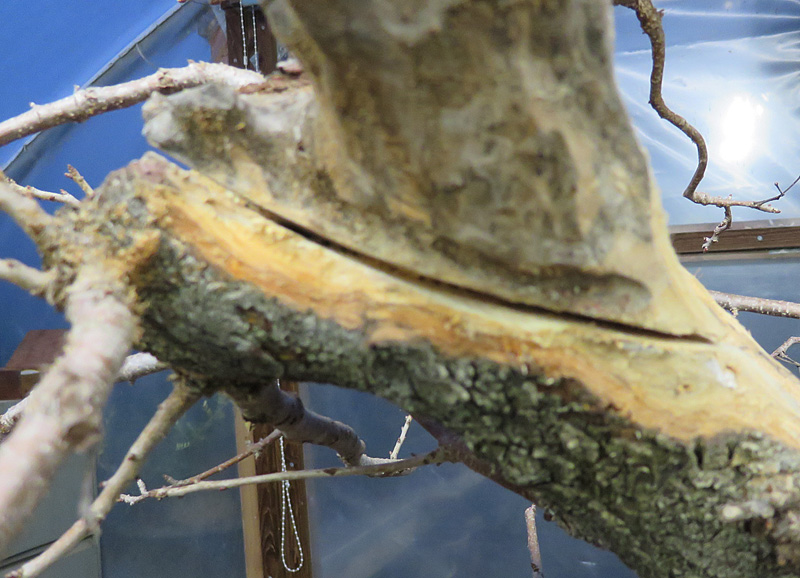 Splitting this bit off the main trunk enables us to improve the movement and taper. It’s not much but it’ll help. 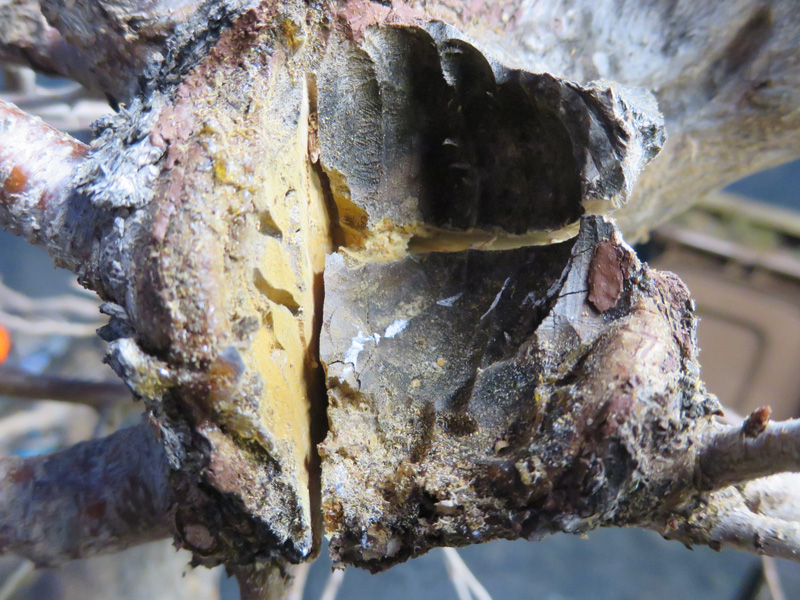 With the saw cuts in place I just have to remove the inner wood before pulling that lower corner into place. 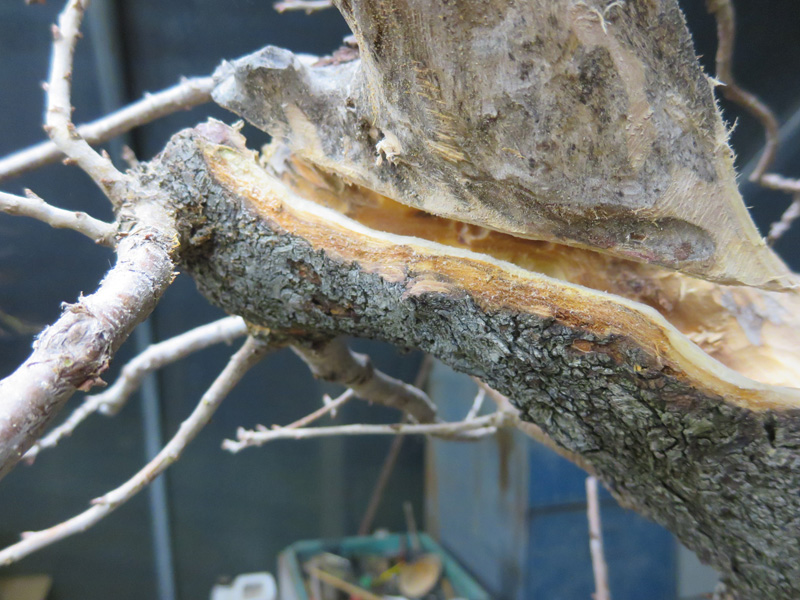 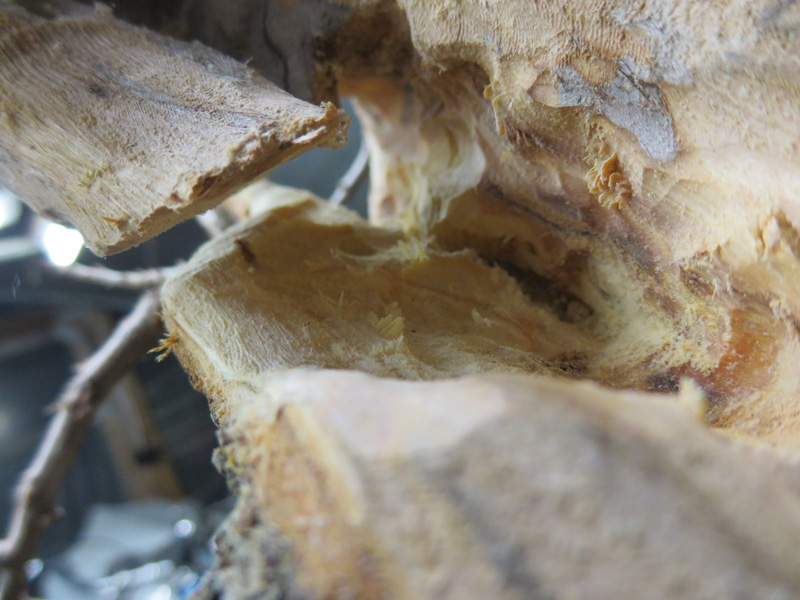 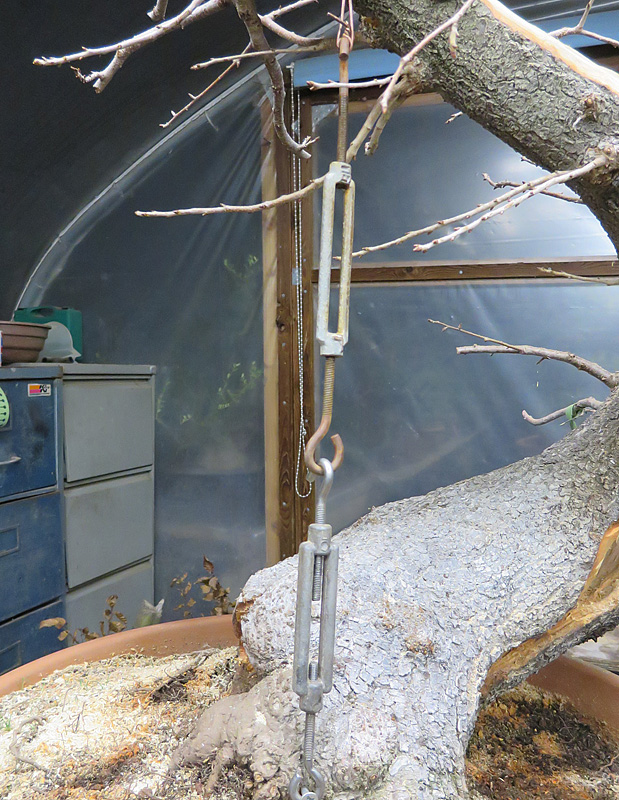 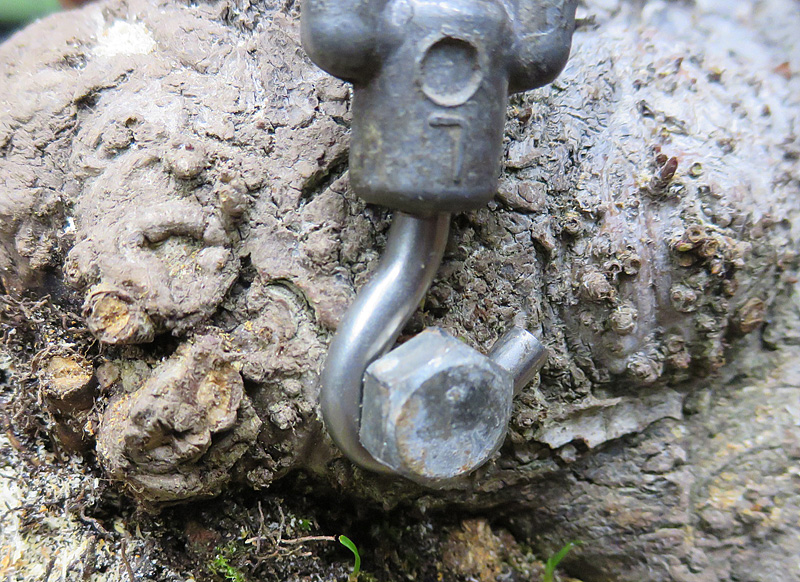 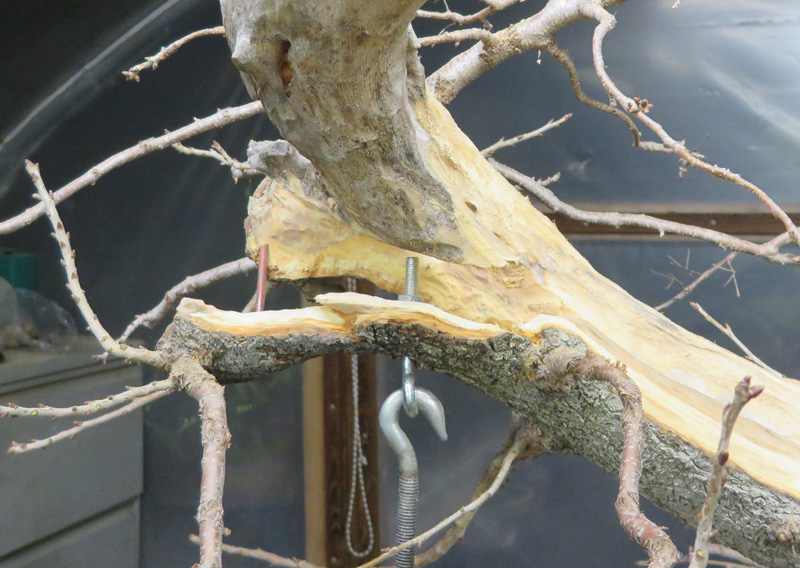 It took a while to set this up but once the live bit was pulled away from the main trunk I was free to get rid of a bunch of superfluous wood. I thinned out the banana at the top before going off sick for a month from the strain. I still think that lump needs work but will see how it goes. With some ugly wire and a bit of rough texturing on the surface wood i think this tree is showing a little more promise than it did. Hopefully a summers growth will heal it further. For sure I will never see my two days work come back to me but that’s compensated for by the warm fuzzy feeling of having helped this tree back from the brink. After all we do this for the love of it, don’t we? 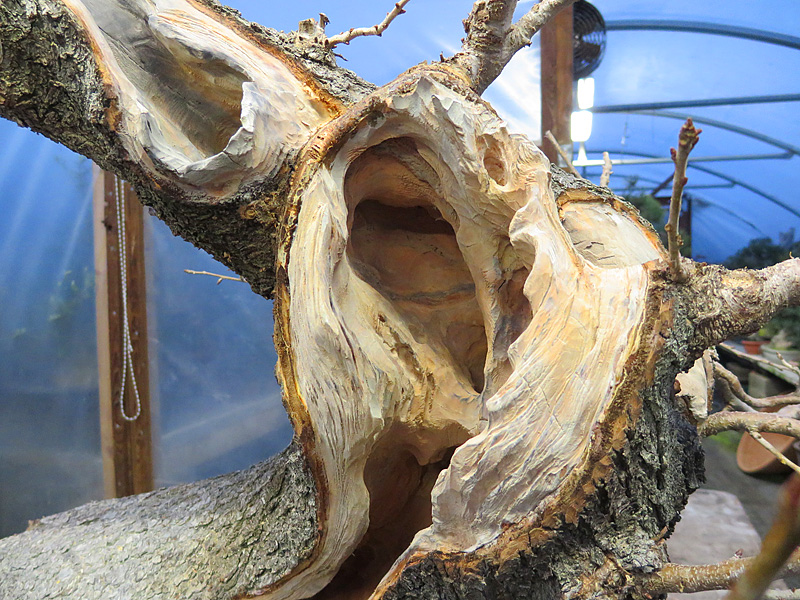 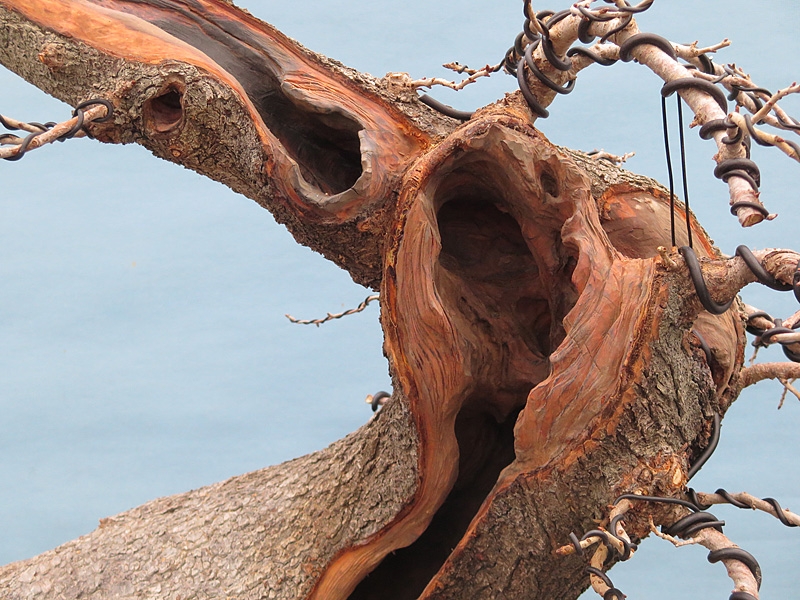 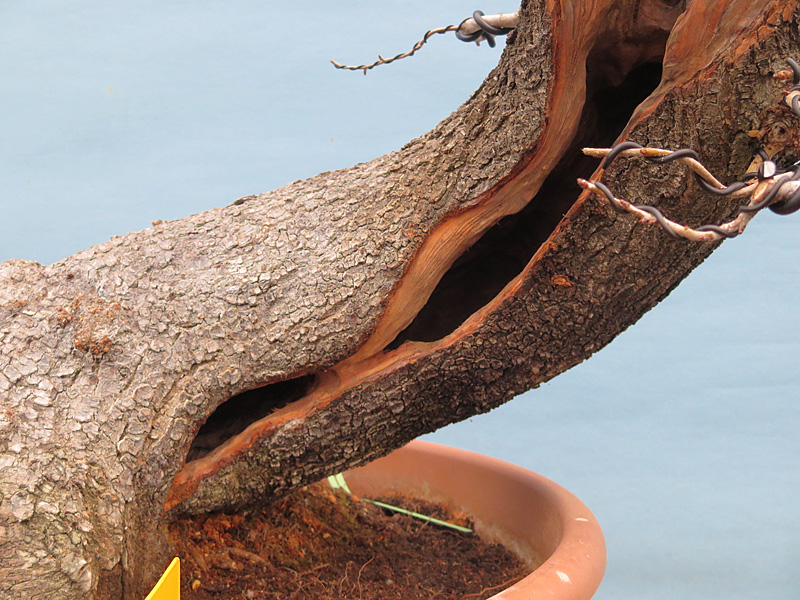 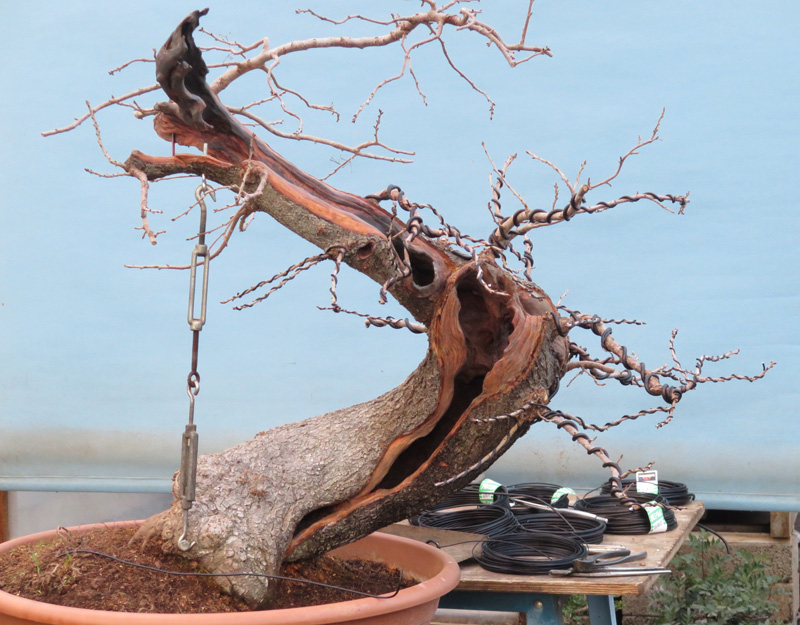 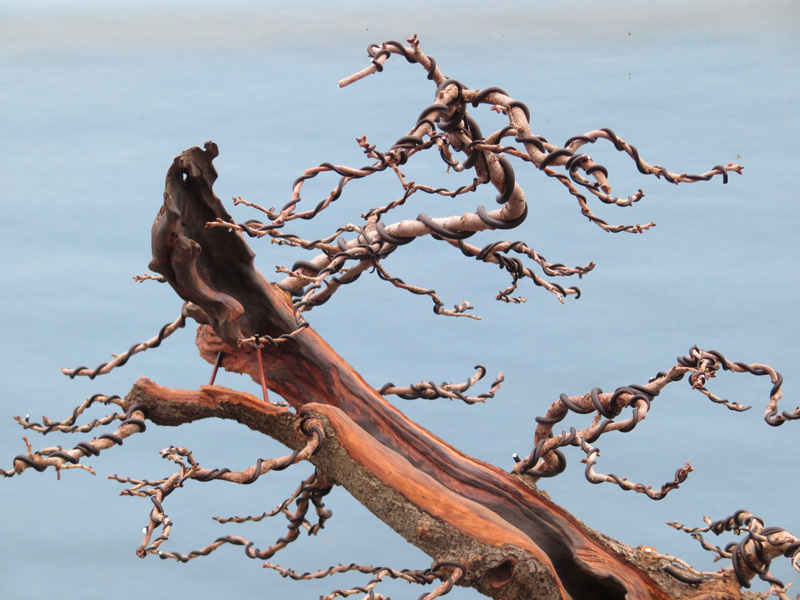 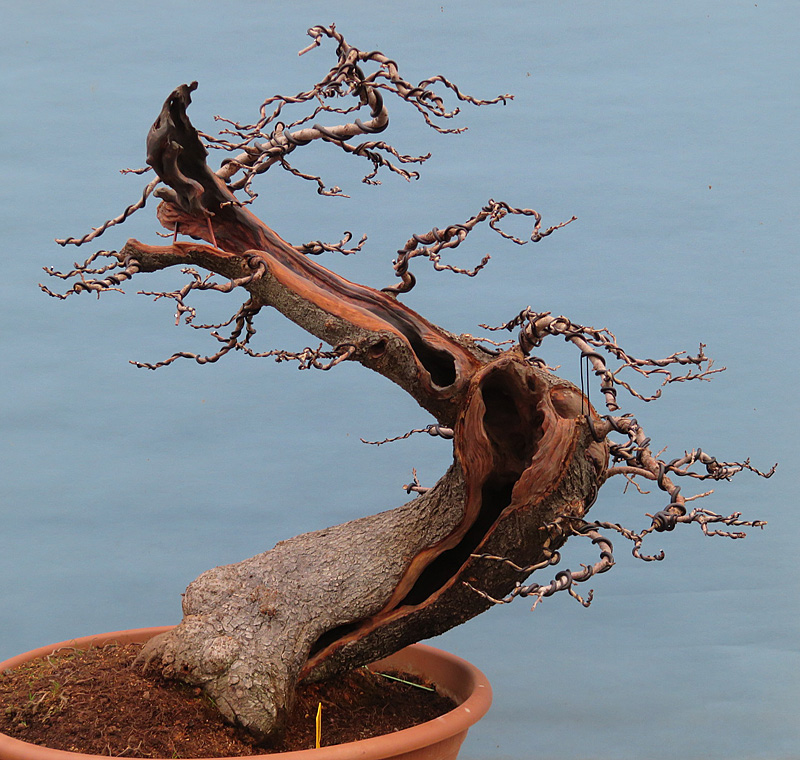