A Quickie Up the Tunnel

It’s officially the shortest day today. I HATE this time of year with a passion, the cold, the wet and above all the dark, I really struggle to keep myself going at this time of year. The idea of drinking a whole jar of ‘shine’ and laying out on the freezing grass in my kecks until it’s all over often crosses my mind. However at 4.27pm today the year clicks over and the days begin getting longer. Maudlin aside there are folk that depend upon me so as my parents say ‘must get on‘.

Being as it is Christmas and all I thought I would share a secret I learned many years ago. It’s served me well and put money in my pocket. In some circles bonsai is something of a competitive sport. The drive to own a perfect tree and a better one than our peers is strong in many people, bonsai is a game of one-upmanship to those folk. Go to any bonsai selling event or nursery sale and as the doors open see what I mean. My opinion of that is to wonder why folk are so keen to own somebody else’s bonsai work. In the motorcycle world there is a t-shirt around that states “It’s not about what you can buy, it’s about what you can build”. In reality just splashing some cash isn’t that hard. With the right motivation anyone can get off the sofa and earn money. However if you are going to make something truly worthwhile and valuable to both yourself and others, building it is the way to go. A quality, and unique, build brings satisfaction of a job well done, demonstrates hard learned skills and dedication as well as respect and possibly even a little envy from our peers. Any skill mastered has the ability to open up a path for us in life that just could leave the world at our feet. 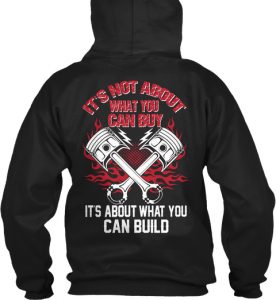 Take this message to heart, it could change your life.

That’s exactly how I ended up here. Nearly thirty years ago I started to keep bonsai. I had no money but just worked as hard as i could with crap, stumps and skip rats and after ten years as my skills got better so did my trees, strange that. A family friend who had done well in life imparted a simple gem of wisdom too me as a teenager that I hold as invaluable today and has been a guiding principle of my life. – “Use what you’ve got to get what you want”. I had a couple of broken down electric drills, a flexible drive shaft and some home made cutting bits and some absolutely crappy stumps i nicked off a demolition site. Not much of a start but a start none the less. 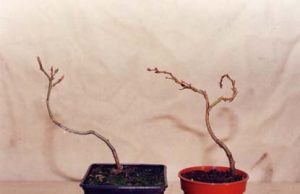 It didn’t take me long to realise my first “bonsai” material had it’s limitations. These were my very first bonsai and worthy of a photo!

Finding bonsai material is really easy, it’s literally everywhere even in horrible overcrowded Blighty. If you live in an urban area you have at your feet a massive variety of material in the gardens and parks around you and the scruffy sort of thing we need is easy to procure as the owners are usually keen to see the back of such things. I have been paid by property owners to remove some superb material. If however you are too old, infirm or bone idle to go out and find what you need there are plenty of folk happy to sell you such things including us. Whenever I put something a bit special on our web site it creates an almost instant response and will often sell in minutes. However our web site, and nursery are full to the rafters of what some might consider ‘crap’. That only serves to show how little some folk know. Because of how I started all this malarkey I still love a nice big stump more than just about any material I have, they are often a blank slate for our creativity. Remember, this is about what YOU can build and the process of creating bonsai is a building project just like a house, a car, a bike or any other complex entity.

Most folk go out of their way to avoid procuring trees with big pruning scars. As a general rule I go out to find those trees on purpose, the price is always better. All that’s required is to hollow out those big cuts and folk will fight to own the results. A scar is just that, a big shady hollow is an attractive feature that draws the eye and can be developed as a focal point of an otherwise sub standard bonsai. Trees where I live are very big, fat and the oldest ones are ALWAYS hollow and who doesn’t love the mystery of a deep dark hole? 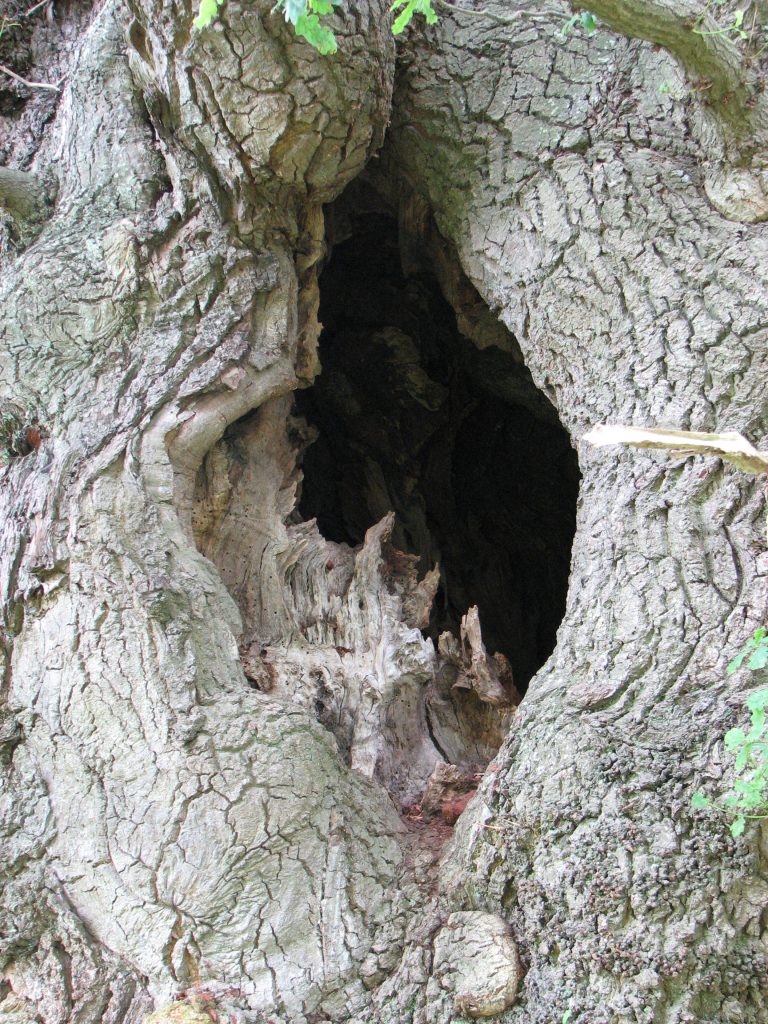 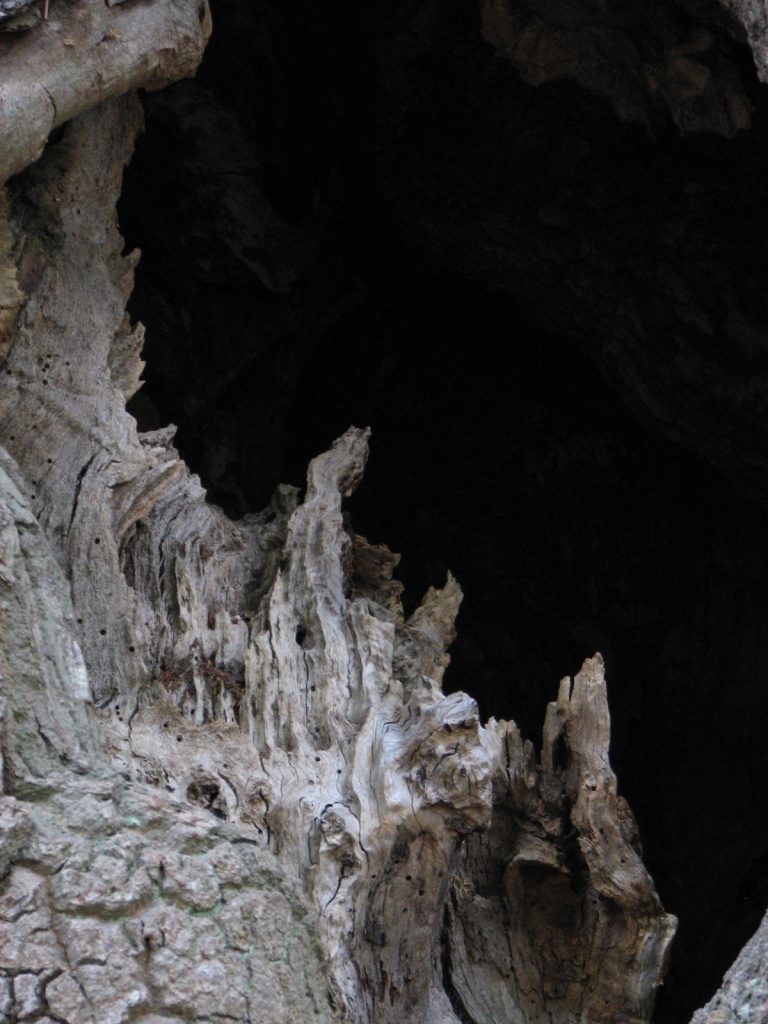 Last week this thumping great hornbeam turned up. I love hornbeam, a much underrated British native. It was a bit sad that that massive cut had been shaved down flush. Did someone really think it would heal over? This did limit my options somewhat but you have to make the most of what you have at hand. Carving took an hour as did the wiring and as hornbeam bend like they were make of French cheese some gnarly branch lines a easily achieved. Give the work a couple of years to mature and this tree will have doubled in merit and value. SIMPLES! 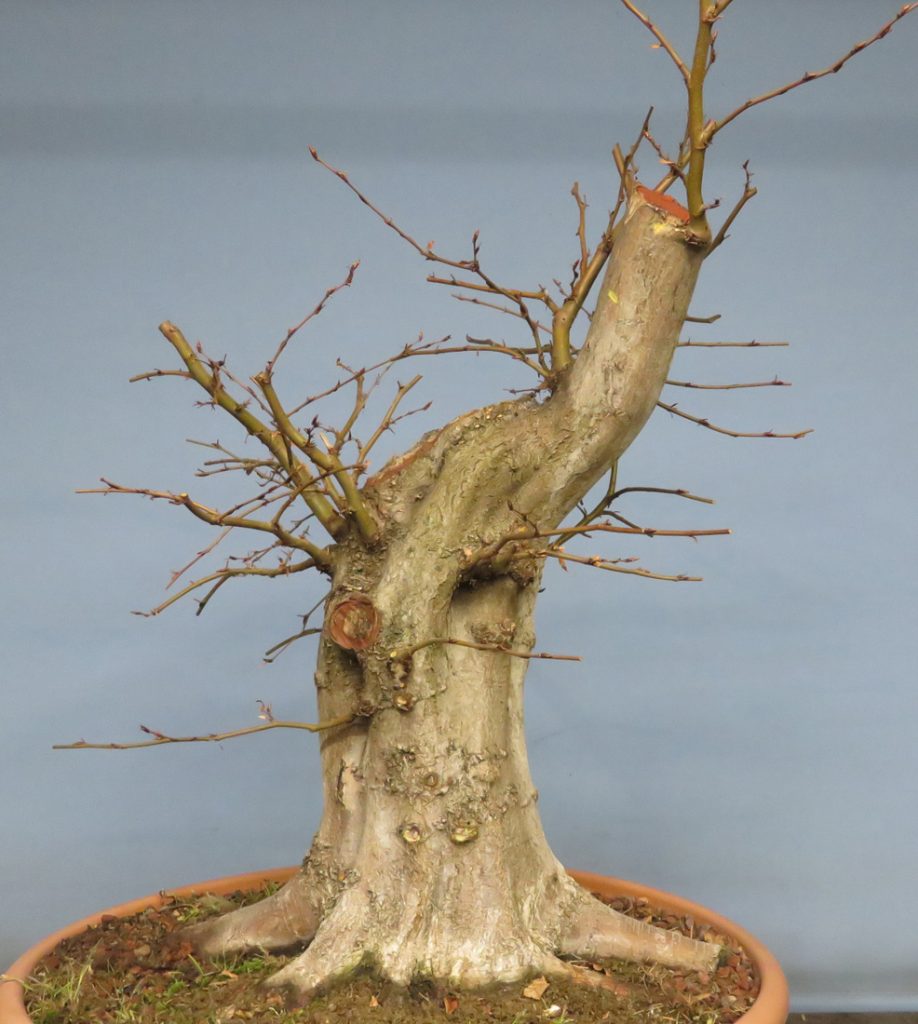 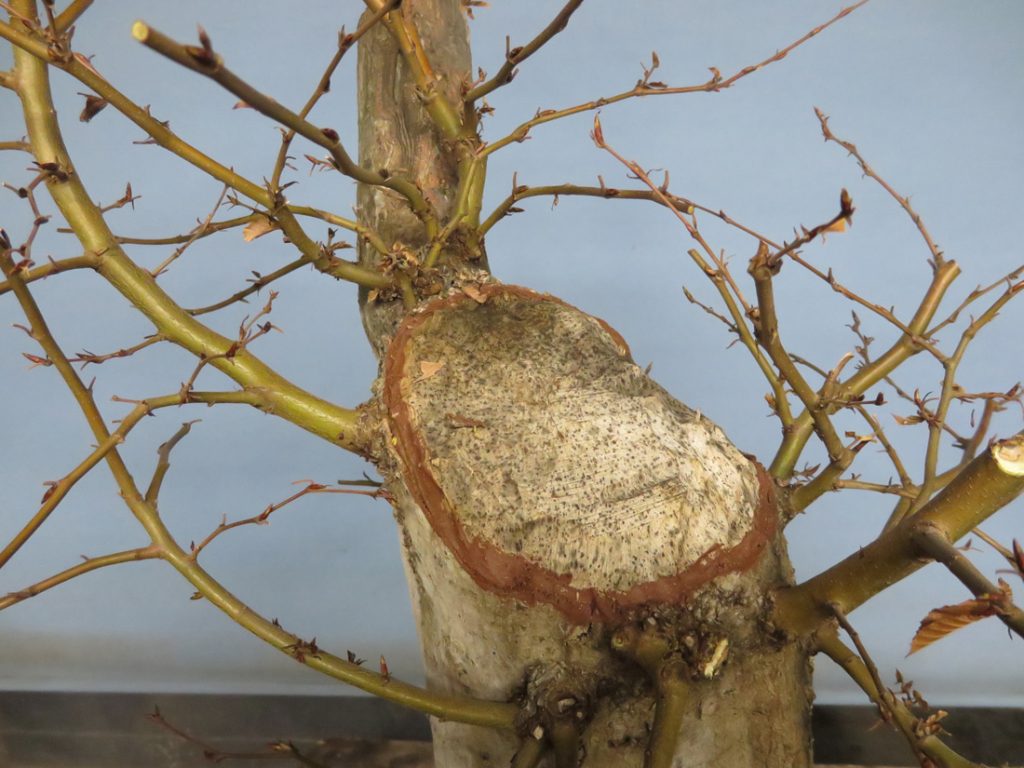 Elephant in the room? Who thought this was a good idea? Nice red wound sealant. 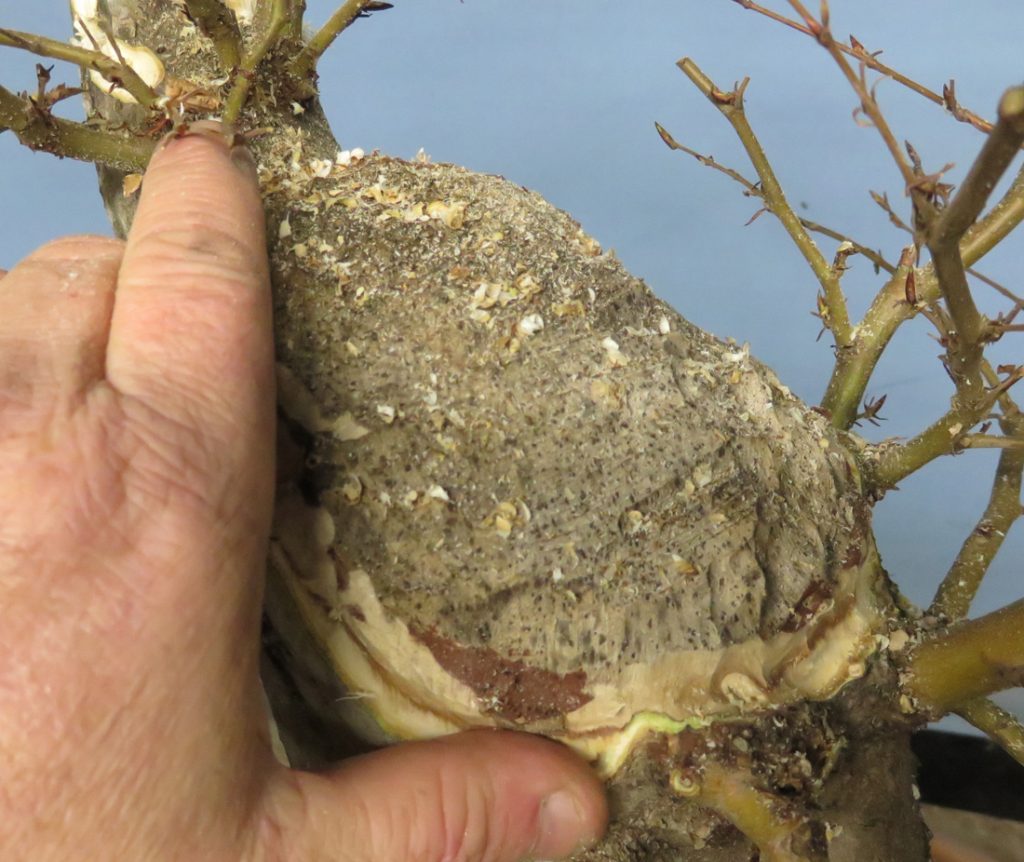 A good stump here would have helped a lot. 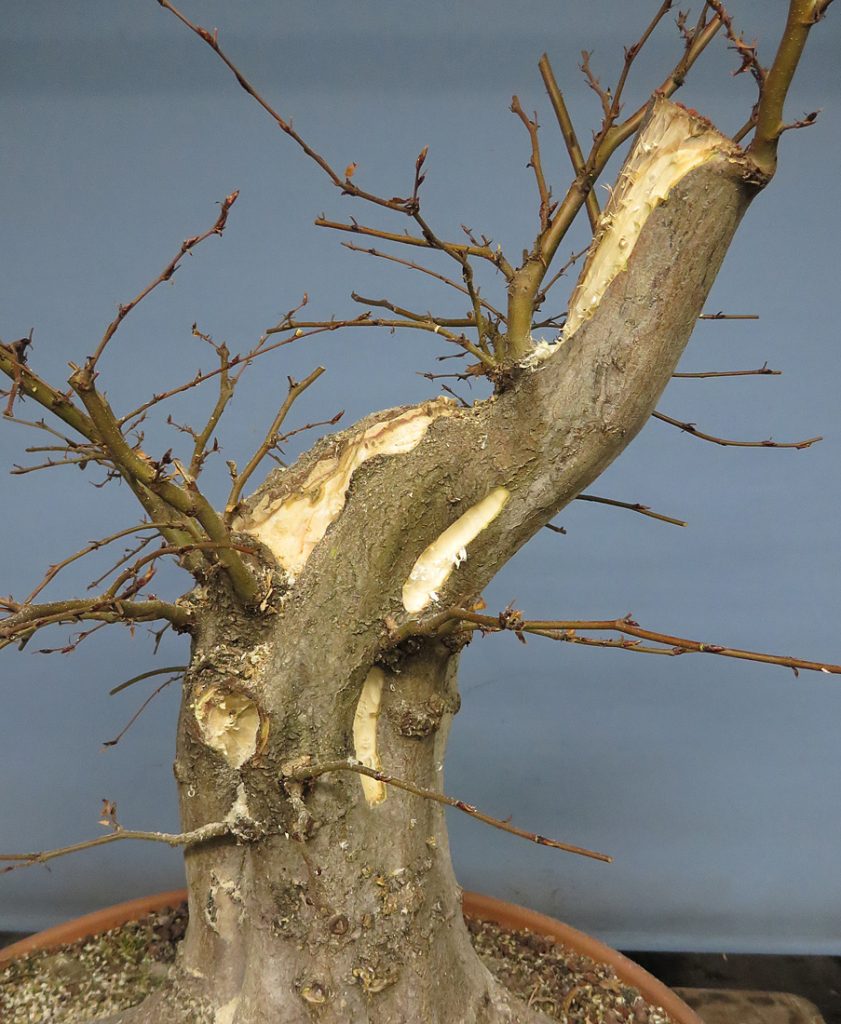 Bark removed prior to hollowing. Always keep in mind how future callous tissue will develop. This can really add some magic. 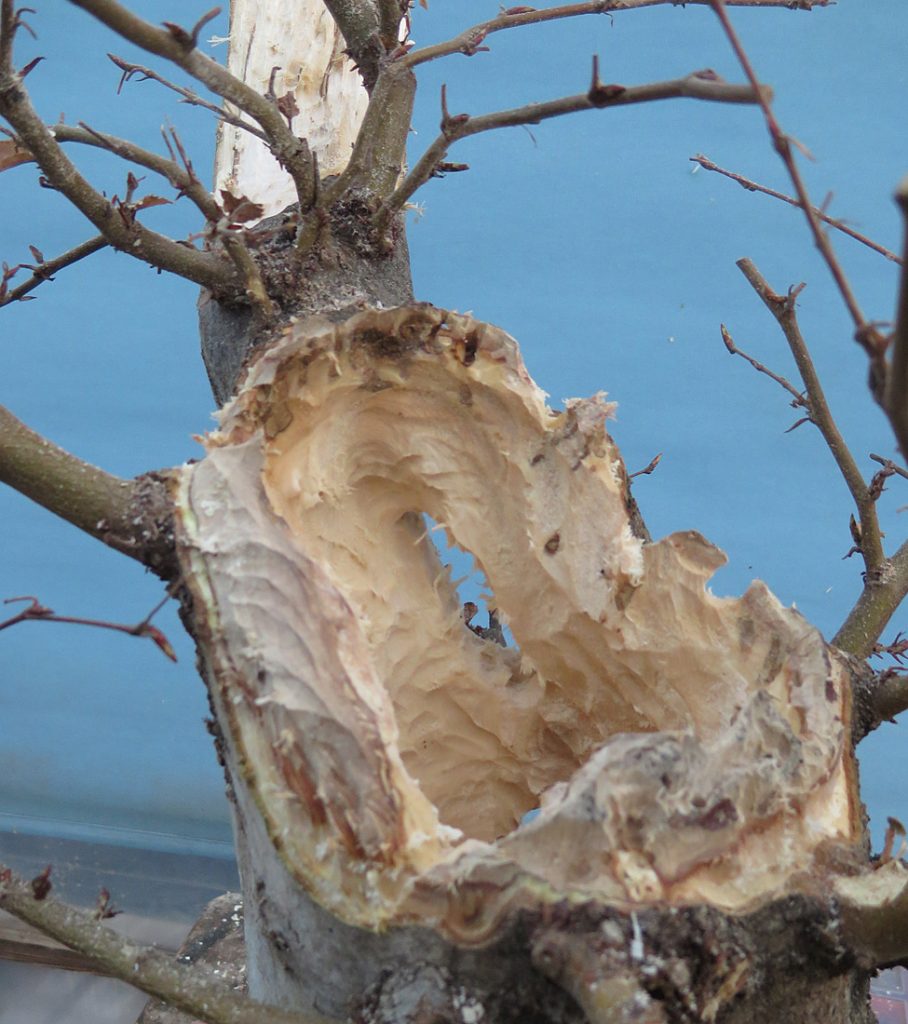 Big holes look good if they are connected by small ‘windows’ from other areas. 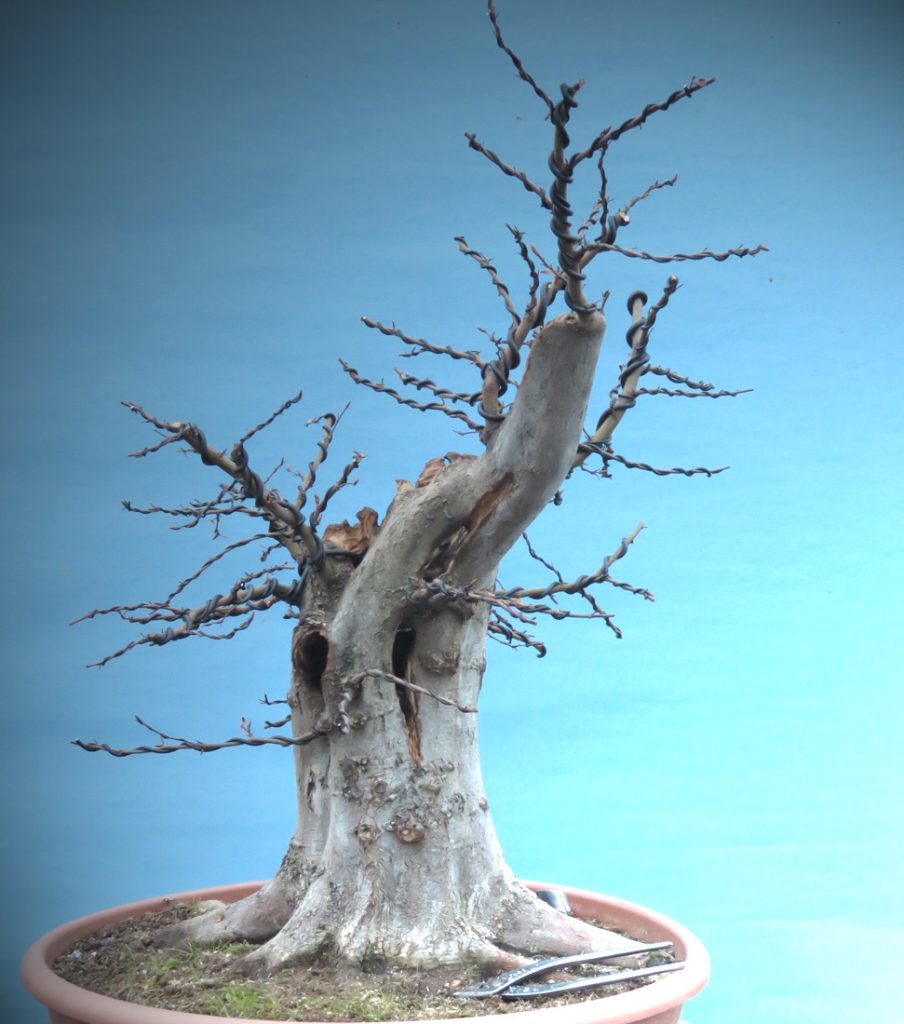 A bit of wire. 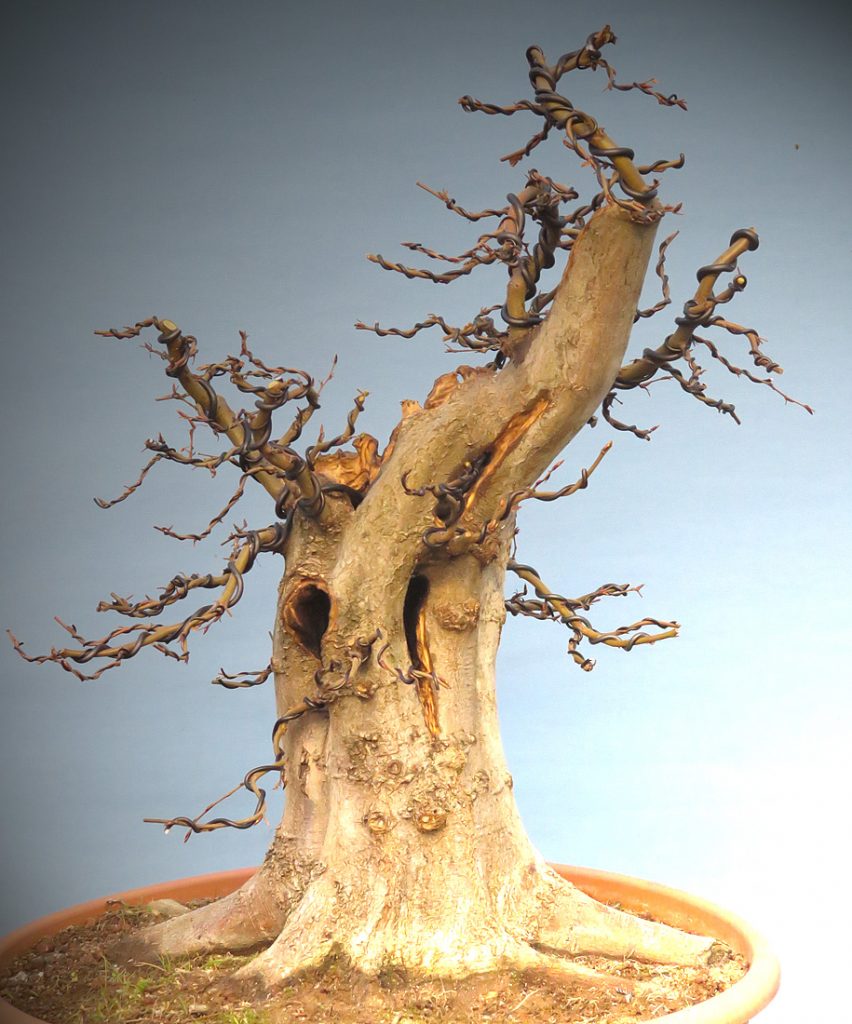