Over the years I have learned that in order to be successful at anything in life one has to be prepared to master any number of peripheral skills. Simply grasping the intended skill is rarely enough to ensure success. Where bonsai is concerned I have always found one of the most important factors to have at hand is an open mind. Over the years I have seen countless folk fail at cultivating bonsai simply because they refused to let go of an outmoded idea. The things we learn in the first weeks and months have a habit of becoming deeply ingrained in our psyche. The trouble is that without the benefit of experience to guide us, what we pick up is often poor, irrelevant, out of date or even simply erroneous. Later on down the road, with a few good seasons under our belt, it’s much easier to weed out the BS but with the modern issue of information overload I spend a lot of time every week helping folk experience a moment of clarity. Bonsai is NOT learnt by reading a screen but outside in the sunshine (and the rain) learning to read trees. There are infinite variables within the cultivation of bonsai trees, two identical examples of the same species standing on the same bench side by side may require a different care regimen to achieve best results. Assuming that someone you don’t know and who’s credentials you cannot establish knows how to grow the trees in your garden is foolish, at the least. Just because someone has a huge following on social media does not make them qualified, or an expert in their chosen field. In my life I have discovered that the most skilled and knowledgeable people are almost impossible to find but idiots are pretty much a dime a dozen.

Keeping an open mind and being prepared to change is a vital aspect of success with bonsai. Just this week I entrusted a very valuable olive to my long time mentor Kevin Willson. The tree has been here for nearly 10 years but there just never seemed to be the time to get it worked. In all those years I only ever considered one side of the tree as the ‘front’. When the olive returned to me it was the other way around, and looking good! I have to look with better eyes, i’m not about to try and turn the tree back the other way. My very first bonsai tree was a tropical (indoor) species that died within a few months. Who didn’t have one of those? However in my travels I have seen some stunning indoor bonsai cultivated by more skilled folk than I. Maybe I am missing out? There are countless examples of how our experiences dicate our opinions and actions but often with little more than a change of mind a whole new world of interest can often roll out beneath our feet.

Back when I started keeping bonsai trees I felt the foliage should be in ‘scale’ to the size of the tree, in retrospect that’s a ludicrous idea. I have since found out that thought pervades the minds of many beginners. We sell fifty Chinese elms to every one ficus, those new to bonsai always say the small leaves of elm is the main reason for their preference. Even though a ficus is much more suitable for cultivation inside the modern warm dry home it remains unpopular compared to small leaved varieties that, in general, most people struggle to keep alive. Ficus are a wonderful species to work with and very hard to kill so why shun the species in favour of something like serissa which is almost guaranteed to end up in the trash. A change of mind can almost guarantee success and present a life long path of fascination and distraction.

This idea also extends to ‘outdoor’ trees and many species remain unpopular because of their leaf form. However there are some spectacular species that make beautiful bonsai and grow fast, which is important for beginners. We keep thousands of trees on our nursery, often we don’t have much of a say in what arrives here, for instance when we buy a collection. I have come to the conclusion that to expect our trees to look amazing all of the time is simply ignorant, every different species has it’s moment of glory. For instance Japanese maples look poor when in full leaf during summer but in winter when they are bare or early spring as the new growth flushes look spectacular. Similarly a satsuki completely obscured by big blousy flowers looks a bit daft but at the moment the first few flowers pop they are beautiful. A Turkey oak looks a bit like an unmade bed in summer but in winter can be very beautiful with a combination of gnarly twisted trunk and branches and dense ramification. That brings me neatly to the subject at hand….

There can’t be many folk in bonsai that are not familiar with crab apples. The genus Malus belongs to the rose family (Rosaceae) and broadly includes the domesticated apples (m. Pumila) we are all very familiar with (6000+ cultivars) as well as what are loosely called ‘wild’ apples. In the UK and much of Europe our native apple is Malus sylvestris, <an example here>. Wild apple are often referred to as “crab apples” which is a term that bothered me for a long time until one day I was walking through a small fragment of ancient woodland. In the gloaming I spotted something that kind of gave me the creeps, on getting closer I saw it was a crab apple tree and instantly knew where the name came from. Growing in the shade of huge hornbeam and oaks this little tree, about 8’ tall had done exactly what ancient crab apples do, developed long spreading branches that reached the ground, growing from a single trunk and with arches at the top the silhouette resembled a big spider crab.

Until recently decent crab apple trees for use in bonsai were hard to find. In over twenty years the largest example I found had a three inch diameter trunk. However over the last five years we have been lucky that much better material is becoming available and at a good price too. With the gradual demise of Japanese bonsai coming to the UK and the ever increasing cost,  finding good sustainable sources of suitable materials is increasingly important. There is also a massive move towards native species which, considering their ease of cultivation, can only be good for those wanting to enjoy cultivating bonsai. I have generally dismissed crab apples because of their big leaves and blousy flowers. However as their supply has increased in recent years I was forced to work with them more and more. I now consider the trees to be of considerably more value than I once thought. Living in the UK with our cool climate it’s tough to find species that develop quickly and that can deal with the ups and downs of our weather. I now believe the only thing simpler to grow than crab apple is turf.

Developing crab apple as bonsai is a simple job, partly because they grow so quickly, and partly because the tree is so adaptable. Kept in a larger than average pot a crab apple can be pruned three to five times over summer which will develop ramification quickly. The tree heals fast, can be wired in summer after leaf pruning or in winter and carves beautifully often being completely hollow. Once ramified the winter silhouette is beautiful and once old and mature few species can match a crab for cragginess. Autumn colour can be very impressive and whilst I don’t much like the flowers, what I do love is the scent of those floppy blooms. In winter the bare tree covered in red fruits is quite something to behold in the light of a cool crisp orange dawn or covered in frost. Sadly few mature examples of crab exist here in the UK, if you have one send me a picture, please.

As you may be able to tell I am slowly falling in love with our wild apple trees. At this moment in time there are some belters available at superb prices. Steeped in folklore crab apples were once an important element in the flora of our countryside and afforded a special place in mythology and symbolism. Watching a Fieldfare pulling apples off one of my trees on a cold and frosty morning last winter made me feel the trees belong here. Maybe it’s time to change our mind about crab apples?

P.S I may have listed a few on our web site recently 😉 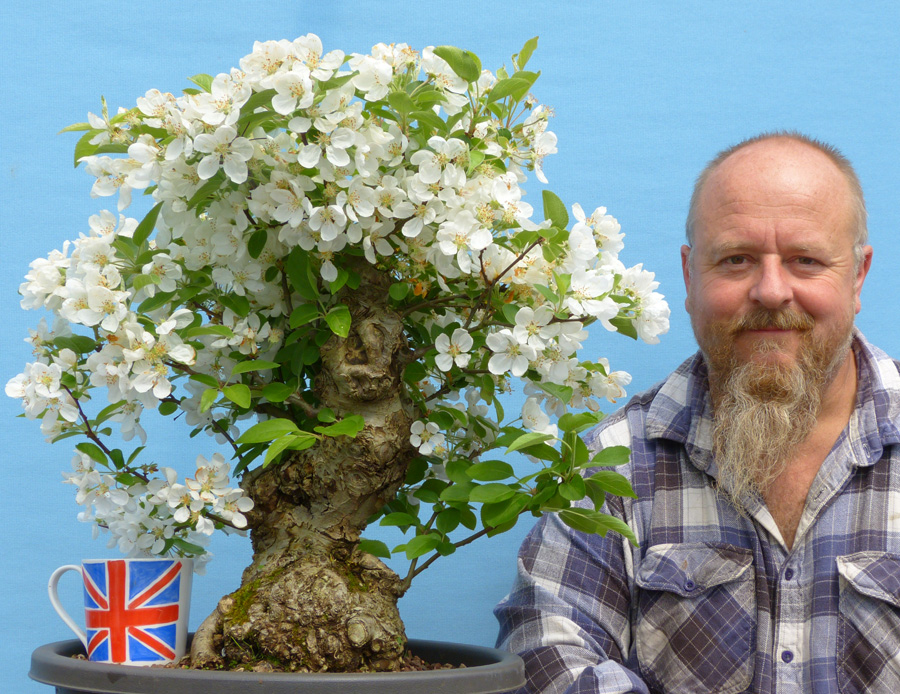 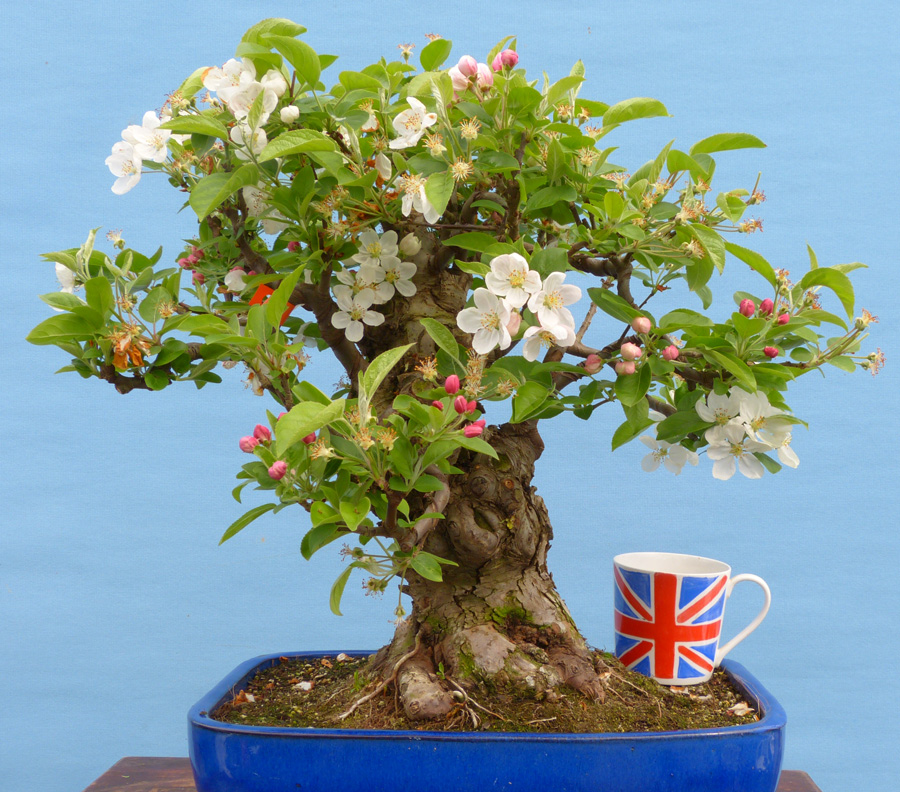 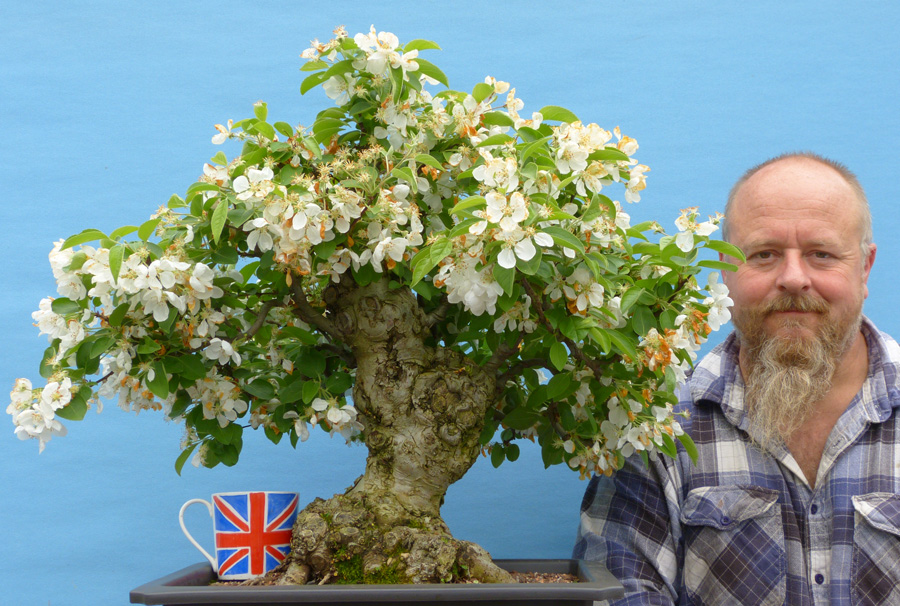 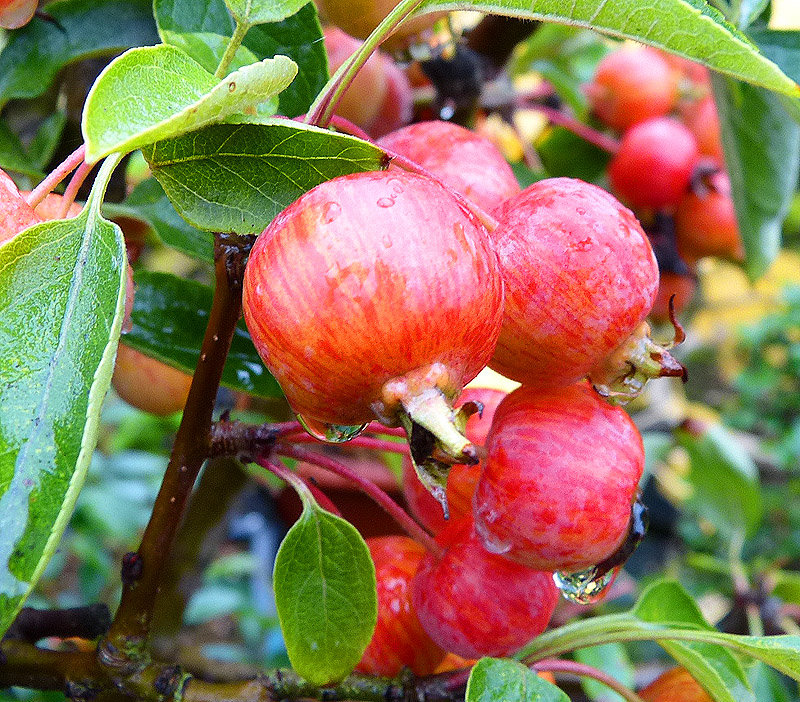 General
Nothing to do with Bonsai
Sabina Junipers First Work