The Light of Day

If you live outside the UK the following post might not be relevant to you, especially if you are lucky enough to live in a warm climate.

In my own head I am about as patriotic as it’s possible for a guy to be. Unlike certain ignorant beardy weirdy political figures I will stand up and sing our national anthem with pride. I love what my country is and what it stands for and will fight to the death those that seek to bring us down. One of the things I love about us (Brits’) is the spectacular fashion in which we embrace mediocrity. Modern Britain is no place for extreme views, plain speaking or being too good at anything. Over the past two hundred years Britain has given the world some of it’s most significant technological advances right from the steam engine to the most advanced semiconductors. We come up with incredible advances in every field and then, by and large, lose interest and go do something else. Unlike the Americans who manage to monetize everything in every conceivable way and produce unprecedented wealth as a result we daft Brits’ just give our stuff away to the world (says me sitting here writing this for free). The action avoids the awkward situation of having to ask for money which is always a little hard for us. It also avoids the problem of having too much money because that what would we do with it, we hate a show of wealth and as soon as a person or company amasses too much we turn on them in pretty short order (Tesco?). We love to back the underdog so long as he does not end up doing ‘too’ well. I noticed during my time in America they love a winner, everyone will back a success and want to be a part and share in the glory. Brits love to get close but not too close because it saves all the embarrassment of having to stand in the lime light being the focus of attention. Success is good but too much is vulgar. There is a certain comfort in mediocrity that we revel in and are proud of, we are good at being average and are proud of the fact.

Another thing about Britain that is mediocre is the weather. It’s never cold, it’s never hot, it’s often wet but not too wet (like a monsoon kind of wet). There is not usually much difference between spring summer or autumn. The winter is a little colder and very dark. Considering we are on the same longitude as Goose Bay, Canada which is a “borderline subarctic climate” experiencing close to 170″ of snow a year and an average temperature of -5 Celsius I guess our weather is pretty good. However consider this, Goose Bay gets 10% more sunshine than us which brings me to my point….

If you grow bonsai the weather plays a vital role. If you can’t rely on the weather you never know where you are going to be at any given time. Many years we bust our humps to get trees ready for the summer growth period and put in endless hours to set up our plants for a big leap forwards and then, like this year, summer entirely passes us by. This year there was a week of real nice sunshine in June where, even here on the coast, we saw 30 degrees. The following week we had single figures. The spring was nearly two months later that the previous year and August was again  back to single figure temperatures and days on end of cloud locked skies. This year I managed as much growth in the entire season as my friend in Spain achieved in 10 days. Where I can grow an average of 12″ on a tree outside he can grow 12′. The logical conclusion is to give up and go fishing but as a Brit I am a sucker for a lost cause.

Our lack of warmth, summer sunshine and light just highlights the need for exemplary horticulture. It’s a mistaken belief that plants get their energy from the soil, probably bought about by calling fertilizer “plant food” which it’s most definitely not. Plants ONLY get their energy from the sun, a lack of good light weakens a plant severely. In the UK plants compensate to some degree by making more chlorophyll thus plants appear greener than their southern cousins and probably gave rise to the collocation “England’s green & pleasant land”. We need light for plants to make energy and when it’s warm that traverses the plant structure faster and cell division happens much more rapidly. More rapid growth means bonsai trees improving in quality much faster and seeing as none of us are getting any younger that can only be a good thing.

So, we need good horticultural technique. We need a larger root mass compared to growers from sunnier climes, a bigger pot works wonders every time.

We need good soil quality designed specifically for our weather conditions and selected to suit the needs of the plant as well as the type of growth we are looking for.

We need to control the moisture content of the rhizosphere in order to maintain oxygen levels and temperature. This may mean protecting a plant from excess rain, even in summer.

We need a good steady supply of nutrients in the form of fertiliser. The daily needs of a growing plant are best served using an organic product like Green Dream Original.

And finally we need a strong source of direct sunlight and if you live where I do that’s a problem. Put simply light intensity is measured in LUX. Even on a clear sunny day here in blighty the light intensity can be half of what it might be in Spain and it’s ilk. At either end of the ‘summer’ light can be in pretty sort supply. We don’t really notice the difference but our plants do. Just a pane of clear glass can cut down light by 50%. To the human eye it looks the same but not to your green friends. Half the light means half the photosynthesis which means half the growth. So, more light is better. The problem is just how to increase the light a plant gets without bringing the national grid to it’s knees.

There is an ever increasing section of society that has this problem licked but our plants are in general not worth what theirs are and justifying electric lighting is tough for bonsai growers. However there is one element our growing compadres use that we can employ at very little cost.

This week I had to empty the poly tunnel in the process of cleaning up and moving trees into their winter quarters (a month sooner than normal). In doing so I took the opportunity to cover our benches. I have been using this silver foil insulation product now for a couple of years with excellent results. The benefits are significant. Firstly it increases light around the plants by up to 50%, I know I measured it with my light meter. Secondly it keeps the wooden benches dry thus preserving them indefinitely and finally it stops all the crap falling through and seeing as I have thousands of pots under my benches saves a very tedious clearing up job every few months. Over time the light transmission benefits do reduce but even after a year or two it’s still making a difference. It only cost about £70 to do all the benches in our 70′ tunnel so the average 8’x 10′ will only cost a few pennies. Well worth the effort and a little leg up for your bonsai that need all the help they can get.

I bought the foil product in B&Q for £8 a roll. 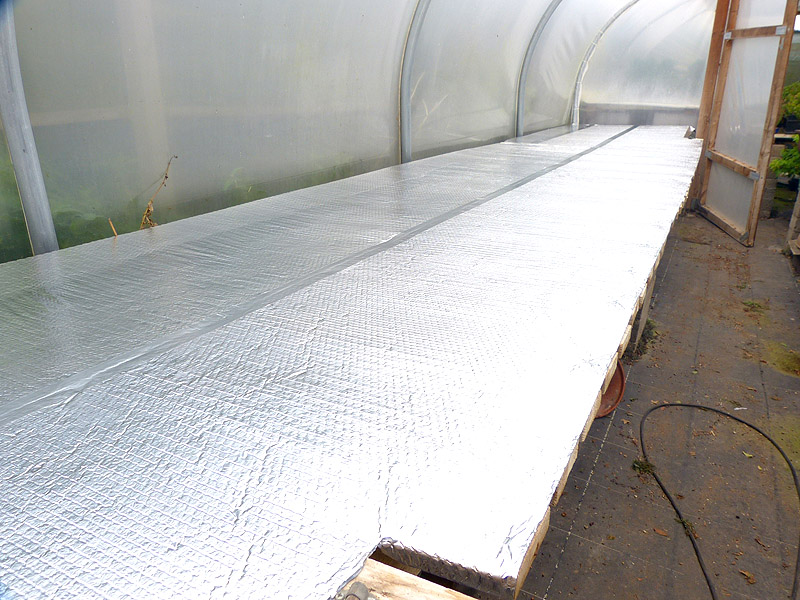 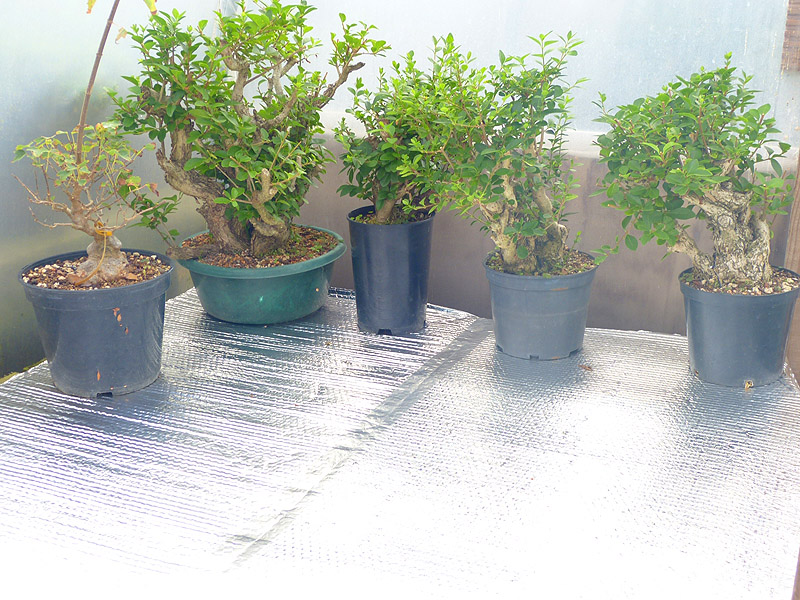 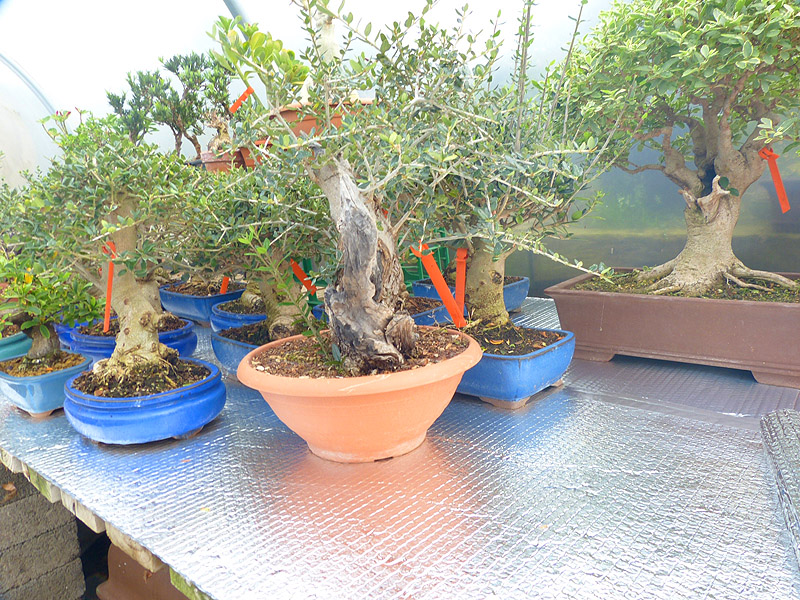 General
Be Careful What You Pick Up
New Delivery Just Arrived