I get a million phone calls and emails every day from beginners who are struggling to get their arms around keeping bonsai. Just last week I heard from a guy who told me he had started his bonsai collection, he had planted 70 bonsai seeds :-0 After some discussion he told me I was wrong and that growing bonsai seed was the only way to make bonsai. Another instance involved a maple we shipped out. The recipient was not happy because it had leafed out red when it was supposed to be green. I tried to explain that green maples often leaf out red in our cold climate but was promptly shot down. Another guy bought an indoor bonsai which died within a week. Despite admitting to not watering, it was still my fault and I was called some very unsavoury things beginning with F. Another felIow called up furious because after several weeks his bonsai looked all shaggy (it actually managed to grow). I can’t even begin to recount the endless tales of woe and incomprehensible nonsense I hear every single day. The tide of bullshit is simply inexorable. I just want to go and work on my bikes, people there are so much more knowledgable.

Back in the early nineties when I started bonsai things were much simpler. I went to the library (remember those!) got every book I could find and ordered every book they had listed. I read everything, got a bunch of plants and had a go. I failed a lot and the more I failed the more I learned. My failures were not ‘somebody else’s’ fault, they were the price of an education. I tried things I should not have tried and made some visually offensive trees. I killed a lot of plants, carved some to death and generally worked my trees into oblivion. That’s how you learn. Nowadays everyone lives in abject terror of making a mistake. Someone once told me the man who never made a mistake never made anything. I think safety nets are for spineless wimps.

I am an old fart now but I keep hearing we live in the “information age”. That being the case how come bonsai folk are mired in unfathomable ignorance? Because you are on my blog in the first place and have got this far I assume you want to know what I think. Firstly we seem to have developed a real aversion to risk, modern society is all about keeping us safe right? There is only one activity I know of that is entirely devoid of risk, being dead. What I love about riding bikes is that at any moment I could find myself all dead, a little excitement in an otherwise fairly dull existence. In an attempt to avoid the risk of failure many folk turn to the the ‘web of lies‘ for advice. Here anyone and everyone who has an opinion is free to express it. However in bonsai nobody has to qualify to have a voice, that’s why someone who discovered bonsai a week ago can call me a ‘dick head’ with impunity. The net result is many beginners and a few who are not beginners are in an absolute daze over what to do about anything and everything. I am yet to see an exposition on which end of a bonsai to put in the soil but I am certain it’s on a forum somewhere!

So what can be done? Bonsai clubs? More forums? Bonsai books? Workshops? Absolutely not. Here are my recommendations based on painful experience.

1. First and foremost, unless you love plants DO NOT get involved in bonsai. Bonsai is 95% horticulture not some poncey highfalutin esoteric art.

2. Get some plants, preferably native to your area. DO NOT buy bonsai, anything alive with roots is good. Get a LOT and set about working with them. Once you have killed the majority you will be getting somewhere.

3. Go get an RHS certificate in horticulture.

4. Buy a copy of “Principles of Horticulture” published by Butterworth Heinemann. read it cover to cover at least once a year.

5. Spend a small fortune tracking down ancient trees in your country. Visit them, sit quietly with them, photograph them and develop a love for them akin to what you might have for your mother.

6. Be prepared for a long haul with painful disappointments and a few highs. Bonsai is a way of telling a story and unless you have the correct experience and attitude towards those experiences you won’t be able to recount the tale. Bonsai is not something we own just to show of to our mates, it’s something we have to live. Given time bonsai becomes as much a part of us as our hair, which i am losing. 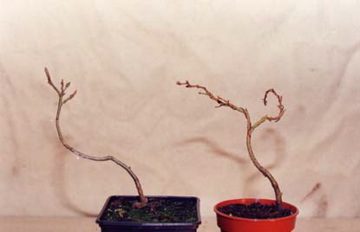