Trust Me, I’m a Professional!

Trust Me, I’m a Professional! Not the best words to come from the mouth of a salesman. Who wouldn’t cringe at the sound of those words or, in my case laugh out loud before making utterance about going and procreating elsewhere.

We all think our jobs suck, right? Well I am sure not everyone does but most of the folk I know would agree. Even my job sucks sometime. Who the hell wants a job (Just Over Broke) but then who the hell wants to hang around the house all day in their underpants watching repeats on TV? It’s not even 7am and I have been sitting here for two hours now and I won’t get finished until 6pm today. In fact every day is like that, running a small business in Britain today is hell but there are good days….. or maybe there are some days less awful that others, depends upon your outlook.

A great day at Kaizen Bonsai is one where new stock arrives. If that stock happens to be yamadori so much the better. I have been forced to become a mercenary old bastard these last few years, paying your way in the world via bonsai will do that to a fella’. I love it when new trees arrive because I have a whole new bunch of stuff to play with. I also love it when I sell those trees because I get a whole bunch of money to play with. However the day after trees arrive i’m back to my grumpy old self because now I have a whole bunch of new stuff to take care of and ultimately try to find new homes for.

Personally I love yamadori, the possibilities resident in wild trees offers so much scope for creativity and a chance to take a battered old wreck and turn it into a jewel, and make something in the world a little better and happier. I bust my hump to sell this stuff but, by and large folk don’t buy it. We can work a tree, put it on Youtube and VERY easily get double the price in a heartbeat. Selling raw material to any but a select few visionary folk is as easy as offering a free tooth extraction with every purchase…. with a hammer.

There are a few astute individuals out there that have figured something out. Buy raw material off me. If I say it’s good then buy it and book a workshop, that way I have to put my reputation on the line. Pay something like 10 or 20% of the cost of the tree for a day and at the end I will either give you a healthy profit to leave the tree behind or you walk out with a tree worth 50% more than you paid. I just can’t figure out why folk are so dense as to not see this. I did it 15 years ago with my mentor Kevin Willson, Paid £400 + £100 for a day. Eighteen months later sold the tree for £1100. Back then that was 3 weeks wages for free and I learned a lot doing it and had fun.

Over the years I have hooked up with a few clever bods. They love bonsai and want the best trees and have figured out how to get them. Last year I had a new delivery of yamadori. I threw a few images up on here and a couple of days later H. phoned me. I was having post delivery blues and so H. quickly turned up ready to give me a kicking and get away with a bargain. This big larch is a strange tree, it’s come from the Alps and is a seedling that set up home is an old dead stump many years ago. H. was pretty keen but had trouble seeing what to do with the tree and so was choking on the price. “Trust Me, I’m a Professional, this will make great bonsai“, probably didn’t help much. However for a quick flip I took a small profit and headed in for a consoling beer.

H. followed my instruction to the letter and a year later rocked up to collect on my promise. We had a beautiful sunny winters day and here’s the result which I failed to secure a deal upon before it was loaded up and carried away. Who’s a happy boy? Not me but Mr H. doubled his money in a year. Maybe my job’s not so bad after all 😉 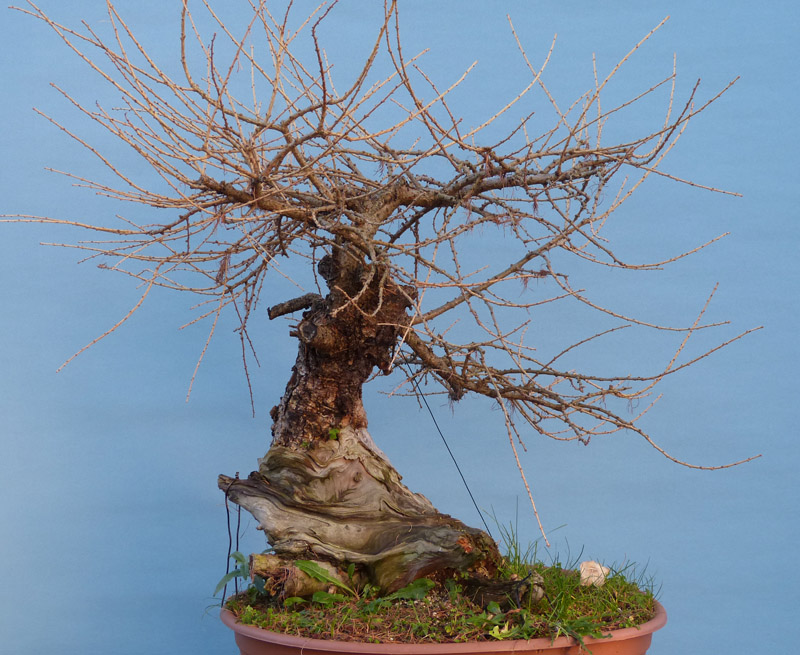 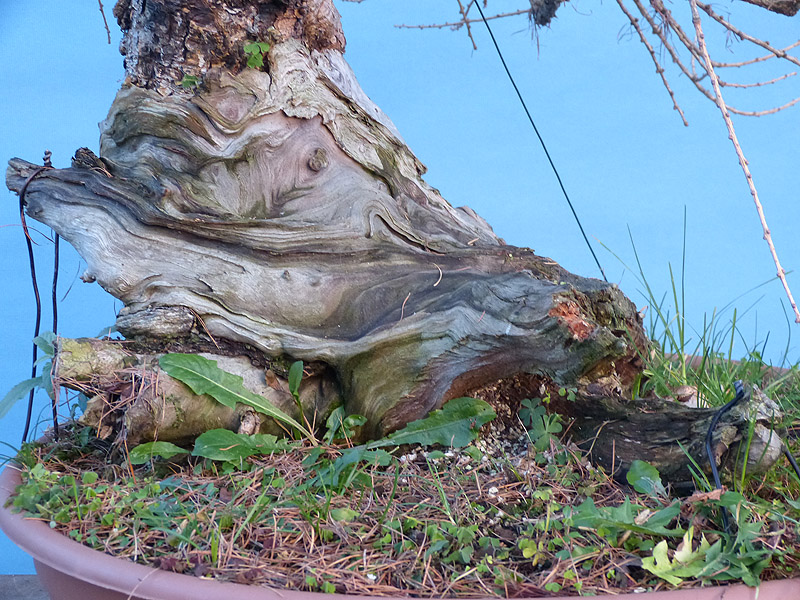 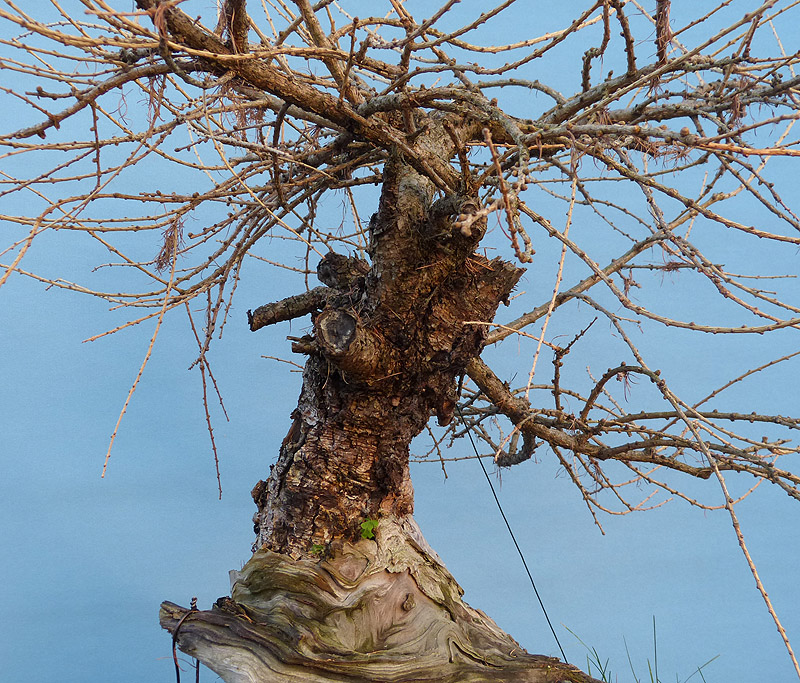 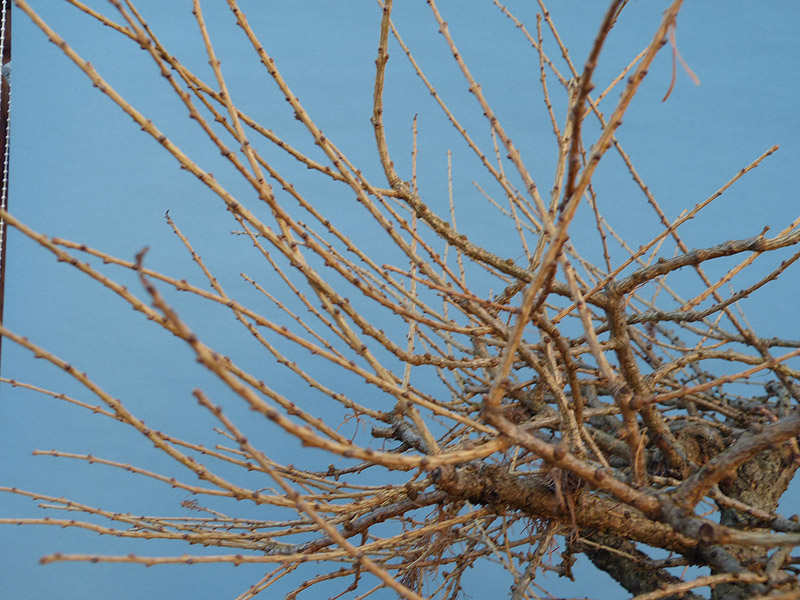 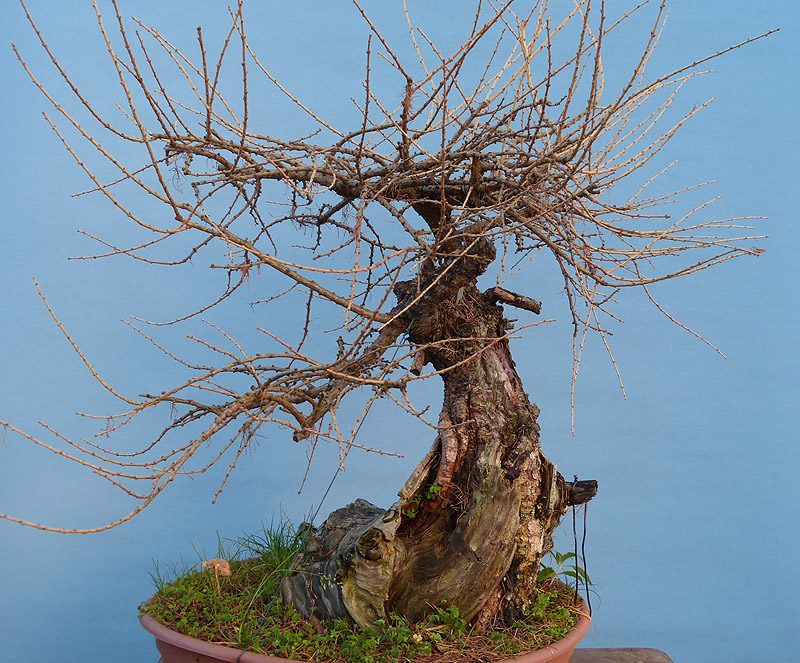 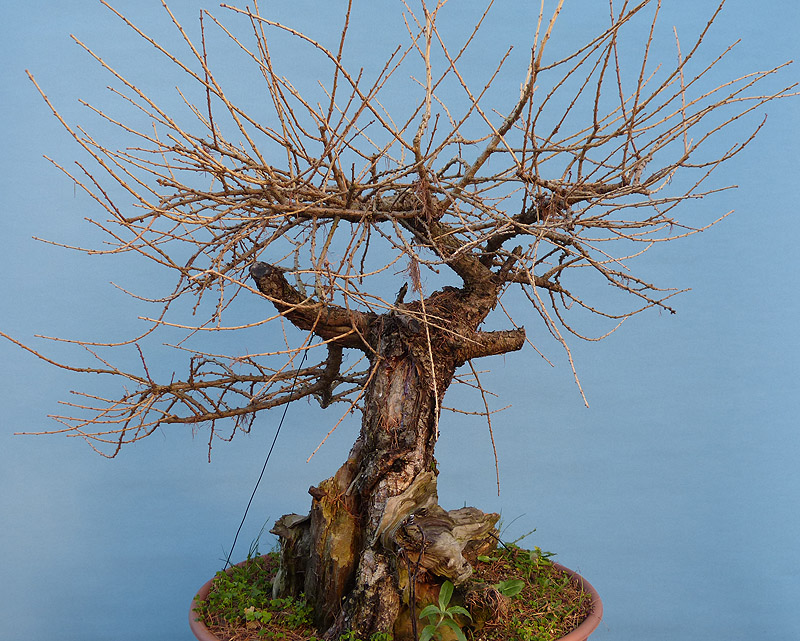 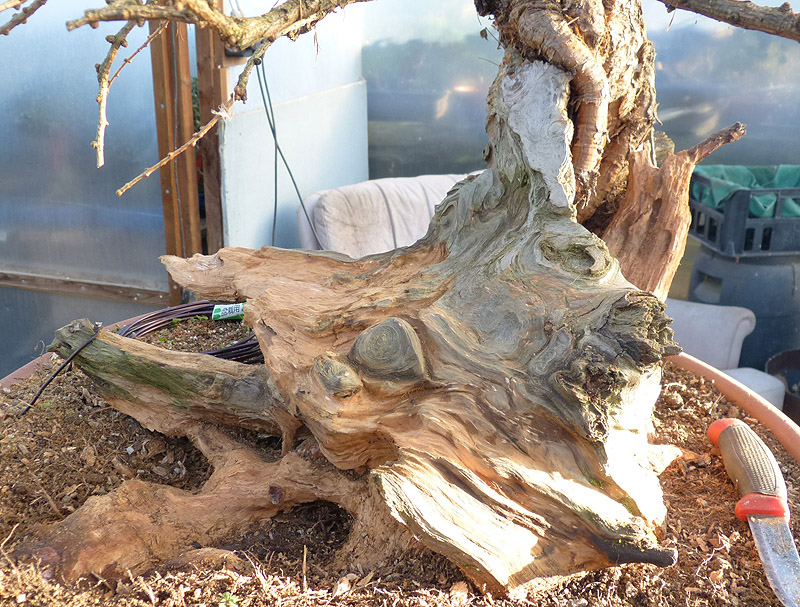 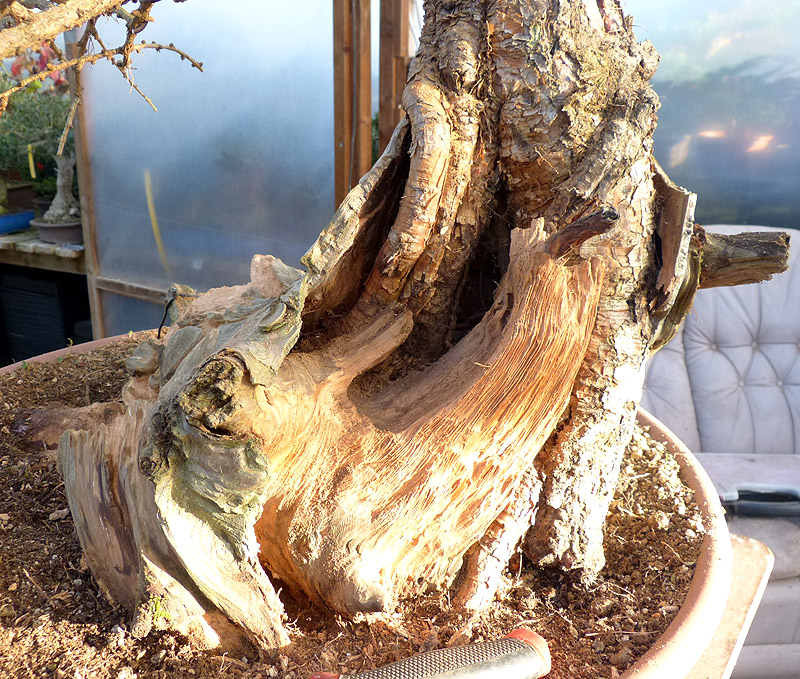 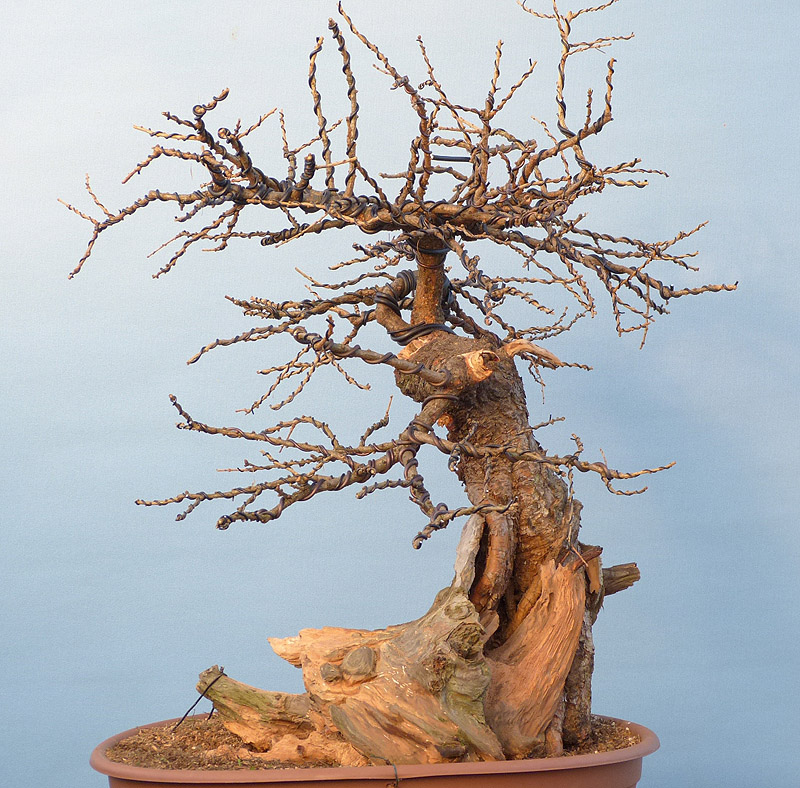 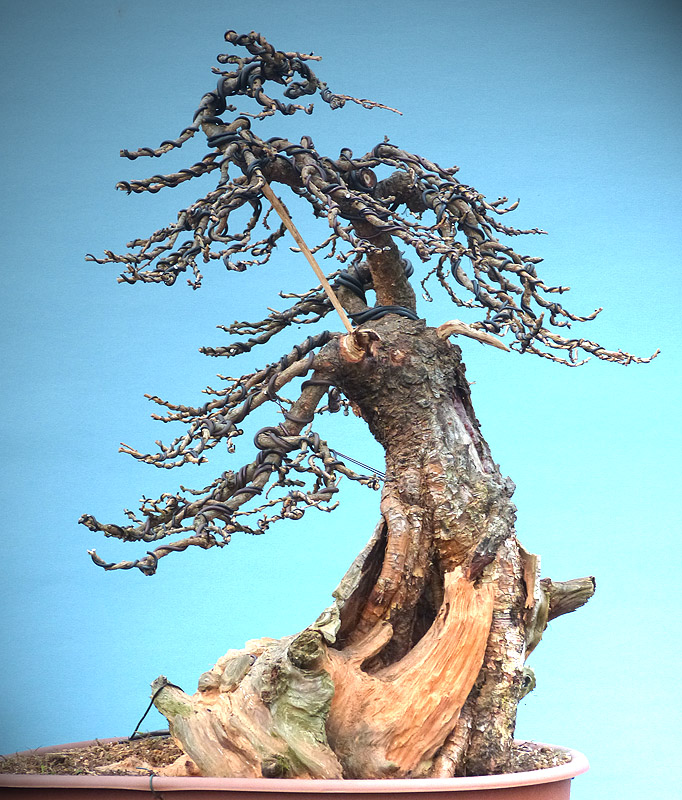 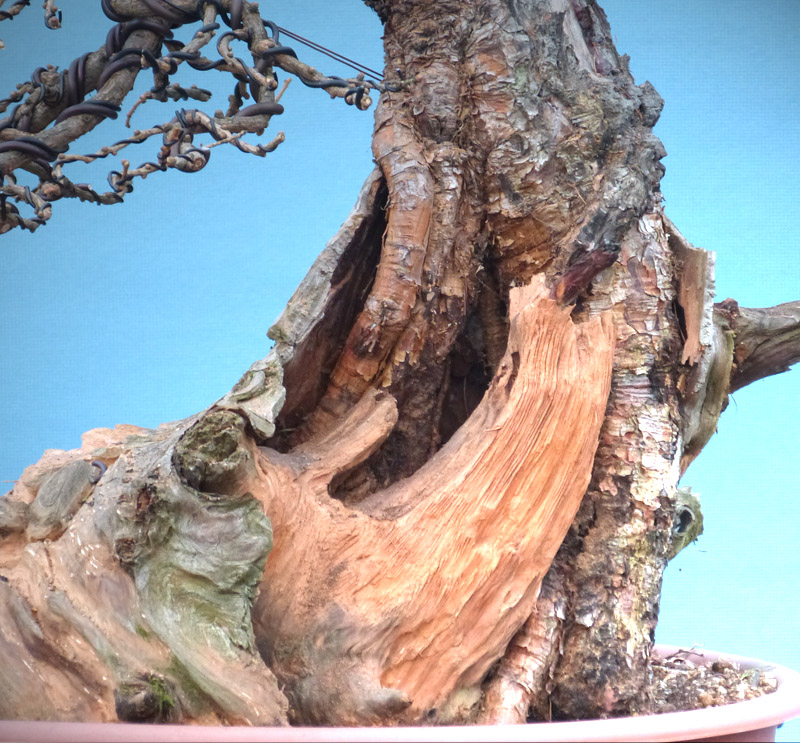 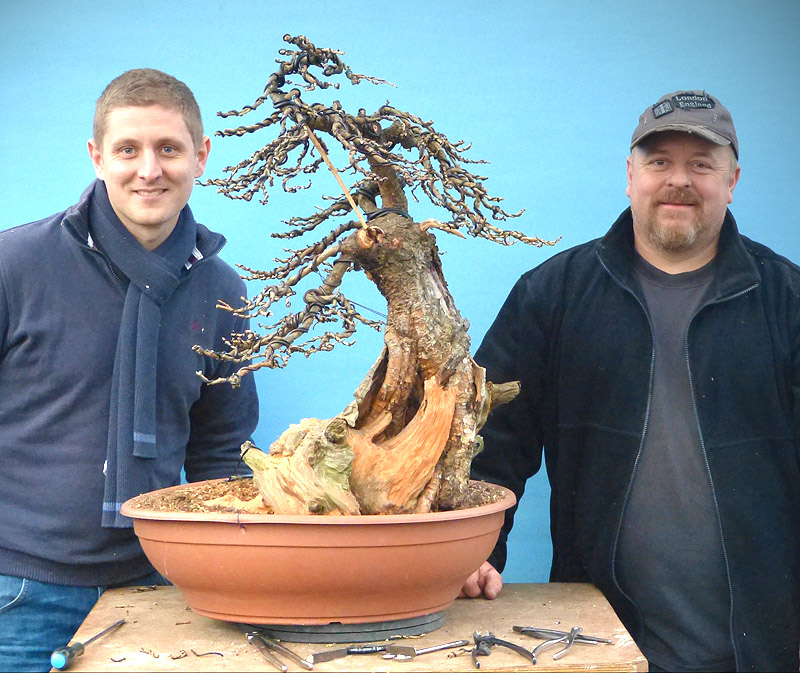 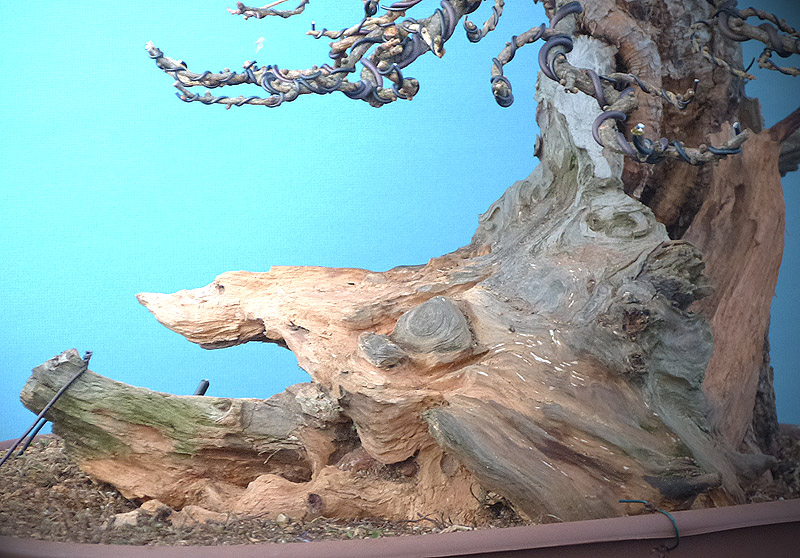 General
Somebody Bring Me Another Glass
There’s More to Life Than Bonsai, But Not Much More.