I was bought up to be a grafter. I started work at age 13 and have been at it ever since. I left school a dumbass with no more than the highest grade in the history of the school for woodwork. In every other respect I was an academic failure because I just couldn’t see the point. Maybe as a result I didn’t get along as quickly as I could have. Maybe my life has been a lot more hard work than it could have been but then I have pretty much attained all the goals i set out to achieve. I have learned that hard work and a willingness to do what others will not can work wonders. Taking calculated risks is an integral part of success too. Over 10 years ago I walked out of a 22 year career in an industry that I hated and stepped out into thin air. Having had no other choice it worked out Ok.

Having spent 22 years in bonsai I do have itchy feet again but do not fear I’m not off anywhere just yet. My journey in this fascinating hobby has been much the same as the rest of my life, a lot of hard work, some success and some failure and a lot of risk taking. Judging by the avalanche of correspondence I receive almost continually most folk want someone like me to help make their bonsai career simple, fail safe and risk free. Many people seem to EXPECT that from me too and get very nasty when I don’t become their guardian angel. Somehow a lot of people have gotten the idea that life is all about being happy and it’s somebody else that is responsible if that’s not the case. If I posted some of the crap I have had from folk on here it would make you cry, it certainly bought a tear to my eyes.

Somebody once said ‘the man who never made a mistake never made anything’. I remember Peter Adams said the only reason people went to his workshops was because he had killed more trees than anyone alive. After all these years I now understand what he was saying. The experience and knowledge gained from failure provides a depth of knowledge and understanding few can match. However I see a lot of people who fail and learn absolutely nothing. Failure is a great opportunity to learn and the bigger the failure the more possibility there is for learning.  Tony Beets said “Lessons cost money, good ones cost lots”. The thing I just do not understand is why folk give up because they fail, that is entirely beyond my comprehension. The only reason to give up is because we are dead and, to date, I have never heard of anyone dying trying to achieve bonsai success.

Over the years I have suffered failure all the way from a mild annoyance to total catastrophe. I  lost my first bonsai to a series of ham-fisted events and at the time that was very expensive. Since then failure has followed me around like a little dog. Every once in a while it nips at my heels but seeing as it hasn’t ripped my face off or chewed my head from my body I carry on. That’s what men do (or should), take responsibility, suck it up, learn a lesson and carry on. If you want to be successful at bonsai don’t try and blame someone else for failure. Don’t go looking for a ‘no win no fee’ parasite of a lawyer. Take the lesson and keep going, never stop and then when you do die get your ashes sprinkled on your trees. Maybe that way you can be of benefit 🙂

Pyracantha (firethorn) is a funny plant and one that folk seem to love or hate. My own opinion is any tree that makes a fine root system, buds from old wood easily, has small leaves, flowers and produces copious quantities of fruit and can be obtained cheaply is worth a look. Over the last few years we have had a steady supply of this species and at very good prices for the quality. The big problem we have experienced is re-potting. Completing the work in spring as growth commences has proven very unreliable. Some trees have been VERY slow to recover, some have lost significant areas and others have died all together. Autumn re-potting has also seen patchy results. For the life of me I could not figure out what was going on. This was happening with everything from young small trees to very old bonsai and was getting expensive.

As the old proverb says. ‘When the pupil is ready the teacher appears’. And so it went. I get a lot of plants from a couple of local landscapers and i recently got a call from one of them about a hedge coming out… pyracantha. My immediate reaction was to turn it down, I have never lifted one of these things and had it survive. I figured that over the height of summer there was no way. However you never know what these guys will turn up and they duly arrived with a truck loaded with some very solid looking pyracantha and a bunch of privets too. I paid the guys and and we dumped the trees into buckets with garden compost and took all the remaining trash to the tip. I figured I had just wasted most of my money and two days wages. D’oh.

A week later I noticed not a single leaf had wilted, even in the very hot conditions we were experiencing. A month later and all the stumps are pushing strong buds from old wood. Now anyone who knows me or has done any work here will know that over the past 5 years we have been moving more and more re-potting into the summer. It started with olives way back and now includes about 40% of what we grow. Full on re-potting from June to end of August. The success has been absolutely spectacular. I should point out we do not re-pot ANY deciduous trees during this period. However any evergreen, semi-evergreen or conifer we have worked has shown SPECTACULAR results if treated correctly.

Earlier in the year a very good friend asked me when we should re-pot his pyracantha and I had to say I really didn’t know because of the mixed results I had been having. A month ago he came to a workshop and offered up the tree as a guinea pig. I offered a caution but it was brushed aside. We duly completed the re-pot and as of last weekend the tree was doing extremely well. No leaf loss, new buds opening out and flowers forming too. My motley collection of stumps are also doing very well.

And THAT”S how we learn to do bonsai 😉 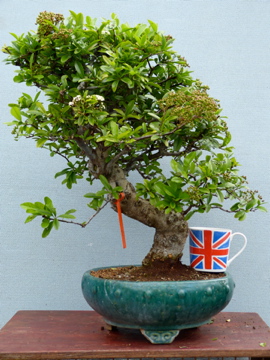 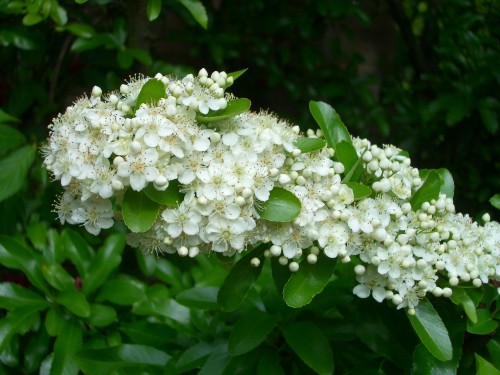