Ever since I was old enough to walk I have been getting covered in crap. No matter how hard I try everything I touch gets filthy. If I put on a pristine white shirt I can pretty much guarantee something close to hand will spontaneously explode within half an hour and that’ll be my thin veneer of cool right out the window.

I recently spent the afternoon cleaning out my van. My van works hard and my plan is to be buried in it when I go, it’s a piece of crap but it’s MY piece of crap and I kind of like it in a perverse sort of way. So in a spirit of neighbourly charity I thought a good clean would help raise the appearance of the surrounding area. She was looking pretty good when I got finished up. Less than 12 hours later I got a call from a guy I know asking if I wanted a privet hedge he was pulling out. I doubt I have to go into detail about what happened next…….

Whatever happened to the gentle art of bonsai ? 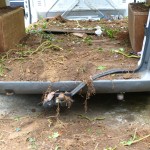 The story of my life ! 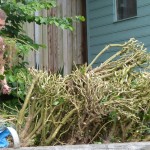 I just attract this crap. 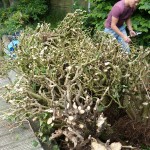 We’re going to need some pots. 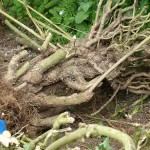 Every hedge has a grandaddy in it 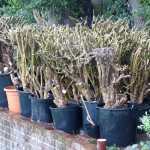 You can’t even imagine how much work this all was and there’s still the van to do. 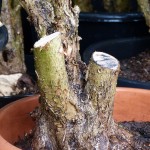 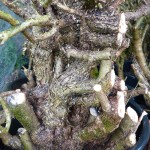