A wiser man that I once said that in order to call a tree bonsai it needs to have spent 20+ years in a pot. A tree that has spent 20 years in a pot is not necessarily a bonsai but, a tree that has been worked and cultivated with care and skill over 20 years might, just, be worthy of the title.

Semantics aside it has to be said that re-potting very special bonsai is not easy. Choosing the right time, both in the development cycle of the tree and the time of year is not easy. Re-pot bonsai too often and the growth habit will be all wrong. Choose the wrong time of year and you run a risk of losing the tree altogether. Also choose the wrong soil mix for the development phase of the tree and you could easily make, or undo years of work.

Here at Kaizen Bonsai we re-pot around 500 trees every year. Most are here for a while then move on and are forgotten. Today however we had a special treat, it’s time to re-pot the famous “Plucking Yew”. And before someone points out the obvious, YES i do know it’s summer. That’s when taxus are re-potted on our nursery.

Our trade mark taxus (collected 1999) was last re-potted in 2008 into a fine little Gordon Duffet pot but, over the years the tree has filled out, much like me, and the old pot was just too small. In fact the pot was all wrong, it looked way to small and cultivating the tree in it was becoming increasingly difficult. I ordered a replacement with which I am very happy even though I have had both cars and motorcycles that cost less.

As you can see from the pictures the yew was pretty solid in it’s old pot. Taxus do very well in this condition but there does come a time when action is needed before the tree begins to suffer. A skilled eye will be able to recognise when the time is right for the work to be necessary.

So all done and fit for another 5+ years by which time maybe we can call it BONSAI.

To see the story of this tree see our gallery. http://www.kaizenbonsai.com/plucking_yew.htm 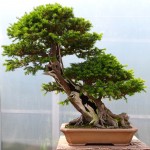 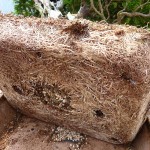 Half an hour later it’s out of the pot. 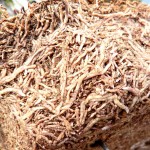 How good roots should look! 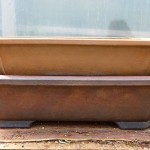 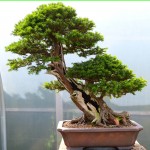 A marriage is made. 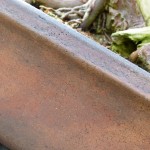 Only Gordon Duffet can do this! 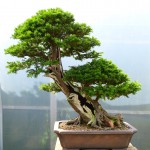